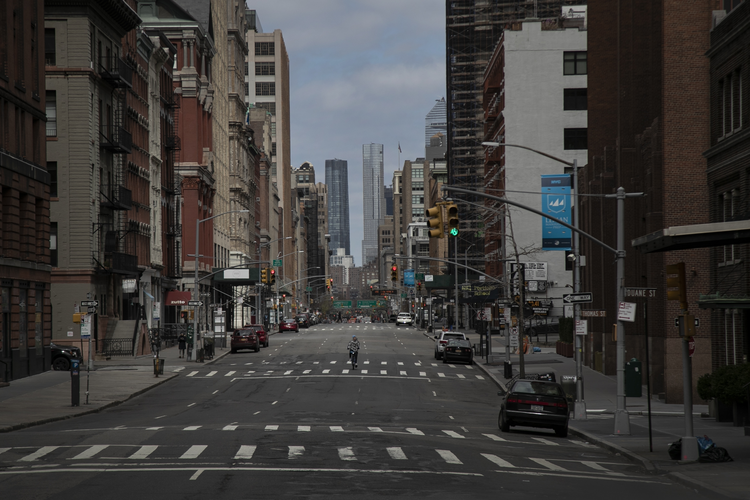 A cyclist rides his bicycle down the middle of a main road in downtown New York, on Sunday, March 22, 2020. New York City's mayor prepared Sunday to order his city behind closed doors in an attempt to slow a pandemic that has swept across the globe and threatened to make the city of 8.5 million one of the world's biggest coronavirus hot spots. (AP Photo/Wong Maye-E)

NEW YORK (AP) — No more play dates, no more picnics in the park with friends, no more pickup games of basketball. No more commuting or using public transport — unless absolutely essential. New York implemented dramatic restrictions Sunday to slow a pandemic that has killed more than 14,000 people worldwide and was threatening to make the state one of the biggest hot spots.

As coronavirus infections soar — or in anticipation that they will — leaders warned of a critical shortage of medical supplies. Spain was erecting a field hospital in a convention center, British health workers pleaded for more gear, saying they felt like "cannon fodder," and President Donald Trump ordered mobile hospital centers be sent to Washington, California and New York.

Cuomo and New York City Mayor Bill de Blasio also called for getting everything from masks to ventilators, as well as doctors and other medical workers to New York, warning a mounting death toll might grow more steeply without more federal help.

Dr. Anthony Fauci, director of the National Institute of Allergy and Infectious Diseases, promised on CBS' "Face The Nation" that the medical supplies are about to start pouring in and will be "clearly directed to those hot spots that need it most."

"No American is alone as long as we are united," Trump said.

But efforts for a quick aid package from Congress faltered. The U.S. Senate voted against advancing a nearly $2 trillion rescue package. Democrats argued it was tilted toward corporations rather than workers and health care providers. But negotiations continued.

The delay shook investors. U.S. futures declined before Monday's reopening on Wall Street, which is coming off its worst week since 2008. With travel and public entertainment halted and restaurants and bars closed, large swaths of the economy have suddenly stopped.

Pressure was building on the largest event still on the global calendar: the Tokyo Olympics. Japan's Prime Minister Shinzo Abe said a postponement would be unavoidable if the games, no scheduled to begin in July, cannot be held in a complete way.

The Canadian Olympic Committee said it won't send athletes unless the games were postponed by a year, and Australia's officials told athletes to prepare for a delay. The IOC said it will take up to four weeks to consider postponing.

Worldwide, more than 335,000 people have been infected and more than 14,600 have died, according to Johns Hopkins University.

There were more than 33,000 cases across the U.S. and more than 400 deaths. New York state accounted for 117 deaths, passing Washington state, the initial epicenter of the U.S. outbreak, in the number of fatalities.

Along with the staggering numbers, there are individual reminders of the reach of the virus. Republican Rand Paul of Kentucky became the first U.S. senator to announce he was infected. Opera superstar Plácido Domingo announced he has COVID-19, and German Chancellor Angela Merkel put herself into quarantine after her doctor tested positive.

For most people, the new coronavirus causes only mild or moderate symptoms, such as fever or coughing. For some, especially older adults and people with existing health problems, it can cause more severe illness, including pneumonia. Some 98,000 people have recovered, mostly in China, where the virus was first detected in late December.

As the virus has spread and testing has increased, the United States has grown to the third-most cases in the world. But deaths from COVID-19 continued to rise in the hot spots of Italy, Spain and Iran.

Italian Premier Giuseppe Conte went on live TV to announce that he was tightening the country's lockdown. Italy now has more than 59,000 cases and 5,476 deaths.

''We are facing the most serious crisis that the country has experienced since World War II,'' Conte told Italians during a broadcast at midnight.

Iran's supreme leader refused U.S. assistance to fight the virus, citing an unfounded conspiracy theory that the outbreak could be an American plot. Ayatollah Ali Khamenei's comments came as Iran faces crushing U.S. sanctions over its nuclear actions. Iran says it has 1,685 deaths and 21,638 confirmed cases of the virus — a toll that experts from the World Health Organization say is almost certainly underreported.

The world kept shutting down, too. The United Arab Emirates is suspending all passenger flights and the transit of airline passengers through the country for two weeks. Dubai has the world's busiest international airport, which is a vital hub connecting West and East. Singapore said it will fully shut its borders beginning Tuesday, and New Zealand will go into a full lockdown for about four weeks.

The British government had a stark message for those marking Mother's Day on Sunday: Visiting your mother could kill her. Instead of parties, lunch or tea, Prime Minister Boris Johnson implored Britons to call Mom on a video chat.

Doctors in Britain made urgent pleas for more protective equipment as the number of coronavirus patients in U.K. hospitals soared to more than 5,000. Almost 4,000 medical workers signed a letter to the Sunday Times saying front-line staff felt like "cannon fodder." They warned that medics would die if they did not receive better equipment.

Spain has the fourth-largest number of infections — more than 28,500 and 1,750 deaths. Intensive care units in some areas were close to their limits, and a field hospital with 5,500 beds was going up in a convention center in Madrid. Health officials warned more than 10% of the country's health workers were now infected with coronavirus.

"We can't just repeat the slogans that we will get through this together," said Dr. German Peces-Barba, a lung specialist at Fundación Jiménez Díaz hospital in Madrid.

In anticipation that the worst is yet to come for New York, Cuomo has told hospitals to increase their current bed numbers by at least 50%. Predictions from health officials are that COVID-19 cases needing advanced medical care will top 100,000 in the state in the next month or so.

Hospitals feeling the crush are creating emergency room overflows and dedicating COVID-19 wings, with officials in the New York City borough of Brooklyn saying a number of medical centers were becoming overwhelmed.

Health care workers said they were being asked to reuse and ration disposable masks and gloves.

"The building is on fire," said Dr. David J. Ores, describing the chaotic and ever-changing guidance medical professionals have been given. "It's a mad scramble."

One glimmer of hope was China, which peaked last month with thousands of cases daily and where most people infected have now recovered. The National Health Commission reported 39 new cases Monday, all "imported" in recent arrivals from overseas, continuing a trend of nearly no domestic infections.

The original epicenter city of Wuhan, which was the first city put under lockdown because of the virus, began allowing limited movement for the first time since late January. Public transportation was starting to resume, and the municipal government said Monday residents confirmed as healthy could leave their residential neighborhoods if they have proof they are returning to work.

Leaders in many parts of the United States were sounding the same note that global leaders were: Stay away from other people. Officials called them different things — social distancing, sheltering in place, or in the case of Nashville, Tennessee, a "safer at home" order.

"We're all in quarantine now. Think about it," Cuomo said.

He expressed exasperation that people — facing an invisible threat rather than billowing smoke or blowing snow — were gathering in parks, playing basketball or having block parties, rather than staying home or staying 6 feet (1.8 meters) apart as ordered.

As Californians, too, headed to beaches and parks despite their state's stay-at-home order, officials closed some strands and trails.

Enforcement of any of the U.S. orders is uncertain. Most locations simply broke up large gatherings and sent people home because one of the last things health officials wanted was putting people in confined spaces like jails.

Many governments were even releasing nonviolent inmates. Trump said he was weighing early release of elderly nonviolent offenders in federal prisons.

Provide feedback on this article
Join the conversation: Login or create an account
Before you can comment, you need to update your profile to include your first and last name, as required in our comments policy. Then reload this page and you'll be set up for commenting. Update your profile
Advertisement
More: Coronavirus