Don’t ask for whom the Brexit bell tolls … 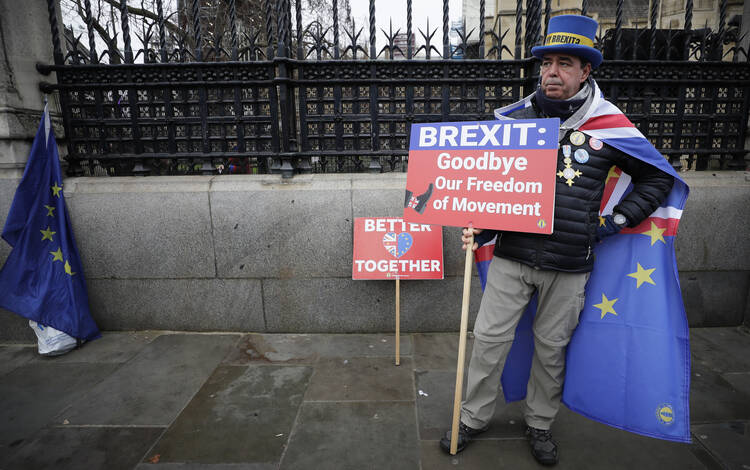 Anti-Brexit campaigner Steve Bray holds banners as he stands outside Parliament in London on Jan. 30, 2020. Although Britain formally leaves the European Union on Jan. 31, little will change until the end of the year. (AP Photo/Kirsty Wigglesworth)

You might not get excited about clock tower and church bells tolling and flags fluttering, but that is where we have got to in our public life here in Britain this week during the final countdown until the United Kingdom officially detaches its constituent nations from the European Union—two of them, Scotland and Northern Ireland, unwillingly. As a moment approaches that is certainly historically massive, one of great triumph or crushing disaster according to your Brexit leaning, Britons are winding ourselves up over a clockwork bell and getting into a flap about a flag.

Bells first. Recently elected Prime Minister Boris Johnson, basking in a parliamentary majority that looks unassailable for now, chimed in with a suggestion that bells across Britain should ring out at on the last day of January at the moment that Brexit would be official. As final proof that those appalling Europeans have been oppressing Britons all these years, the bells would sound at 11 p.m. U.K. time, continental Europe being mostly one hour ahead of us in Britain. The loudest “bong” of all would have come from Big Ben, at the Houses of Parliament in central London. But the 13.7-ton Big Ben, and the Elizabeth Tower that houses him, has been under repair for some time.

Big Ben’s restorers made it known that the one-off cost of making the famous bell serviceable for one night would be excessive; Mr. Johnson proposed crowdfunding the cost, which could reach 500,000 pounds. This notion met with howls of protest but not before over 270,000 pounds had been raised, despite the country experiencing a record number of appeals to food banks, increasing homelessness and low wages. Catholic and Anglican bishops and associations of bell-ringers refused consent widely, as the prime minister’s plan unraveled.

As Brexit loomed, three of the United Kingdom’s devolved legislatures withheld consent for the process. London simply ignored these votes.

On to flags. In Edinburgh, capital of Scotland (one of the United Kingdom’s dissenting nations), the European Union flag currently flies outside the devolved Scottish Parliament building at Holyrood, alongside the Scots Saltire, or St. Andrew’s Cross, and the Union flag of the British state. Which of these flags should flutter after Jan. 31 is, if you will, whipping up a storm of public consternation. Who cares? Quite a lot of us, it would appear.

The European Union flag has to come down on the evening of Jan. 31. So ruled the parliamentary body charged with the building’s maintenance. The difficulty with this decision is that the E.U. flag, that circle of stars on a blue background, is also the flag of the Council of Europe, a 47-state (pre-Brexit) body formed in 1949.

The current United Kingdom even after Brexit will remain a member of this bloc. Some argued that the E.U. flag should fly beyond 11 p.m. on the 31st, reflecting the substantial majority vote to remain in the European Union both among Scottish voters and in the Scottish Parliament. An attempt at a compromise suggests flying the flag on one day each year. After a fractious vote on Jan. 29, the E.U./Council of Europe banner will continue to yet wave.

Two constituent nations of Britain’s uneasy union failed to vote for Brexit; the largest, England, voted to leave. And as the actual day of departure loomed, three of the United Kingdom’s devolved legislatures, including Northern Ireland’s power-sharing assembly at long last reconstituted, withheld consent for the Brexit process. London simply ignored these votes.

In Scotland, just shy of two-thirds of the public had voted “remain.” As the end grew closer this week, many recalled how, at the first Scottish independence referendum in 2014, pro-union politicians were lining up to tell voters that the best guarantee for protecting E.U. membership would be to vote against separation from the British union. Now, that assurance having proved worthless before the reality of Brexit, new demands for a second independence referendum are being heard.

Unionists still try to claim that it was only the amalgamated vote of the entire union that counted during the Brexit vote, not the sentiment within the borders of the kingdom’s constituent nations. But Britain is not, and never has been in the slightly more than three centuries since the English-Scottish union, a unitary nation-state; nor has it been since the United Kingdom came into being in 1800.

There have also been sporadic attempts to portray the revived Scottish independence movement and its political leaders as anti-English, even racist.

Having seen how little traction they got from this flimsy claim, unionists have resorted to a remark made in 2014 by former First Minister of Scotland Alex Salmond that the independence ballot represented a “once in a lifetime” or “once in a generation” vote. That was never official policy and was expressed as his personal view. Now Prime Minister Johnson has based his rejection of the Scottish government’s formal request for referendum-holding powers largely on this dubious claim.

There have also been sporadic attempts to portray the revived Scottish independence movement and its political leaders as anti-English, even racist. That accusation quickly unravels in the absence of any actual evidence; it fools few, and certainly not the substantial number of campaigning “English Scots for Independence”—people who have moved to Scotland from the south, finding a not only a home there but considerably more tolerant social policies and inclusive attitudes. Polling is finding that now over 60 percent of Scotland’s residents, transplants and natives alike, believe the Scots government should decide on whether to hold the referendum. Other polls suggest the number who would then vote for independence is creeping upward again.

U.K. unionists and nationalists, in this final week of Britain’s European union, have been hell-bent on presenting the last day of January as a moment of national liberation, celebrating a people throwing off the oppression of a foreign empire. A commemorative 50 pence coin will hit the streets on Brexit day with, the government hopes, enough publicity to help Britons forget the fate of the coins minted for the previous near–Brexit Day last year—since melted down, at great public cost.

Some have taken to social media to announce that they will refuse to accept these coins while a only-in-Britain style controversy has raged over whether its inscription, “Peace, prosperity and friendship with all nations,” should have had an Oxford comma. At the same time, Scotland’s First Minister, Nicola Sturgeon, made known plans to announce major next steps toward a second independence referendum on Brexit Friday.

Limp flags, silent bells and now grammatically dubious coins: sounds and fury signifying something as this country approaches a moment of surpassing importance. In a widely circulated quote attributed to him, George Orwell tried to tell us, but we have not listened: “A people that elect corrupt politicians, imposters, thieves and traitors are not victims…but accomplices.”