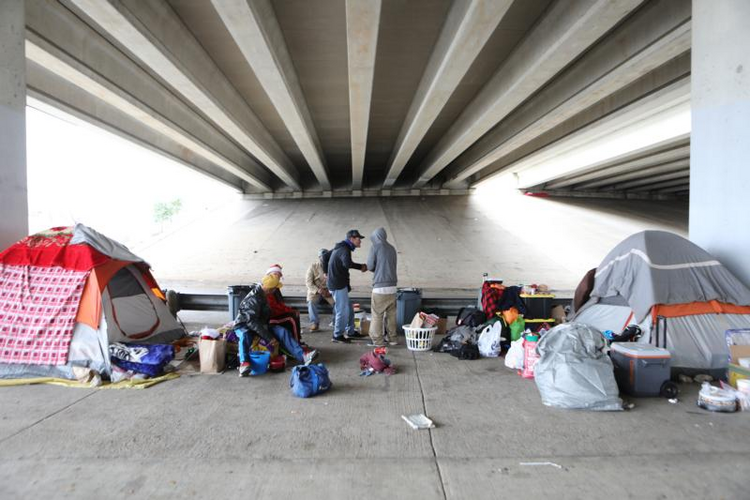 Homeless men are seen under a bridge on Christmas day in Austin, Texas. Catholic Charities staff are warning that the coronavirus pandemic presents a stark threat to the U.S. homeless population. (CNS photo/Bob Roller)

In Southern California, Ana Guillen, program manager for the San Pedro Region of Catholic Charities of Los Angeles, said the weight of addressing homelessness in her region is already at a breaking point.

"While our agency has helped house many homeless families and provided temporary shelter for them, there are just too many people in California for this to seem like it's making a dent," Guillen told Catholic News Service.

In response to the coronavirus spread, which is beginning to have a significant impact on life in all of California, Guillen said her agency is providing over-the-phone consultations and communications with homeless families.

"We will do this as long we can," she said. "The concern for the state during this time is keeping homeless people stationed in one area so that they are not spreading any illnesses or catching something themselves.

"This is difficult because the numbers are large and the question arises: Where will we house these homeless people during this time?" Guillen asked.

The number of COVID-19 cases in Los Angeles County was 144 as of March 17, with additional cases in nearby counties.

The state's focus on closing down shops, restaurants and gyms will be effective, Guillen noted, but the ongoing problem is to find a quick way to house homeless people.

"If we had an answer for that now, then we wouldn't have a homeless crisis in California. My hope is, during these times, we can figure out a plan for the homeless community so that they too feel that they are a part of our society, because they are," she said.

In Northern California, a San Francisco Bay Area lockdown order is similar to lockdown measures taken in Italy, Spain and China, and was the first of its kind in the U.S.

The lockdown order, now in effect until April 7, requires 6.7 million residents in San Francisco and five other Bay Area counties -- Santa Clara, San Mateo, Alameda, Marin and Contra Costa -- to stay home unless it is absolutely necessary to go out.

"We are the largest homeless care provider between the Golden Gate bridge and the Oregon border so we are definitely focused on preventative measures, cleanliness and providing information so that the people we are serving can take care of themselves," said Jennielynn Holmes-Davis, chief program officer for Catholic Charities Santa Rosa in Sonoma County, California.

"Homelessness was a crisis even before this crisis, so self-quarantining at home isn't applicable -- we have to think creatively on how to help (the homeless)," Holmes-Davis said, noting that her agency has some 500 homeless people under care on any given night at a dozen different sites.

"We are doing a lot of extra cleaning at our shelters' sites every day and taking a lot of guidance from the state and local government by dispensing cleaning supplies, educating individuals on what is going on and making sure that people who are experiencing homelessness are getting taken care of," Holmes-Davis said.

"But we can't quarantine people and will have to work outside if that becomes the situation."

Holmes-Davis said the problem for social workers right now is assimilating the fast moving flow of information and directives from state and local governments along with alerts from the Centers for Disease Control and Prevention.

"We are trying to stay plugged in to the county and state to make sure we are in compliance with them in order to make sure we can stay open to provide care and have a place for our employees to show up to," she said, adding that she has two large worries.

"We are trying to be aware of unintended consequences (of the pandemic and economic crisis) and the long term impact on what all this will be doing to our community in terms of a new wave of homeless. What happens when low-wage workers lose their jobs if they can't come to work, if businesses close, if they can't get child care?"

In the Lafayette, Louisiana, region, Ben Broussard, chief communications officer of Catholic Charities of Acadiana in the Lafayette Diocese, said his agency is "praying for the best but preparing for the worst. Right now we don't have anybody displaying symptoms."

Catholic Charities, he said, is trained to forecast the coming challenges posed by the crisis.

He is worried the homeless are particularly vulnerable because, as a population, they have poor access to health care and have underlying health conditions.

"A lot are tri-morbid in terms of having health conditions, a substance abuse disorder and a mental health illnesses -- three things that make the risk of infection more dangerous," he said.

"For the safety and well-being of those we serve, we have worked to isolate our (Catholic Charities) campus. That means suspending the use of volunteers. We have suspended taking in-kind donations and people driving up and dropping off things. At this point we cannot risk it."

Catholic Charities of Acadiana shelters some 100 individuals at St. Joseph Shelter for Men and St. Michael Center for Veterans in Lafayette, with about 50 people typically sleeping on overflow mats on the floor one next to one other because the agency believes it is safer to be inside than outdoors.

But the pandemic has forced shelters to modify sleeping arrangements for their clients.

"What we had to do is clear out the floor in our soup kitchen to accommodate for that 6 feet of distancing (between individuals) and help with the overflow that is now coming. We also have a shelter for families that is situated off campus," Broussard said.

The agency is well supplied with hand sanitizer to distribute to the homeless, he said, and a local safety company has donated a supply of N95 respirators/surgical masks.

In South Florida, Patrice Schwermer, the Key West-based Catholic Charities program director for Monroe County, noted that although there is not yet a known outbreak of COVID-19, the town has declared a state of emergency and begun closing tourist attractions in anticipation of the virus spreading.

"I am particularly concerned for the vulnerable elderly and those who are compromised (health-wise)," Schwermer said.

"I think this moment is an opportunity for us faithful to not be fearful but to have love in our hearts and see how we can be of service to others," she said, adding that "this is about our common good, about solidarity and we are all in this today."

Catholic Charities of the Archdiocese of Miami has housing units in Key West, but those residents are currently housed at an assisted living facility while construction is completed on a new workforce development facility in Key West.

"Here in Monroe County, the real concern now is the economic fallout: We are so heavily based on tourism and service economy that the fear of a hard economy and fear of losing jobs, of not being able to pay bills is big here," Schwermer said.

Five thousand miles away, Lisa Aquino, CEO of Catholic Social Services for the Archdiocese of Anchorage, Alaska, said the state has so far reported only three confirmed cases of COVID-19, but local governments have been aggressive in addressing the crisis.

Aquino said she is in conversation with the city of Anchorage to move some of the area's homeless into two large concert and sports venues there to create more space for social distancing.

"We operate the largest shelter for adults experiencing homeless at our Brother Francis Shelter and there is not enough distance between people to be safe here so they are opening up another space for the first item in our city -- it's a really big deal," Aquino told CNS.

The Brother Francis Shelter serves some 2,300 clients a year with 240 persons housed there on any typical night, usually in close quarters including bunk beds.

"We are pretty far removed from other places so if our health care system is overwhelmed, we will be in a difficult position," she said, adding the agency has been "doing a lot of prevention work," promoting hand-washing and asking those with a cough to wear a mask.

But supplies of masks and hand sanitizer were dwindling, Schwermer said.

"We are experimenting with other things as well. We are always trying to control infections and disease in our shelters just through awareness, looking out for people and through education."

Show Comments ()
Comments are automatically closed two weeks after an article's initial publication. See our comments policy for more.
Provide feedback on this article
Join the conversation: Login or create an account
Before you can comment, you need to update your profile to include your first and last name, as required in our comments policy. Then reload this page and you'll be set up for commenting. Update your profile
Advertisement
More: Coronavirus / Housing