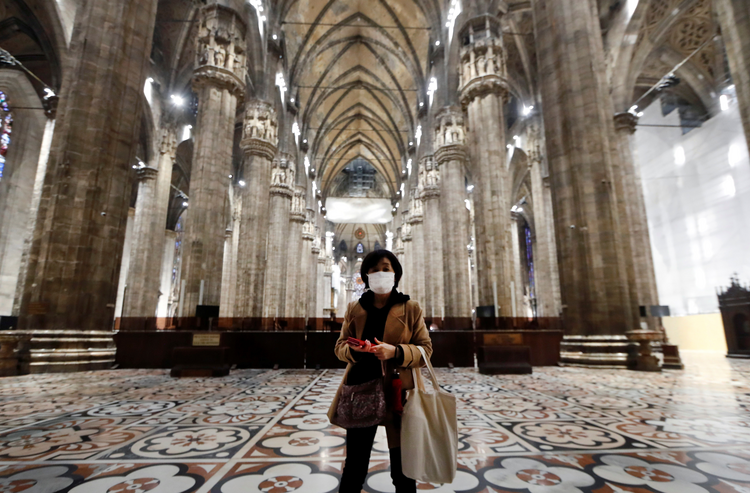 A tourist wearing a protective mask visits Milan's famed cathedral, commonly referred to as the "Duomo," as it reopened to the public March 2, 2020, for the first time since the coronavirus outbreak. (CNS photo/Yara Nardi, Reuters)

Catholic aid agencies are protecting their staff's safety as they increase their worldwide efforts to stop the spread of the coronavirus COVID-19.

Catholic dioceses, too, are following protocols issued by their government health ministries.

Catholic Relief Services, which works in more than 110 countries, is "restricting all but the most mission-critical travel, with contingency operational plans in place should the disease take hold in any of the countries where the organization operates," it said.

The U.S. bishops' international relief and development agency is working "to prevent and mitigate the spread of the deadly virus" while protecting the safety of its staff, it said in a March 3 statement.

CRS suspended its education programs for children in camps in Afghanistan and is now "working with local health agencies to educate those families on preventing infection and distributing 60,000 bars of soap," it said. In Cambodia, it is piloting a work-from-home arrangement.

The agency, part of the Caritas Internationalis network, noted it has vast experience "fighting fast-moving disease outbreaks," citing the reach of its partners in vulnerable and remote communities.

Caritas Internationalis has increased checks on its staff and is distributing surgical masks to people in need in Hong Kong, where two people have died among the 103 people infected. Members of the Caritas network of aid agencies are running risk awareness and hygiene education campaigns in the countries where they work.

More than 3,000 people have died globally from COVID-19, which emerged in the Chinese city of Wuhan in December. The World Health Organization said that, by early March, more than 92,000 infections had been confirmed.

Dioceses around the world took precautions such as recommending that Communion is received only in the hand and that people do not shake hands during the sign of peace at Mass, especially in places frequented by pilgrims.

The French Shrine of Our Lady of Lourdes announced that pilgrims were still welcome, but the pools the sick bathe in, hoping for healing, would be closed temporarily.

The Latin Patriarchate of Jerusalem issued precautionary guidelines to follow during celebration of Masses, noting the local church's "unique situation."

"Thousands of pilgrims from different parts of the world come to the Holy Land to visit the holy sites and churches," the patriarchate said, noting that "in some cases, the pilgrims are also in contact with our local churches and communities."

Its directive said Communion is to be received only in the hand and made the "preventive suggestion" that holy water fonts be emptied, especially in the holy sites and sanctuaries.

The Israeli education ministry told Catholic News Services that 14 students from the Rosary Sisters' High School in East Jerusalem were in self-quarantine following their return from a conference in Genoa, Italy.

The spread of the coronavirus in Europe has intensified, with the majority of cases in Italy; as many as 20 countries on the continent recorded new cases.

The Italian Civil Protection Service said 3,089 people in Italy had the coronavirus as of 6 p.m. March 4. Of those, 107 have died and 276 have recovered. Schools closed in all of Italy March 5-15.

The Archdiocese of Milan suspended all public celebrations of Mass until further notice in compliance with Italian health ministry precautions.

Schools and universities were closed to prevent the spread of the coronavirus in Iran, where at least 77 people died and more than 2,300 people were infected. But while holy shrines were disinfected, the sites did not close. Millions of people visit the shrines every year, with many kissing and touching them.

Two men in Iran who defied health warnings could be jailed after videos circulated of them licking holy shrines. In one of the videos, a man is seen at the Masumeh shrine in Qom, saying, "I'm not scared of coronavirus," before licking and kissing the gates.

Catholics in the Philippines have been asked not to kiss or touch the cross when they venerate it on Good Friday, April 10.

Instead, they should "genuflect or make a profound bow" before the cross during the veneration of the cross, according to guidelines issued Feb. 20 by the Philippine bishops' conference. Three cases of the coronavirus have been documented in the Philippines, with one resulting in death.

The Chinese government temporarily closed all places of worship and banned all group religious activities in efforts to contain the virus' spread.

In mainland China, more than 80,000 people had been infected with the virus, and more than 2,900 had died, according to China's national health commission.

Only three cases of infection have been recorded in Africa -- one in Nigeria, one in Egypt and one in Algeria -- with no deaths.

Ghana's bishops directed all Catholics to receive Communion only in the hand. In a March 2 statement, Archbishop Philip Naameh of Tamale, president of the Ghanaian bishops' conference, encouraged ministers of the Eucharist to wash their hands or use sanitizer before and after distributing Communion.

The bishops also urged parishioners to "avoid handshakes and embracing one another" during the sign of peace.

Caribbean countries are increasingly closing their borders to visitors from areas affected by the coronavirus. The Caribbean has one confirmed case in the Dominican Republic and three in the French overseas territories of St. Barthelemy and St. Martin.

"There is no change to the church's liturgical celebrations" yet, the Archdiocese of Port of Spain said in a March 3 statement from Trinidad, noting that it would provide any assistance needed if an outbreak occurred.

Contributing to this story were Judith Sudilovsky in Jerusalem and Damian Avevor in Accra, Ghana.

Show Comments ()
Comments are automatically closed two weeks after an article's initial publication. See our comments policy for more.
Provide feedback on this article
Join the conversation: Login or create an account
Before you can comment, you need to update your profile to include your first and last name, as required in our comments policy. Then reload this page and you'll be set up for commenting. Update your profile
Advertisement
More: Vatican / Humanitarian Aid / Coronavirus