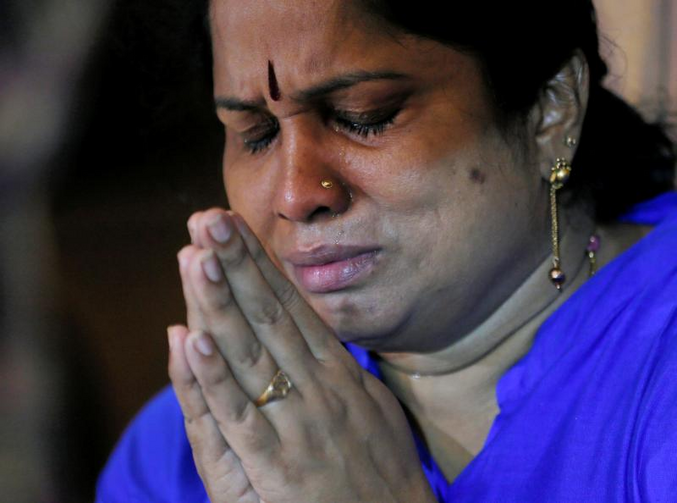 A family member of victims cries while praying during the reopening ceremony of St. Anthony's Shrine in Colombo, Sri Lanka, June 12, 2019, months after it was closed because of an Easter bombing. A new poll shows that although more than half of U.S. Catholics are "very concerned" about the persecution of Christians around the world, the level of concern has declined in the past two years.

NEW YORK (CNS) -- Over half of U.S. Catholics are "very concerned" about global Christian persecution, but this group accounts for 52% of Catholics today, compared to 58% in winter 2019 -- a decline of more than 10%, according to a new poll.

It also showed the number of U.S. Catholics who think Christian persecution is "very severe" declined by 11% compared to a year ago, dropping from 46% to 41%.

Results of the third annual nationwide poll examining the views of U.S. Catholics on the global persecution of Christians were released March 4.

The poll was conducted by McLaughlin & Associates for Aid to the Church in Need-USA, an international papal agency that supports suffering and persecuted Christians in more than 140 countries.

Catholics who described themselves as being "very devout" were most concerned about Christian persecution, but the poll showed that even this group has ranked human trafficking as the issue of greatest concern for three consecutive years.

"While 52% of American Catholics show strong concern about the persecution of Christians, it is nevertheless disheartening to see the drop in their number compared to a year ago," George Marlin, chairman of Aid to the Church in Need-USA, said in a statement.

"It's telling," he said, "that U.S. Catholics consider human trafficking, poverty, climate change, and the refugee crisis -- as important as these issues are -- to be more important than the persecution of Christians."

"Two years ago, the genocidal campaign waged by ISIS against Christians and other minorities in Iraq and Syria had only just begun to decline," Marlin said, "but memories of that atrocity have faded since then."

"This may well help explain the apparently lesser concern" about Christian persecution by U.S. Catholics, he said.

In listing the countries where they believe Christian persecution is most severe, U.S. Catholics identified Iran as the worst offending nation, followed in order by North Korea, Iraq, Syria, Pakistan and Saudi Arabia as the next five worst-offending countries.

Other findings of the poll showed:

-- As for their local bishop speaking out on Christian persecution, 27% said the bishop was "very engaged" on the issue, up 12% compared to a year ago; 24% were "unsure" about their bishop's level of involvement; and 12% said their bishop was "not engaged" at all.

-- Asked about Pope Francis' focus on the issue, 47% of U.S. Catholics said he was "very engaged" on the issue, down by 8% from a year ago; 16% were "unsure" about the pope's involvement on the issue; just 8% said the pope was "not engaged."

Respondents also were asked to rank by importance policies by the U.S. government and other Western countries to help persecuted Christians. "Putting diplomatic pressure on offending countries" was ranked as most important by U.S. Catholics, followed by economic sanctions and emergency asylum for victims of persecution. Next came financial support of persecuted Christian communities, while military intervention and "the military training and arming" were said to be less important.

Marlin said the survey showed that U.S. Catholics believe the U.S. church in America "can do much more when it comes to calling attention to the gravity of Christian persecution." Given the percentage of Catholics who said they were "unsure" about their parish's or bishop's engagement on the issue, or said they were "not engaged, education at the parish and diocesan levels "remains of crucial importance," he added.

He called on the U.S. Catholic church to do more "to inform and galvanize the faithful" on this issue.

He also pointed to current "hot spots of Christian persecution" that he said "must be put in the spotlight" to grab the attention of U.S. Catholics: in Africa, "the persistent Islamist terror" targeting Christians, particularly in Nigeria and also throughout the Sahel region; in India, "the increasingly fanatical Hindu nationalism that threatens Christians; and in China, "the ongoing repression of the church's freedom."

This was a nationwide poll of 1,000 Catholic adults conducted Feb.6-13. Survey invitations were distributed randomly to respondents within predetermined geographic areas; all interviews were conducted online. The margin of error is plus or minus 3.1 percentage points.

Show Comments ()
Comments are automatically closed two weeks after an article's initial publication. See our comments policy for more.
Provide feedback on this article
Join the conversation: Login or create an account
Before you can comment, you need to update your profile to include your first and last name, as required in our comments policy. Then reload this page and you'll be set up for commenting. Update your profile
More: Religious Freedom