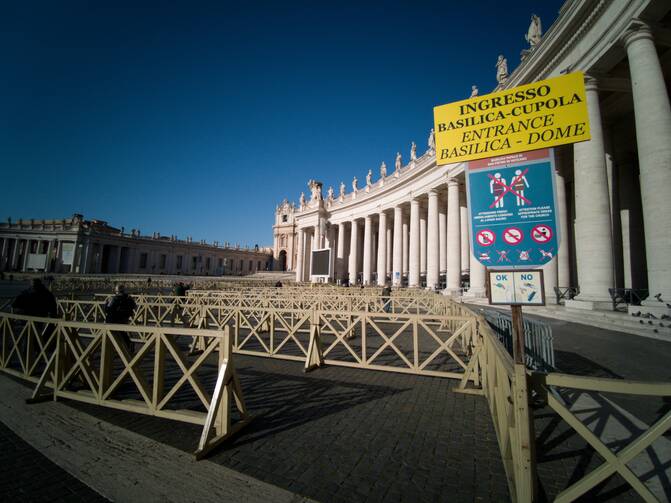 Several visitors enter an empty security queue before visiting St. Peter's Basilica at the Vatican on March 4. Visitors and pilgrims to churches, museums and landmarks in Rome have sharply declined following an outbreak of the COVID-19 coronavirus in northern Italy. (CNS photo/Junno Arocho Esteves)

The Vatican is likely to follow Italy’s lead in taking strong measures to prevent the spread of the novel coronavirus and may suspend all the public audiences with the pope over the next two weeks. This is the conclusion most observers in Rome drew from a statement issued by the director of the Holy See’s press office, Matteo Bruni, on March 5, almost 24 hours after the Italian government took drastic steps to counteract the spread of a virus that had by then infected 3,089 people in Italy and led to the deaths of 107 others.

But, in a small indication of how rapidly the contagion is affecting Italy, by the time the Vatican spokesman sent his communique to the media, the number of victims had risen dramatically—the total number of cases rising to 3,858 and deaths to 148—amid growing concern in Rome and throughout the nation. Mr. Bruni told reporters: “Regarding the activities of the Holy Father, the Holy See and the Vatican City State in the coming days, measures are being studied aimed at avoiding the spread of Covid-19, to be implemented in coordination with those adopted by the Italian authorities.”

His communique should be read in the light of the statement issued by the Italian prime minister, Giuseppe Conte, around 6 p.m. local time on March 4. He then announced that the government had ordered the closure of all schools and universities throughout the country until March 15, as part of a nationwide effort to prevent an epidemic. The government decreed the closure of all cinemas and theaters, sporting events and all public gatherings involving large crowds. It instructed Italians to wash their hands regularly, to remain at a distance of one meter from each other and to avoid shaking hands or kissing as is the normal greeting in this land. It also advised elderly people with health problems to remain indoors during this period since they are more vulnerable than others to serious illness because of the virus.

In a small indication of how rapidly the contagion is affecting Italy, by the time the Vatican spokesman sent his communique to the media, the number of victims had risen dramatically—the total number of cases rising to 3,858 and deaths to 148.

America learned that from the very first signs of the spread of the virus, the Vatican has sought to coordinate its strategy closely with that of the Italian Ministry for Health. It had done likewise during the SARS virus, but it is even more closely coordinating with Italian authorities this time. This first became evident more than a week ago when those queuing up for the security controls for entrance to St. Peter’s Square for the public audience on Ash Wednesday and for last Sunday’s Angelus. Security checks were carried out on one person at a time, with a distance of one to two meters between each person being maintained.

The Vatican has arranged for its medical personnel to be on standby to deal with any suspected cases detected at the controls or during audiences. It also provided sanitizers for all Vatican officials who have to deal with the public.

The number of pilgrims and Romans that attended last Sunday’s Angelus in St. Peter’s Square was significantly reduced: Those present could be counted in hundreds, not the thousands as has usually been the case. The reason is clear: People are scared they might catch the virus and stayed away. It is noticeable, too, that there are no longer queues to enter St. Peter’s Basilica or the Vatican museums.

Vast numbers of pilgrims and tourists have canceled visits to Rome and the Vatican. Travel agencies and hotels report that some 40 percent have canceled their bookings, and the number of cancellations are expected to rise in the coming weeks. The deadly epidemic is expected to have a major negative impact on pilgrims who were planning to come to Rome for the Easter celebrations led by Pope Francis. These religious ceremonies normally attract vast numbers from all over the world.

Few people from the north of Italy, and especially Milan and Venice, are traveling to Rome or vice-versa. Taxi drivers are without work. One driver said on March 2 that he normally gets at least two customers an hour, but he now considers himself lucky if he has even one. La Campana, one of Rome’s oldest restaurants—over 500 years old—had seven guests at 10 p.m. on March 1. Its 150 seats are normally fully booked.

The impact of the virus on Italy, which has become the epicenter of the coronavirus in Europe, has been devastating, and this has had profound consequences for all businesses that are linked to Vatican tourism.

Measures to counter the virus were already visible at the presentation of a book in the Marconi Hall of Vatican Radio on March 5. The number of seats at the presentation was limited to 30 and a meter’s distance was kept between each chair as shown in a tweet posted by the Hungarian Ambassador to the Holy See, Eduard Habsburg.

Two major international events involving Pope Francis have been postponed. The first was the postponement of the gathering scheduled for the end of March in Assisi on “The Economy of Francesco,” that would bring together some 2,500 young economists and other participants from 115 countries. It has been rescheduled for Nov. 21. And some days ago, the Congregation for Catholic Education announced the postponement until next October of the international Global Education Compact meeting that had been scheduled for May and would also have brought together thousands of young people from many countries.

The impact of the virus on Italy, which has become the epicenter of the coronavirus in Europe, has been devastating, and this has had profound consequences for all businesses that are linked to Vatican tourism.

Pope Francis is still recovering from what appears to have been a bad cold that was not in anyway connected to the coronavirus. It is not clear yet if he will be well enough to appear at the papal study window on the third floor of the Vatican’s apostolic palace next Sunday, March 8, given that he coughed several times during his appearance the previous Sunday.

One can only speculate at this point until the Vatican publishes its own guidelines and measures, but already we know they are almost certainly to be in line with those enforced by the Italian state. The Vatican’s statement would seem to suggest that all public audiences and large gatherings in the Vatican may be canceled. This could include Pope Francis’ public audience next Wednesday, March 11.

It may also mean that pilgrims and tourists may only be able to visit places like the Vatican museums, St. Peter’s Basilica and the catacombs in small numbers. Italian security services are heavily involved in the control of checkpoints at the Vatican, putting their members at risk of infection.

Pope Francis is the bishop of Rome, and on March 5 the Vicariate of Rome diocese announced that in accordance with the government’s decrees it has suspended all pastoral activities, except for sacramental ones, because of the virus. Consequently, events such as catechetical courses, marriage preparation courses, retreats, pilgrimages and any other pastoral group activity are suspended until March 15. The Pontifical Gregorian University has suspended all academic courses and activities until March 15, including an upcoming theological conference, “Doing Theology in the Face of Abuse,” that had been scheduled to begin on March 11.

The Italian government on March 5 also postponed an important national referendum on the reduction of the number of Italian parliamentarians that was scheduled for March 29.

The Japanese embassy has postponed its reception for the celebration of the birth of the emperor of Japan scheduled for March 12 until a later date, yet to be decided. The Argentine Centre in Rome has also suspended its activities until March 15. These postponements or cancellations are but a few of the many events now being suspended in a country where fear of the coronavirus is growing because no Western government seems to have yet found a way of containing it. The rate of new cases reported in China, where the virus originated, appears to be decelerating.