Bethlehem holy sites to be closed after coronavirus reported at hotel 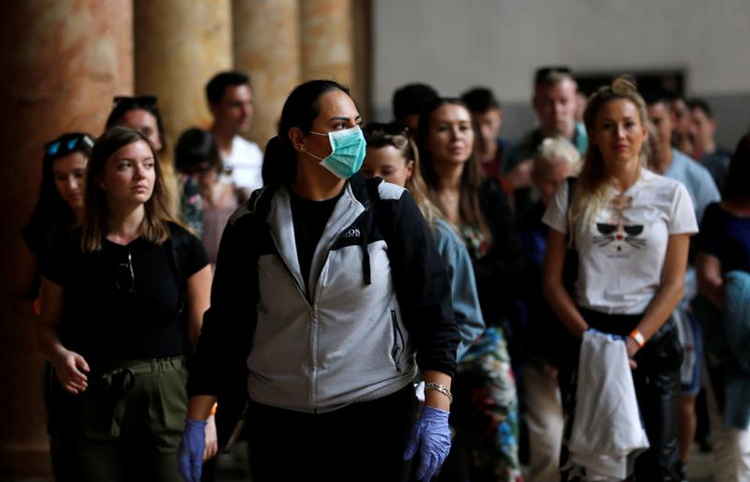 A tourist wearing a mask as a preventive measure against the coronavirus visits the Church of the Nativity in Bethlehem, West Bank, March 5, 2020. (CNS photo/Mussa Qawasma, Reuters)

JERUSALEM (CNS) -- The Latin Patriarchate of Jerusalem urged its faithful to cooperate with the Palestinian Authority Ministry of Health, following its order March 5 to close all schools, universities, mosques and churches, including the Church of the Nativity and Shepherd's Field.

The affected areas were in the West Bank: Bethlehem, Beit Jala, Beit Sahour and Jericho for 14 days following seven reported cases of the coronavirus in the Bethlehem and Beit Jala area.

"Unfortunately, this danger is already in our midst, and with a sense of responsibility, we must cooperate with the authorities and those responsible for public health for the good of all," Archbishop Pierbattista Pizzaballa, apostolic administrator, said in a statement.

A spokesman for the Palestinian Ministry of Tourism said seven employees of the Angel Hotel tested positive for the COVID-19 coronavirus. The cases, which were tested in an Israeli hospital, are suspected to be connected to a group of Greek pilgrims who had stayed in the Beit Jala hotel and who were also diagnosed with the virus after they returned home.

Minister of Health Mai al-Kailah told a news conference that the seven people had been placed in quarantine together with the hotel staff and two doctors who had come into contact with them. The minister has been counseling people to remain calm and to follow official directives, including washing hands often.

As of March 6, the Palestinian Authority will close off the areas to all tourist groups, although those groups already in the Bethlehem would be permitted to remain until the end of their planned stay. All shops and restaurants will be closed, and all workshops, conferences and other social and sport activities have also been canceled.

In the Latin Patriarchate statement, Archbishop Pizzaballa provided guidelines for the local parishes and churches in those towns.

The parish churches were to remain open only for individual prayer. In addition to the previous directives it gave, Archbishop Pizzaballa said Masses could be celebrated only for groups no larger than 15 people, as long as there is at least one meter between each person. The Stations of the Cross could be held in open spaces weather permitting, he said; if not families should pray it privately in their homes.

He invited parish priests to organize online streaming of Masses and religion classes, and said he left it to individual priests to find ways that would allow the faithful to receive the Eucharist, such as holding outdoor Masses as long as they were in accordance with the Palestinian Ministry of Health guidelines.

"We encourage everyone to pray at home, read the Bible, and continue to fast, asking God for mercy and forgiveness," said Archbishop Pizzaballa.

"I know that not everyone will agree to these guidelines, but I call on everyone to a sense of responsibility and unity," he added. "The strength which comes to us from communion with Christ Jesus does not take away our human responsibility to protect, care for and heal our environment."

Judith Sudilovsky - Catholic News Service
Provide feedback on this article
Join the conversation: Login or create an account
Before you can comment, you need to update your profile to include your first and last name, as required in our comments policy. Then reload this page and you'll be set up for commenting. Update your profile
Show Comments ()
Comments are automatically closed two weeks after an article's initial publication. See our comments policy for more.