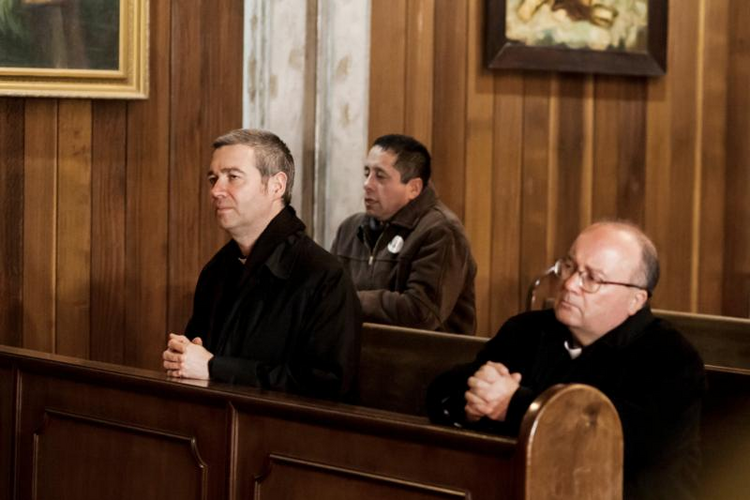 Father Jordi Bertomeu Farnos and Archbishop Charles Scicluna of Malta, who investigated clerical sexual abuse in Chile, are seen praying inside a church in Osorno, Chile, June 14, 2018. Pope Francis will send them to Mexico City March 20-27 to help church leaders with safeguarding and to listen to victims. (CNS photo/Fernando Lavoz, Reuters)

VATICAN CITY (CNS) -- After receiving a request from Mexico's bishops for assistance in handling cases of the abuse of minors, the Vatican Congregation for the Doctrine of the Faith is sending its top abuse investigator to Mexico.

Archbishop Charles J. Scicluna of Malta, adjunct secretary of the doctrinal congregation, will be accompanied by Spanish Father Jordi Bertomeu Farnos, a congregation official, on a visit to Mexico City March 20-27 to help church leaders with safeguarding and to listen to victims.

Pope Francis had sent Archbishop Scicluna and Father Bertomeu to Chile in 2018 to listen to survivors and investigate charges of abuse and its subsequent cover-up. Their report and supporting documentation -- totaling more than 2,300 pages -- helped correct the pope's belief that abuse accusations were exaggerated; after a later meeting with Pope Francis at the Vatican, every bishop in Chile offered his resignation.

Archbishop Scicluna and Father Bertomeu returned to Chile a few months later to help dioceses learn how to respond to cases.

The March visit to Mexico City was not being described as a Vatican-led investigation, but rather a "mission" to offer "technical advice, fraternal assistance, dialogue that helps the church in Mexico" take "the right direction in the needed response to victims of sexual abuse of minors by clergy," Matteo Bruni, director of the Vatican press office, said March 2, according to Vatican News.

Explaining the Vatican mission, the bishops' conference of Mexico and its national council for the protection of minors said, "We have tried to fight in a responsible, transparent and clear way against the culture of abuse and the system of cover-up that allows it to continue."

"This conviction, which comes from accompanying victims in their pain, seeking justice and healing, led us to request support from the Holy See through the apostolic nunciature," said a press release March 2 signed by Archbishop Rogelio Cabrera Lopez of Monterrey, conference president, and Auxiliary Bishop Alfonso Miranda Guardiola of Monterrey, general secretary of the conference and general coordinator of the protection council.

They hoped the mission would help the church, and specifically its bishops, continue to safeguard minors, and improve the church's response to cases, "seeking the action of civil and canonical justice under the principle of 'zero tolerance' so that no case goes unpunished in our church," it said.

"We urge our brother bishops of Mexico and senior superiors of religious congregations to take advantage of this opportunity with the greatest willingness and openness," it added.

A communique from the apostolic nunciature, dated March 2, said a meeting for all of Mexico's bishops would be held March 20 at the bishops' event-center near Mexico City and a meeting for all members of the country's conference of major superiors of men and women religious at their headquarters March 23.

Archbishop Scicluna and Father Bertomeu were to be available to meet with "everybody who wants to contact them to share their experiences or to receive guidance or assistance" at the nunciature, it said.

Those interested in taking part were to contact the nunciature by phone or by email at nunciatura.mexico@diplomat.va.