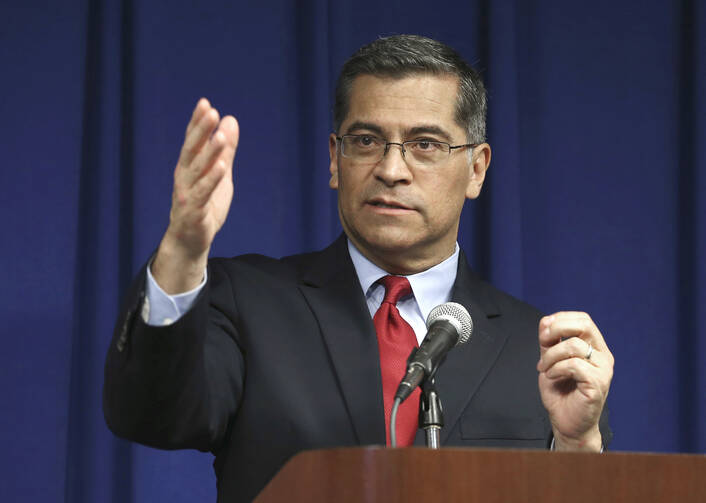 LOS ANGELES (AP) — California's top prosecutor said Thursday that he believes there are more victims of child sex abuse than those listed in charges against the leader of Mexico-based megachurch La Luz del Mundo and several followers.

"It would be hard to believe that, based on the information that we're collecting, that it's only these four individuals," Attorney General Xavier Becerra said at a press conference, urging any victims to come forward.

Can a parishioner consent to a relationship with their priest? New scandal raises question
Jack Jenkins - Religion News Service

Church officials have denounced the charges as slander and defamation and said Joaquín García remains the spiritual leader of La Luz del Mundo, which claims more than 5 million members worldwide.

"He is the epitome of love and care and respect," Jack Freeman, a minister in San Bernadino and the church's United States spokesman, said Thursday outside a temple in East Los Angeles. "Everything that he does and teaches and he stands for goes against these allegations."

Freeman also decried Becerra's remarks as "immature and unnecessary for a man of that position."

"I expected a lot more professionalism out of him," he said. "It sounded like they were pre-judging him as guilty."

Those in custody made their first court appearance in Los Angeles on Wednesday but did not enter pleas.

Bail for Joaquín García was doubled to $50 million after prosecutors presented evidence that he could flee the United States, Becerra said.

The attorney general said the extraordinary bail amount, believed to be the largest ever set in Los Angeles County, was requested because of a "credible fear" that Joaquín García could raise bond money from his many followers.

"We have a great apprehension that Mr. García will raise the money to get a bond to bail himself out," he said.

Followers Thursday afternoon outside an ornate East Los Angeles temple — some of whom had flown or driven to California when they heard the news — said they've known Joaquín García for decades and he deserves the presumption of innocence.

"We know of his integrity, of his character, of his community work," Bibiana Ochoa, 42, who flew in from Salt Lake City when she heard the news, said. "We support him. We know him; we know he's a good man."

James Nuñez, 32, of Los Angeles, said Christianity is no stranger to animosity.

"We're used to always having someone always against Jesus Christ or the apostles," he said.

The followers — most of the men in suits and women in long dresses or skirts with their heads covered in scarfs — mingled quietly Thursday before 6 p.m. prayers as motorists drove by on a busy street, some shouting or jeering at them.

Becerra, however, repeatedly referred to Joaquín García as "sick."

"No law of California, no law of humankind and certainly no law of God would permit to occur what Naasón Joaquín García is alleged to have committed in this case against young girls and others," he said.

The four victims cited in the complaint were members of the church in Los Angeles County, he said.

Joaquín García — who was a minister in Los Angeles and other parts of Southern California before becoming the church's leader — coerced the victims into performing sex acts by telling them that refusing would be going against God, authorities said.

The attorney general said the investigation resulted from a tip that came in through a website seeking victims of clergy sex abuse.

The defendants' arraignment is set for Monday.