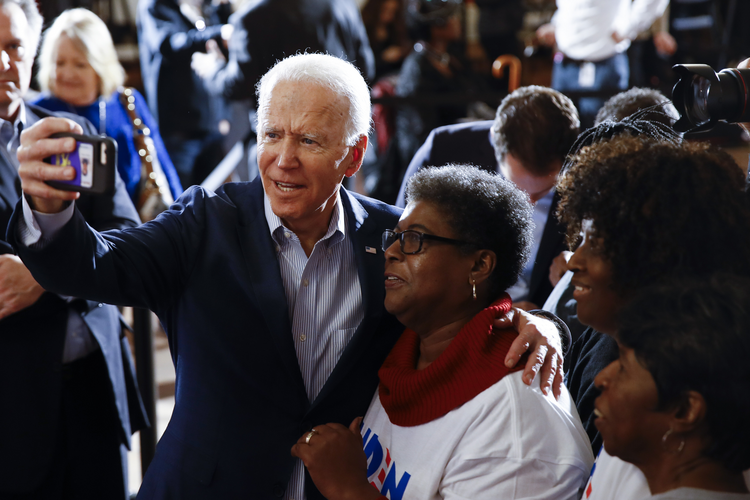 Americans tend to view the Democratic candidates for president as a particularly secular group, even though three of the top contenders speak regularly about their own faith. And white Catholics and Hispanic Catholics differ somewhat on how religious they believe Democratic candidates are, according to a new report released Feb. 27 by the Pew Research Center. The findings come despite occasional talk of religion from the candidates on the campaign trail, most recently this week in South Carolina, where two of the top contenders cited Scripture.

According to the report, 60 percent of U.S. adults viewed Senator Bernie Sanders of Vermont as “not too” or “not at all religious.” Mr. Sanders, who would be the first Jewish president in U.S. history, has said he does not participate in “organized religion” but that he has been formed by Judaism.

Still, he speaks about moral themes, and he, perhaps more than any other candidate, has cited Pope Francis on social media. He even took a break from his 2016 campaign to visit the Vatican for a conference about the economy. In this new survey, about one-third of Americans said they view Mr. Sanders as “very” (4 percent) or “somewhat” (30 percent) religious.

Pope Francis said one of the world's most serious evils is the loneliness of the old. I couldn’t agree more.

We cannot turn our backs on the elderly. Let's make sure our seniors have the warmth, companionship, social interaction, and care they deserve. https://t.co/J47M4V7DC5

The only Democratic candidate whom a majority of poll respondents viewed as very or somewhat religious is former Vice President Joe Biden, who appeared at public events on Ash Wednesday with ashes on his forehead. Mr. Biden has spoken frequently about his own Catholic faith, but 39 percent of Americans still described him as “not too” (28 percent) or “not at all” (11 percent) religious. Mr. Biden would be the nation’s second Catholic president.

Earlier this week, Mr. Biden spoke about the role his faith played in helping him overcome the deaths of his first wife and daughter in 1972 and then the death of his son in 2015. In South Carolina, Mr. Biden was asked by the Rev. Anthony Thompson, whose wife was killed in an attack by a white supremacist at the Emanuel African Methodist Episcopal Church, how his faith helped him overcome tragedy.

“I’m not trying to proselytize, I’m not trying to convince you to share my religious views,” Mr. Biden said, addressing the audience during a CNN Town Hall. “But for me [faith is] important because it gives me some reason to have hope and purpose.” He also praised the family members of those killed in the church shooting for practicing the “ultimate act of Christian charity” in forgiving the shooter.

My faith is important to me because it gives me some reason to have hope and purpose. It took a long time for me to realize, but that purpose is the thing that has saved me. pic.twitter.com/b44oTZWgUJ

Pete Buttigieg talks about his faith on the campaign trail perhaps more than any other Democratic candidate, but the former mayor of South Bend, Ind., was viewed as very or somewhat religious by the fewest number of respondents to the poll. Just 32 percent said they see Mr. Buttigieg, who was born Catholic but who is now an Episcopalian, as religious, compared with 25 percent of Americans who viewed him as “not too” religious and 13 percent who said he is “not at all religious.” But 30 percent of Americans said they had “never heard of” Mr. Buttigieg or had no answer.

God does not belong to a political party.

The report did not ask how Mr. Buttigieg’s sexual orientation (he is gay) played into how Americans perceive his religiosity. But Mr. Trump has taken aim at Mr. Buttigieg’s faith, saying last month, “all of a sudden he’s become extremely religious, this happened about two weeks ago.” Though the president is embraced by large numbers of white evangelicals, Mr. Trump’s own faith has been difficult to pin down, as he does not frequently attend religious services, nor does he speak openly about his religious beliefs.

Rounding out the poll, Senator Elizabeth Warren of Massachusetts was viewed as very or somewhat religious by 36 percent of poll respondents. Though she has spoken about her days as a religious education teacher and tweeted as recently as this week about how the Gospel of Matthew shapes her worldview, Ms. Warren, a Methodist, was described by about half of Americans as not too or not at all religious.

It’s about how we treat other people and lift them up. That is why I am in this fight. #DemDebate

Ms. Warren said earlier this week that a Baptist minister from Boston, the Rev. Miniard Culpepper, prays over her before each debate, according to Religion News Service.

Both Ms. Warren and Mr. Buttigieg invoked Scripture during the Democratic debate in Charleston on Feb. 25. Responding to a question about what animates their views, Mr. Buttigieg cited the Golden Rule and a passage from the Gospel of Matthew, saying, “If you would be a leader, you must first be a servant.”

Ms. Warren also cited Matthew, as she has before, saying her life is driven by a selection of Matthew 25, which she quoted as, “Inasmuch as ye have done it unto one of the least of these my brethren, ye have done it unto me.” Her campaign tweeted that statement as well.

The only Democratic candidate whom a majority of poll respondents viewed as very or somewhat religious is former Vice President Joe Biden, who appeared at public events on Ash Wednesday with ashes on his forehead.

Mr. Biden, once the frontrunner for the Democratic nomination, struggled in contests in Iowa, New Hampshire and Nevada. He has said that those states lack large numbers of African-American voters, and he is pinning his hopes on a strong showing in South Carolina this weekend. The Pew report found that 72 percent of black Protestants described Mr. Biden as very or somewhat religious, as did majorities for Ms. Warren (53 percent) and Mr. Sanders (61 percent). But when it came to Mr. Buttigieg, who has struggled to attract support from African-American voters, just 39 percent described him as religious. One in three black Protestants said they never heard of or had no answer about Mr. Buttigieg.

@MikeOLoughlin
Provide feedback on this article
Join the conversation: Login or create an account
Before you can comment, you need to update your profile to include your first and last name, as required in our comments policy. Then reload this page and you'll be set up for commenting. Update your profile
Show Comments ()
Comments are automatically closed two weeks after an article's initial publication. See our comments policy for more.