Mourning in Charleston and Around the Nation 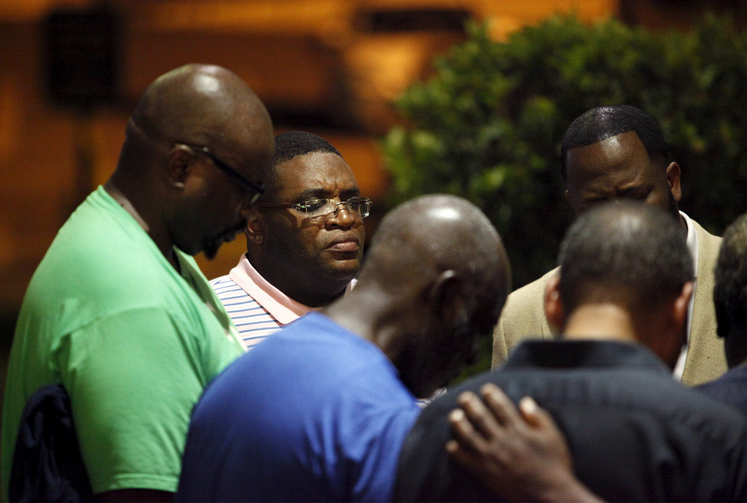 Expressions of regret and horror, prayer services and moments of silence across the country followed in the aftermath of a shooting in a historic Charleston, S.C., church. The rampage claimed the lives of nine people on June 17. Hundreds gathered around the Emanuel African Methodist Episcopal Church in a sorrowful prayer vigil. Once again the nation faced the grim, inexplicable spectacle of a mass slaying while a police dragnet began for the 21-year-old suspect Dylann Roof.

His motives for the attack on an evening Bible study group were unclear at press time, but acquaintances described Roof as troubled since childhood. The city’s police treated the attack as a hate crime. Roof's Facebook profile picture depicts him in a jacket stitched with the Apartheid-era South African flag above the flag of the unrecognized, white supremacist African state of Rhodesia.

The fact that the attack occurred in a church was bad enough; what has been worse is the clear implication that the rampage may have been racially motivated—more bad news in a nation already reeling from a number of controversies related to the questionable and at times homicidal use of force against African-American men and boys in recent encounters with police around the country.

When the suspect was eventually arrested 245 miles from Charleston in Shelby, North Carolina, the internet was already crackling with revelations of racist gestures and comments made by the suspect that seemed to indicate this senseless attack had been rooted in racial animus. According to survivor Sylvia Johnson, Roof told church members as he methodically gunned them down: “I have to do it. You rape our women, and you’re taking over our country.”

"A terrible human being who would go into a place of worship where people are praying and kill them is now in custody—where he will always remain," Charleston Mayor Joseph Riley told reporters as he tried to reassure his community.

For many, the massacre at a black church in Charleston is simply another mass shooting—just more evidence that the number of such attacks has been escalating in recent years even as efforts toward new gun control measures consistently fail to gather momentum in Washington.

But for African-Americans, church violence has historic dimensions that make this attack even more difficult to endure. The attack on the Emanuel African Methodist Episcopal Church, the oldest AME church in the South, reflects “a pattern of random, racialized violence against religious institutions,” said Valerie Cooper, associate professor of black church studies at Duke University.

“Persons burned churches because they thought the congregating of blacks together meant that that was a foment for some kind of revolutionary action,” said the Rev. Teresa Fry Brown, historiographer of the African Methodist Episcopal Church.

Robert E. Guglielmone of the Diocese of Charleston issued a statement the day after the handgun rampage. “I am deeply saddened,” he said. “The inside of any church is a sanctuary. When a person enters, he or she has the right to worship, pray and learn in a safe and secure environment. For anyone to murder nine individuals is upsetting, but to kill them inside of a church during a Bible study class is devastating to any faith community.

President Obama, commenting for, by some media counts, the 14th time on a shooting rampage during his presidency, said, "Michelle and I know several members of Emanuel AME Church. We knew their pastor, Reverend Clementa Pinckney, who, along with eight others, gathered in prayer and fellowship and was murdered last night.

"Any death of this sort is a tragedy. Any shooting involving multiple victims is a tragedy. There is something particularly heartbreaking about the death happening in a place in which we seek solace and we seek peace, in a place of worship.”

The president noted the historical significance of the church attacked yesterday. "Mother Emanuel is, in fact, more than a church," he said. "This is a place of worship that was founded by African Americans seeking liberty. This is a church that was burned to the ground because its worshipers worked to end slavery….This is a sacred place in the history of Charleston and in the history of America.”

The president can be forgiven if he feels overwhelmed by the number of such shootings. Their frequency and toll in dead and wounded are on the fact on the rise. The La Times reported today that researchers from Harvard's School of Public Health and Northeastern University, defining mass shootings as outbreaks of firearms violence in which four or more victims are killed and the shooter was unknown to most of his victims, found that in the roughly two-year period that ended in September 2013, a mass shooting occurred on average every 64 days.

In the preceding 29 years, such shootings occurred on average every 200 days. More than 310 million firearms are believed held by the public in the United States, perhaps double the per capita numbers in 1968. According to his uncle, the alleged shooter received the handgun he used to kill nine people at AME church from his father in April, as a birthday present.

"Now is the time for mourning and for healing, but let’s be clear," President Obama said, "at some point, we as a country will have to reckon with the fact that this type of mass violence does not happen in other advanced countries.

"It doesn’t happen in other places with this kind of frequency," the president said, adding, "And it is in our power to do something about it.”