Super Tuesday is a week away. Here are 6 takeaways from Bernie’s win in Nevada.

Super Tuesday is a week away. Here are 6 takeaways from Bernie’s win in Nevada. 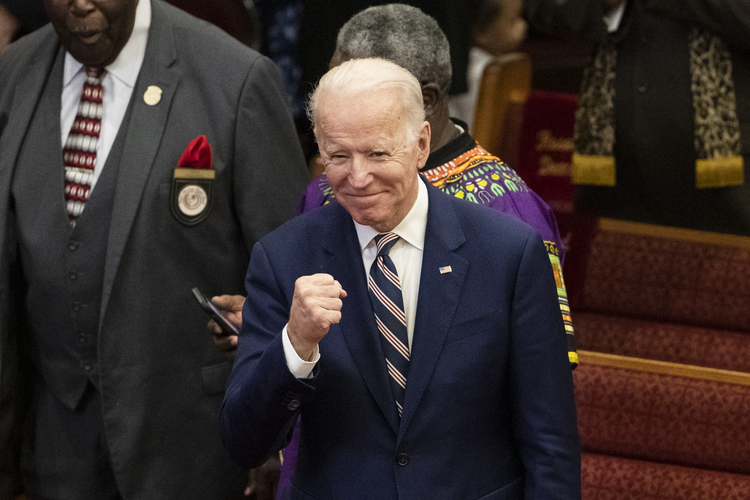 The Democratic presidential primary campaign is a week from its possible tipping point, and Bernie Sanders’s easy win in the Nevada caucuses on Feb. 22, powered by a 3-to-1 lead over Joe Biden among Hispanic voters, makes it even more likely that the Vermont senator will come out of Super Tuesday’s 16 contests with a clear lead in convention delegates. But will he come close to winning a majority of the popular vote that day? And will this Saturday’s South Carolina primary (the first of seven Democratic contests with mostly black voters) help determine who will be his main rival next week?

The larger questions: Is it even possible for the Democratic Party to find a unity candidate to field against Donald J. Trump? And is there any way for this fall’s election to point the way toward a new American political consensus?

Here are some of the takeaways from Nevada and Mr. Sanders’s new status as the clear front-runner.

A Sanders plurality spells trouble, and Milwaukee may run out of hotel rooms. The chances that no individual will win a majority of convention delegates by the end of the primary season is up to 41 percent as of Feb. 24, according to the website FiveThirtyEight. So a contested convention, a dream of political junkies for 50 years, may finally return to life this summer in Milwaukee. This alone is enough to guarantee worldwide media coverage, but the likelihood of some very nasty protests and screaming matches should attract thousands of journalists.

The Sanders campaign has been adamant: The candidate with the most delegates, even if far short of a majority, should get the nomination.

The Sanders campaign has been adamant: The candidate with the most delegates, even if far short of a majority, should get the nomination. But the apparent belief of Sanders supporters that it should be that easy to complete a hostile takeover of a major political party, without strong and sustained resistance from the party’s current leadership, shows some naïveté. As the journalist James Pogue wrote in The Baffler, “the confounding trap of liberal politics” is “the idea that it’s possible to empower the dispossessed without actively making enemies of the comfortable people who benefit from inequality and injustice.”

If, say, Mr. Sanders wins 40 percent of the delegates, Mr. Biden wins 35 percent and Mike Bloomberg wins 25 percent, how would the plurality principle be enforced? Would the Bloomberg delegates be compelled to switch to Mr. Sanders? Would they be locked out of the convention hall?

If it becomes the norm to give presidential nominations to candidates who win only a plurality of primary votes, will we see a rise in straw candidates designed to splinter the opposition? (Imagine Mr. Sanders encouraging people named “Mike Bloomberger” and “Joe Bidern” to run in the late primaries and confuse voters.)

Of course, a mere plurality of delegates should not clinch the nomination for Mr. Bloomberg either. But if Mr. Sanders and Mr. Bloomberg combined win a clear majority of delegates, does that mean there is a mandate for a nominee with weak party ties and a blunt personality—in other words, the exact opposite of the kind of party stalwart we might expect to come out of a brokered convention?

But Mr. Sanders may yet hit 50 percent. Mr. Sanders won 47 percent of county convention delegates in Nevada, but its caucus system does not necessarily tell us how the Super Tuesday primaries will go, especially in large states like California and Texas where voters are more likely to see campaign commercials than to interact directly with the candidates.

So does Mr. Sanders have an overall ceiling on potential support within the Democratic Party? Last week the data maven Nate Silver wrote, “I shudder to ask the question in part because of bad memories from four years ago, when theories about Donald Trump’s ceiling were a big reason that people like me initially dismissed his chances in the primaries.”

In fact, a YouGov poll released on Feb. 14 showed Mr. Sanders beating each of his Democratic rivals in a one-on-one race: by 21 points over Amy Klobuchar, 17 points over Pete Buttigieg, 15 points over Mr. Bloomberg, four points over Mr. Biden and two points over Elizabeth Warren. (Some caution here: This poll does not take into account direct attacks on Mr. Sanders that have not happened much in a multi-candidate race, as well as the increased name recognition that will go to whoever becomes his main opponent.)

If Mr. Sanders, or anyone, wins a big majority in the last primary in a purple state—on April 28, in Pennsylvania—the prospect of a contested convention may once again fade away.

So there can be a cascade of votes for a front-runner long after Super Tuesday, and if that person wins clear majorities in the final primaries, it would probably be fruitless to attempt to block him or her. (Mr. Trump won only 45 percent of the overall Republican primary vote in 2016, but he clinched the nomination by winning majorities in a late string of states, from New York on April 19 to Indiana on May 3.) If Mr. Sanders, or anyone, wins a big majority in the last primary in a purple state—on April 28, in Pennsylvania—the prospect of a contested convention may once again fade away.

There is also the possibility that Mr. Sanders will fall significantly short of a popular vote majority but still win a majority of delegates—if his opposition splinters so much that there are many congressional districts where he is the only one to get more than 15 percent of the vote and thus wins all the delegates from those districts. In that case, there would still be a good argument, on practical grounds and “common good” ethics, to find a compromise candidate, but the chances of denying Mr. Sanders the nomination would be nil.

General election polls are not helping to resolve things. Any reputable pollster will tell you that surveys pitting Mr. Trump against potential Democratic nominees are still not reliable. For one thing, they do not take into account the different kinds of attack ads (and disinformation campaigns) that can be launched in the final days of the general election campaign. For what it is worth, poll averages at RealClearPolitics had all of the Democrats beating Mr. Trump by two to five points as of Feb. 22. I am not providing more details because it is absurd to treat these margins as significant, even without taking into account the skewing of the Electoral College; you would think pundits would have learned their lesson after treating Hillary Clinton’s tiny poll leads over Mr. Trump as the last word in 2016.

Despite the lack of polling evidence so far, a lot of moderate Democrats are convinced that a Sanders nomination will cost their party dearly this fall.

Despite the lack of polling evidence so far, a lot of moderate Democrats are convinced that a Sanders nomination will cost their party dearly this fall. And as Alex Isenstadt reported in Politico last week,“Republicans up and down the ballot are already casting their Democratic rivals as socialist puppets who would remake the economy in Sanders’ collectivist vision. The play is straightforward: President Donald Trump has repelled college-educated suburban voters since he took office; Republicans want to win them back by arguing the alternative is worse.”

If Mr. Sanders does “repel” the college-educated suburbanites who have been moving toward the Democrats, he will have to win back some of those non-college-educated whites who voted for Mr. Trump in 2016. But there would be a clash between Sanders supporters on the coasts who would want him to focus on civil rights and racial equity issues, and Sanders supporters in the Rust Belt, who would want him to avoid social issues and stick to health care.

The union vote is not distinguishing itself so far. In the New Hampshire primary, Mr. Sanders got 30 percent of the vote in households with union members, according to exit polls, not significantly different from his overall winning percentage. In Nevada, polls showed Mr. Sanders with 34 percent, again not significantly different from his showing among non-union households. This was significant because the Culinary Workers Union, the largest labor group in Nevada, had criticized Mr. Sanders’s Medicare For All plan as a threat to health care benefits it had already won for its members.

What does Bernie Sanders’ win say about the future of capitalism?
Bill McGarvey

Indeed, the arguments within the Culinary Workers Union may have foreshadowed how voters will make their decisions in the later primaries and general election. In The New York Times, one member explained her decision to support Mr. Sanders and Medicare For All: “What we fought for, everybody should have. I don’t know why I would not want to give it to everybody.” But another member was not as sanguine about replacing her private health care plan with a government system. “We like to keep what we have, what is real, what is true,” she said. “Not what we don’t know what it will be—it’s like a wish.”

It’s a very different campaign when you only pay half attention to it. Did you think that former President Barack Obama had endorsed Mr. Bloomberg? You may have gotten this erroneous impression by seeing Mr. Bloomberg’s commercials at a bar or while folding laundry. One of the ads features an audio clip of Mr. Obama saying: “I want to thank the mayor of this great city, Mayor Bloomberg, for his extraordinary leadership. And I share your determination to bring this country together to finally make progress for the American people.”

“The power of saturation advertising. Someone at my gym in California asked me why Barack Obama chose Bloomberg over the rest of the field,” tweeted David Plouffe, Mr. Obama’s former campaign manager. In fact, Mr. Obama has so far stayed neutral, but Super Tuesday voters may end up voting under a different impression.

The candidate debates are not losing steam. Last Wednesday’s debate in Nevada got 20 million viewers, a record for a Democratic debate, according to The Hollywood Reporter, and this Tuesday’s match is sure to attract viewers wondering if Mr. Bloomberg can improve on his sour performance in Nevada—and whether Ms. Warren can possibly surprise viewers by being even more aggressive toward Mr. Bloomberg.

Show Comments ()
Comments are automatically closed two weeks after an article's initial publication. See our comments policy for more.
Show Comments ()
Join the conversation: Login or create an account
Before you can comment, you need to update your profile to include your first and last name, as required in our comments policy. Then reload this page and you'll be set up for commenting. Update your profile
Advertisement
More: US Politics / Election 2020