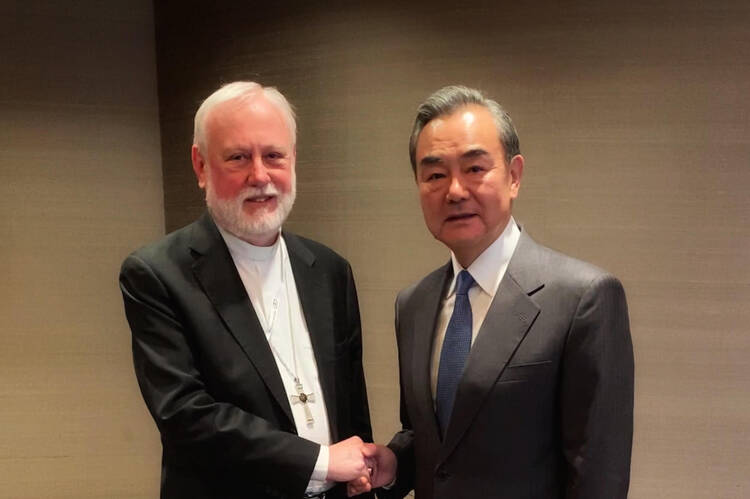 The foreign ministers of China and the Holy See have met for the first time in more than half a century. The Vatican announced this major and unexpected development between the two sides late in the evening on Feb. 14.

Archbishop Paul Gallagher, the Vatican’s secretary for Relations with States, and the foreign minister of the People’s Republic of China and counsellor of state, Wang Yi, met in Germany today. They were both attending the Munich Security Conference and convened outside the formal agenda to that annual event.

The meeting “renewed the will to pursue the institutional dialogue at a bilateral level to foster the life of the Catholic Church and the good of the Chinese people.”

The Vatican said in a statement sent to journalists late evening on Feb. 14 that the encounter took place in “a cordial climate” and “recalled the contacts between the two sides that had developed positively over time.” According to the statement, discussion at the bi-lateral meeting “highlighted the importance of the Provisional Agreement on the Nomination of Bishops signed on Sept. 22, 2018” and “renewed the will to pursue the institutional dialogue at a bilateral level to foster the life of the Catholic Church and the good of the Chinese people.”

Referring to the present coronavirus crisis, the Vatican statement said, “Appreciation was expressed for the efforts that are being made to [respond to] the coronavirus epidemic and for the solidarity towards the stricken population.” In recent weeks, the Vatican sent more than 600,000 masks to help protect people from the coronavirus in Wuhan and other communities in China hit by the virus in a clear sign of solidarity with the people there, an action that was appreciated by the Chinese authorities and reported in the Global Times in both Chinese and English.

Today’s statement concluded by expressing the mutual hope “for greater international cooperation so as to promote civil coexistence and peace in the world.” It also said the two sides “exchanged considerations on intercultural dialogue and human rights.”

On the flight back to the Vatican from Japan last November, Pope Francis said he loves China and would like to visit the country. Asked for his reaction to this, the Chinese Foreign Ministry spokesman, Geng Shuang, told reporters at a press conference in Beijing on Nov. 28, “We saw the reports and appreciate the pope’s friendliness and good will. China and the Vatican City State have good communication between us, and we are pleased with the improvement in our relations. China is sincere and active in advancing China-Vatican relations. We welcome and are open to exchange between the two countries.”

Today’s meeting would seem to be a verification of this.