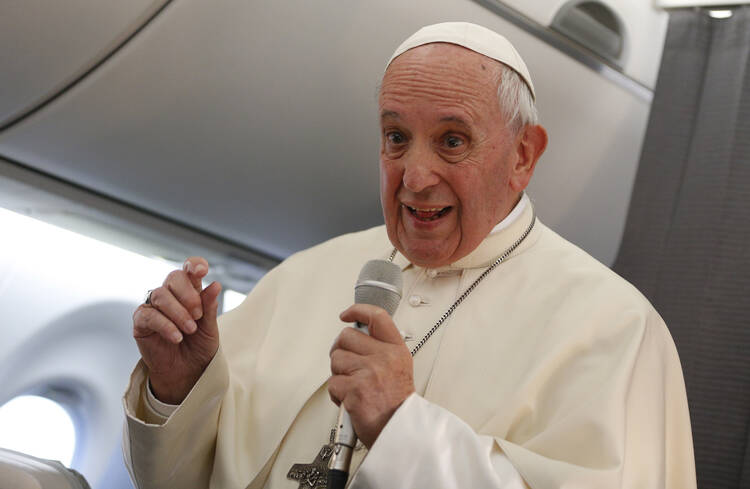 Rome nominates, the pope nominates. That is clear!”

Pope Francis has made his first comments on the provisional agreement that was signed last Saturday between the Holy See and China. He did so at a press conference on the flight from Tallinn to Rome, when he was asked to provide some information about the content of the provisional agreement. A reporter commented, “some Catholics, like Cardinal Zen, accuse you of having sold the church to the Chinese government.”

As part of his answer, Francis gave what he said was “a simple anecdote and a historic fact,” which referred to Archbishop Carlo Maria Viganò, though he never mentioned his name. “When there was that famous communiqué from an ex-apostolic nuncio many people across the world wrote to me, saying they were close to me. The Chinese faithful wrote and it was signed by a bishop of the traditional Catholic church and a bishop of the patriotic church, the two of them signed, these two signed and for me it was a sign from God.”

Pope Francis went into some detail how the provisional agreement was reached and what it meant. “There was a process [that went on] for years to regulate the nomination of bishops. [It was] a dialogue of a Vatican commission and a Chinese commission. The Vatican team worked a lot. I would like to give some names: Archbishop [Claudio Maria] Celli, [worked] with patience, he went on dialoguing for years; Monsignor [Gianfranco] Rota-Graziosi, a man of the [Roman] Curia, now 72 years of age, who wanted to go and work in a parish but remained to work on this. And then the Secretary of State, Cardinal [Pietro] Parolin, a very devout man, with a special devotion to detail…. And so we went on with this team and with these qualities.”

He then went on to refer to the bishops in China [there were eight but one of them died last year] that he had recently received into full communion with the church. “As for the bishops that were in difficulty, their cases were studied, and the dossiers of each one arrived on my desk, and I was the one responsible for the signing [the decree of reconciliation].”

Regarding the agreement, Francis said “the drafts came on my desk. I gave my ideas, there was discussion and they went forward.”

Next, the pope said,“I think of the resistance, of the Catholics who suffered. It’s true. And they will suffer. There is always suffering in an accord. But they have great faith. And they wrote, and they sent messages in which they said that ‘What the Holy See, what Peter says, Jesus says.’ We can say [that the faith of these people] was a martyred faith, and it goes on.”

Rome nominates, the pope nominates. That is clear!

Pope Francis concluded by saying, “Let us not forget that in Latin America for 350 years it was the kings of Spain and Portugal who nominated bishops, and the Pope approved the names…. Those times are past thank God, and may then not be repeated.”

With regard to the provisional agreement, Pope Francis said that “what is here is dialogue about the eventual candidates. This is done in dialogue. But Rome nominates, the pope nominates. That is clear!”

He ended by saying, “Let us pray for those who don’t understand, and for those who have behind them many years of clandestinity.”