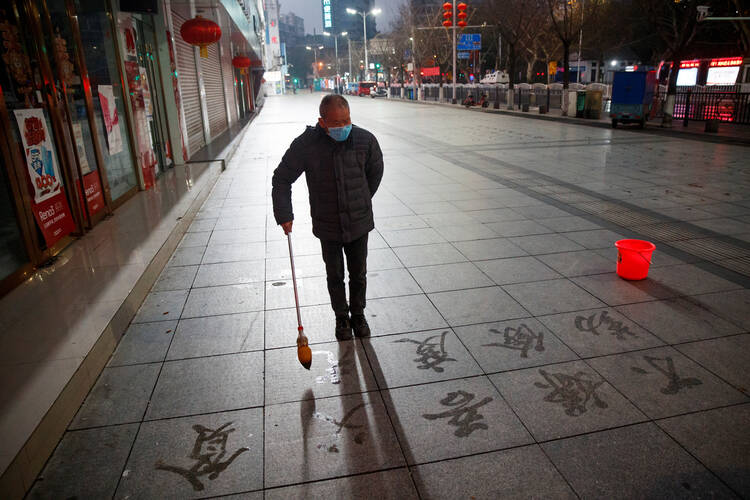 Responding to concerns expressed by Pope Francis about the spread of the coronavirus in China, the Holy See has donated 600,000 masks for distribution to people in the most affected areas.

The news was broken on Feb. 3, first by the Global Times, the daily newspaper published in Chinese and English under the direction of the People’s Daily, the daily of the Chinese Communist Party, and then by AsiaNews, the website of the Italian Catholic missionary order.

Later in the day, the Vatican press office confirmed the story and said, “Hundreds of thousands of masks have been sent from the Vatican to help limit the spread of the coronavirus.” It confirmed that they were sent to the provinces of Hubei, Zhejiang and Fujian, adding, “This was a joint initiative of the papal almoner and the Missionary Center of the Chinese Church in Italy, with the collaboration of the Vatican pharmacy.”

“I hope the supplies could reach where they are needed as soon as possible, so that people who are suffering the disease could feel the concern from the Holy See,” Father Han said.

On Sunday, Jan. 26, speaking after reciting the Angelus with pilgrims in St. Peter’s Square, Pope Francis expressed his concern about the coronavirus epidemic and prayed for its victims and their families. “I wish to be close to and pray for the people who are sick because of the virus that has spread through China. May the Lord welcome the dead into his peace, comfort families and sustain the great commitment by the Chinese community that has already been put in place to combat the epidemic,” he said.

The following day, Jan. 27, the papal almoner, Cardinal Konrad Krajewski, decided to take action after hearing a report on the situation from the Rev. Vincenzo Han Duo, the Chinese-born vice rector of the Pontifical Urbanium College in Rome. He contacted the Rev. Thomas Binish, the director of the Vatican Pharmacy, which set about the collection of masks throughout Italy—100,000 were collected on the first day alone.

“Shipping in Italy is usually slow, so the Vatican Pharmacy used its own vehicles to send the masks to Rome directly,” Father Han told the Global Times. The paper published photos of him pushing trolleys at the airport loaded with bags containing masks. The parcels of masks have the coat of arms of Pope Francis inside.

China Southern Airlines and other airlines, are transporting them for free to Wuhan in Hubei province, the epicenter of the epidemic, and in East China’s provinces of Zhejiang and Fujian. Three batches have already been sent to China, the third one was sent on Feb. 2, and the fourth is scheduled to depart in the next few days.

“I hope the supplies could reach where they are needed as soon as possible, so that people who are suffering the disease could feel the concern from the Holy See,” Father Han told the Global Times. “The whole world is standing together to fight the virus.”

The Global Times recalled that in September 2018 the Holy See and China had “signed a landmark deal on the appointment of bishops, a thorny issue that caused decades of tension between the two sides.” It said, “With the improvement in China-Vatican relations, the two sides have been engaged in activities to help get to know and understand each other and to find more common ground for their shared missions, such as fighting organ trafficking and promoting ecological protection.”

As news of the airlift of the masks broke, America learned that a notice from the Beijing diocese has reported that Joseph Zhu Baoyu, the elderly bishop emeritus of Nanyang, got the infection from one of his priests.