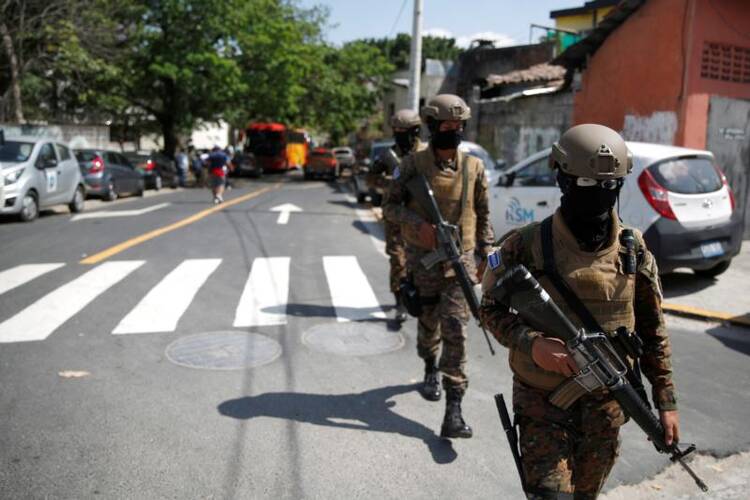 Soldiers patrol the surroundings of El Salvador's national congress as supporters of President Nayib Bukele protest outside the building to push for the approval of funds for a government security plan Feb. 9, 2020. (CNS photo/Jose Cabezas, Reuters)

MEXICO CITY (CNS) -- A Salvador cardinal urged "prudence" from the politicians in the Central American country as the president pushed congress to approve a package of security spending.

Salvadoran President Nayib Bukele wants lawmakers to approve a $109 million loan for security spending, which he says will allow the country to better confront powerful gangs. Some lawmakers refused to convene a special session, saying they want more details on his spending plans.

Over the weekend of Feb. 8-9, the government ordered military and police to surround the legislative building, and on Feb. 9, the military forced its way into congressional chambers in a show of force.

"We must ask for patience to avoid this situation getting out of control," Cardinal Gregorio Rosa Chavez said in a statement to the Rome-based Fides news agency.

"There is tension on both sides, and this can lead to confrontation. We must prevent that from happening for the good of the people. We must work together to solve our problems, instead of entering into this kind of heated confrontation."

Bukele, 38, swept into office in 2019, leveraging a slick social media campaign, along with anger at the two parties governing the country since the end of its civil war in 1992.

Can El Salvador face its future without confronting its past?
Melissa Vida

He has an approval rating of 7.8 out of 10, according to the Jesuit-run Central American University.

Observers expressed concern over the president using his personal popularity to strong-arm congress.

"He seems to believe that he can operate outside the rules of the democratic game because of his high approval rating among Salvadorans, the discrediting of the country's two main political parties in the 2019 election" and the United States and Organization of American States' "weakened commitment to democracy in the region," said Mike Allison, an expert on Central American politics at Jesuit-run University of Scranton, Pennsylvania.

"I don't approve of the presence of (the armed forces) in the (congress,)" tweeted U.S Ambassador to El Salvador Ronald Johnson. "Now I recognize the calls for patience and prudence. I join all actors asking for peaceful dialogue to move forward."

Bukele has pushed an agenda of increased security since taking office in June 2019 and says it's already driven down the homicide rate. He took to Twitter Feb. 10 to boast El Salvador did not experience a single homicide the previous day and claimed his "territorial control plan" worked "in spite of the obstacles."

Rick Jones, Catholic Relief Services adviser on migration matters in San Salvador, said the president's strategy of targeting gangs and beefing up security is not without precedent.

What has changed with Bukele, according to Jones, is a focus on communications, with the president effectively using social media and spreading messages to his 1.2 million Twitter followers in a country of just 6.45 million people.

"They have one of the most sophisticated social media platforms that anyone in Latin America has," Jones said.

"He's an expert in communications," he said. "His discourse is on anti-corruption and taming the violence, which are two of the things people want to hear about."