Can El Salvador face its future without confronting its past? 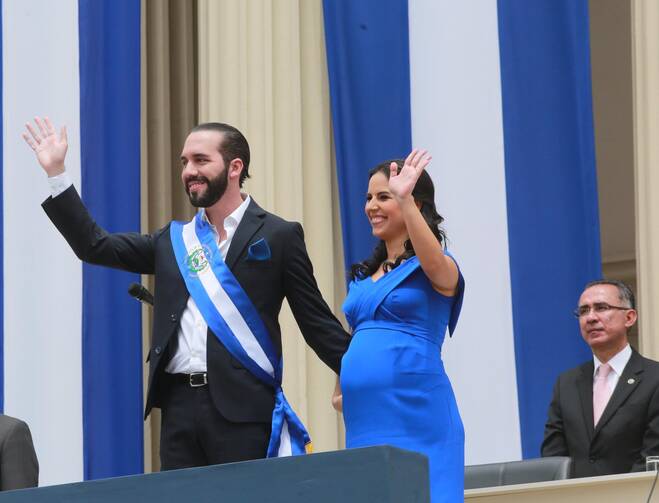 On June 1, Nayib Bukele, a young and social-media-savvy business entrepreneur, was sworn in as president of El Salvador. Mr. Bukele’s election marked a significant turn in El Salvador’s postwar era, putting an end to three decades of bipartisan rule. Since 1989 political leadership has been shared by the right-wing Nationalist Republican Alliance (Arena) and the left-wing Farabundo Martí National Liberation Front (F.M.L.N.).

While Mr. Bukele wants to direct his administration toward the future of El Salvador, the archbishop of San Salvador, the Most Rev. José Luis Escobar Alas, and Catholic and human rights groups remain concerned about historical memory and want justice for war crimes to be addressed in a country that in many ways is still divided by its civil war.

Salvadorans have high hopes for Mr. Bukele’s leadership. El Salvador suffers one of the world’s highest murder rates, and a third of its population lives below the poverty line—part of the reason thousands of Salvadorans seek asylum in the United States each year.

Almost 75 percent of the Salvadoran people believe that the new administration is “very capable, or somewhat capable” of improving El Salvador’s security, according to a recent poll conducted by the Jesuit-run José Simeón Cañas Central American University. At his inauguration, young people, farmers, war veterans and former members of F.M.L.N. guerrilla forces pledged allegiance to the new president.

El Salvador suffers one of the world’s highest murder rates, and a third of its population lives below the poverty line—part of the reason thousands of Salvadorans seek asylum in the United States each year.

Mr. Bukele, though considered politically conservative, had been a member of the F.M.L.N. before being expelled from the party in 2017. After his popular movement “Nuevas Ideas” was barred from fielding a candidate, he joined the Grand Alliance for National Unity party to mount his presidential campaign, beating challengers from the nation’s two dominant parties in February.

During his inauguration speech, Mr. Bukele said, “We only have five years, and they’re not going to be about turning the page of the war nor to get over [the two-party political monopoly] because [through the election] we already did these things.”

But Archbishop Escobar, who had given a speech to bless the president moments before, was not so eager to forget the past. Harkening back to the Spanish conquest in 1554, he traced centuries that had been marked with “ethnocide,” “land dispossessions” and “violent fratricides that continue until today.” Throughout this time, the archbishop said, the Salvadoran people never lost faith. He noted those who died for human rights in El Salvador, like St. Óscar Romero and other martyrs.

Then Archbishop Escobar prayed that Salvadorans “could overcome the very serious scourge of fratricidal violence that is literally annihilating us little by little.

“May we eradicate social violence in all its forms,” he said, “overcoming its causes: the great inequity that exists, social inclusion, impunity.”

Twelve years of civil war ravaged the country between 1980 and 1992. During the armed conflict, 80,000 people were killed, a majority of them civilians, and the bodies of 30,000 people have never been found, according to local press. Despite that carnage only a handful of cases for war crimes have been brought to justice since El Salvador’s Supreme Court in 2016 canceled an amnesty law that made it impossible to investigate crimes committed during the civil war.

The investigation of St. Oscar Romero’s assassination; a trial for the killing of six Jesuits, their cook and her daughter; and the trial for the massacre at El Mozote, in which the Salvadoran State recognized more than a thousand of adults and children victims, are among the rare emblematic cases that have been reopened before the court because of that decision.

Now El Salvador’s legislative assembly is debating whether to pass a “Special Law on Transitional and Restorative Justice for National Reconciliation.” It has been deplored by the new president, the Salvadoran media and human rights organizations as yet another amnesty law. Details of the legislation were kept secret and only revealed after a leak to the press. The proposals would stymie new war crimes investigations and essentially let those sentenced for war crimes off the hook. Instead of serving out their convictions in prison, their sentences would be commuted to community service. The Inter-American Court of Human Rights pressured Salvadoran lawmakers to halt further progress on the legislation while it formulates recommendations.

Sofía Hernández is willing to forgive those convicted of war crimes, but she asks: “How are we going to forgive, if they have never asked for forgiveness?”

The law’s supporters are legislators from the two parties—the F.M.L.N. and Arena—that emerged out of the civil war and that still control the National Assembly. The leadership of these parties, which include two former presidents, also now face serious corruption charges.

“The [proposed] amnesty law is a slap in the face of the people,” Santos Henriquez, a former F.M.L.N. fighter, told America during the inauguration ceremony. “The two parties have married each other to protect themselves, and we are forgetting the 90,000 people who died during the war.” Mr. Henriquez believes that Mr. Bukele will be a different kind of political leader in El Salvador because “he does not come from the upper echelons of these parties.”

Mr. Bukele, the former mayor of San Salvador, gained support from human rights’ groups as he frequently tweeted against the preliminary amnesty draft law, charging that “amnesty laws go against the international legal order, against the dignity of the victims.”

Even though the new president opposes the amnesty Law, “lawmakers still represent a threat for us,” said Father Fredy Sandoval, a founding member of Concertación Romero, the human rights organization inspired by St. Óscar Romero. “The legislators want a law that turns a blind eye on the military and the rich involved in crimes against humanity,” he said.

“They should be punished by prison sentence, and [the government] should give appropriate reparations to the victims,” he added.

Earlier this year, Archbishop Escobar said that such a law would “re-victimize the victims.”

Concertación Romero, along with other human rights groups, have countered amnesty plans with their own draft law meant to deliver justice and reparations to the victims of the war and their families.

Sofía Hernández, a civil war survivor, has been outspoken against the so-called amnesty Law. Her daughter, husband, two brothers and nephew were killed or “disappeared” during the conflict. Although the prosecution of the crimes’ perpetrators is important for her, her priority is to receive help in finding the bodies of her loved ones.

She has been looking for nearly 40 years. “We don’t win anything with [the perpetrators] in prison,” she told America. She is willing to forgive those convicted of war crimes, but she asks: “How are we going to forgive, if they have never asked for forgiveness?”

She is among a collective of 2,000 mothers who are pressuring the Salvadoran armed forces to open its archives to shed light on where people are buried and also pressuring the government to provide survivors with psychological and medical care. Mrs. Hernández said she still wakes up crying at night; her knees have been permanently damaged because of the torture she endured at the hands of death squads during the civil war.

"Bukele said during his campaign that the postwar era has passed,” Father Sandoval said. But for him that era cannot pass until El Salvador faces up to the consequences of that time—to provide reparations to the war’s victims and to fight impunity for war crimes. “We cannot talk about a pacification, reconciliation and rule of law if there is no justice,” he said. For Mrs. Hernández, restorative justice is a necessary step to rebuild the country.

A few hours after Mr. Bukele was sworn in as president, he sent a positive signal to human rights groups, ordering via Twitter that the Salvadoran military remove the name of Domingo Monterrosa from a military barracks. Mr. Monterrosa had been the commander allegedly responsible for the El Mozote massacre. Two days later, Mr. Bukele ordered that Jorge Antonio Meléndez, the director general of the Civil Protection Agency, be fired for his alleged role in the assassination of the revolutionary poet Roque Dalton.

Father Sandoval and Mrs. Hernández see these moves as steps in the right direction in supporting efforts to heal El Salvador’s historical memory. They hope to meet the new president themselves. They want to keep the victims of war high on the agenda of a government that hopes to move El Salvador past the war. “For him, maybe it’s over, but not for us,” Mrs. Hernández said. “The victims of the war will always keep on fighting.”

Melissa Vida is America’s Brussels correspondent. She is currently reporting from Central America.