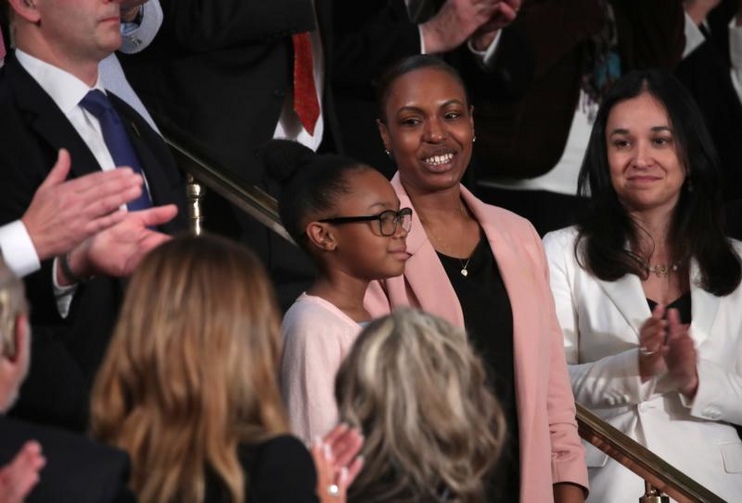 Janiyah Davis, a fourth grade student from Philadelphia, and her mother, Stephanie, smile after being recognized by U.S. President Donald Trump during his State of the Union address Feb. 4, 2020, at the Capitol in Washington. Trump spoke directly to Janiyah Davis while discussing his plans for school choice and federal tax credits.(CNS photo/Tom Brenner, Reuters)

WASHINGTON (CNS) -- The right of parents "to exercise freedom of choice in education is firmly rooted in the teachings of our Catholic faith," two U.S. Catholic bishops said Feb. 5 in a joint statement on a federal proposal to expand parental choice for their children's schooling.

Bishop Michael C. Barber of Oakland, California, who is chairman of the Committee on Catholic Education for the U.S. Conference of Catholic Bishops, and Auxiliary Bishop Michael J. Fitzgerald of Philadelphia made the remarks about Education Freedom Scholarships, a bill proposed by Sen. Ted Cruz, R-Texas, and supported by the Trump administration.

Pence and DeVos highlighted the success of parental choice programs across Pennsylvania and talked about Education Freedom Scholarships, which would authorize a federal tax credit for individuals and companies that donate to school scholarship funds or help parents who home-school their children.

"We applaud the goals of Education Freedom Scholarships and hope to one day see the opportunity for all families to have the freedom to select a school according to their conscience," the bishops said.

The era of the parochial school is over. Meet the Catholic educators searching for what’s next.
Betsy Shirley

They quoted from a 2005 USCCB statement that reaffirmed the bishops' commitment to Catholic education in the U.S.: "Advocacy is not just the responsibility of parents and teachers, but of all members of the Catholic community. As the primary educators of their children, parents have the right to choose the school best suited for their children. The entire Catholic community should be encouraged to advocate for parental school choice and personal and corporate tax credits, which will help parents to fulfill their responsibility in educating their children."

Pennsylvania offers two scholarship tax credit programs for low-income families to gain access to the school that best fits their child's educational needs. The first program was enacted nearly 20 years ago, in 2001, and today there are currently hundreds of scholarship organizations in the state whose donors receive a state tax credit of up to 90% percent of their donation.

In Philadelphia, Business Leadership Organized for Catholic Schools, known as BLOCS, is the state's largest scholarship program raising over $25 million last year and offering over 16,000 scholarships to low-income families. In the 2017-2018 school year, over 50,000 children received scholarships across Pennsylvania.

During the visit to Philadelphia, Pence discussed expanding this successful state model to the federal level with the Education Freedom Scholarships proposal. The proposal would provide for a $5 billion annual federal tax credit for voluntary donations to state-based scholarship programs.

In his State of the Union address Feb. 4, President Donald Trump gave a shoutout to school choice by pointing out two of his guests in the House chamber -- Janiyah Davis, a fourth grade student from Philadelphia, and her mother, Stephanie.

Trump announced Janiyah would be getting a scholarship to attend the school of her choice and he urged support for the federal legislation on school choice. He criticized Pennsylvania Gov. Tom Wolf for vetoing a measure last year that would have expanded a private school choice program in that state.