The Editors: Impeachment failed, but the separation of powers is still worth fighting for

The Editors: Impeachment failed, but the separation of powers is still worth fighting for 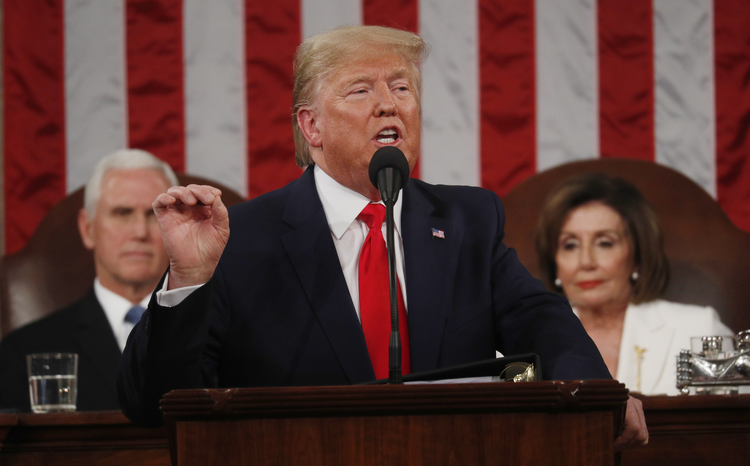 U.S. President Donald Trump delivers his State of the Union address Feb. 4, 2020, at the Capitol in Washington. (CNS photo/Leah Mills, pool via Reuters)

The framers of the Constitution expected that the United States would have leaders who might not always place the national interest above their own. They planned to counteract “ambition,” as they named the self-interested drive to accumulate power, with ambition itself. In the Federalist Papers (No. 51), James Madison wrote that in order to avoid the concentration of power in a single branch of the government, “The interest of the man must be connected with the constitutional rights of the place.”

Madison described the design of separation of powers as “supplying, by opposite and rival interests, the defect of better motives.” In other words, the republic’s integrity depended upon elected officials being more interested in protecting the power of their branch of government than in protecting their partisan allies in other branches.

In the impeachment and trial of President Donald Trump, this design has failed. Institutional self-interest was insufficient to overcome partisan self-interest. A check on power that depended on rivalry between the legislature and the executive became merely a predictable contest of party loyalty between Democrats and Republicans.

A check on power that depended on rivalry between the legislature and the executive became merely a predictable contest of party loyalty between Democrats and Republicans.

The reality of partisan division should not, of course, determine the outcome of the impeachment process in either direction. In this case, the Republican-led Senate’s refusal to push any further into establishing the facts of Mr. Trump’s conduct and motives than the Democratic-led House investigation did, or could, leaves the substantive questions underlying impeachment in a state of suspended animation.While Mr. Trump has been acquitted, he has not been convincingly exonerated. Nor have Americans been thoroughly convinced—as some Republican senators, accepting that the House managers proved the basic facts, have argued—that Mr. Trump’s conduct, while wrong, did not rise to the level of “high crimes and misdemeanors.”

Another interpretation of impeachment is that it functions as a sort of “super-censure,” the most powerful possible sanction the House of Representatives can deliver. Speaker Nancy Pelosi, responding to Mr. Trump’s acquittal, reiterated that he “has been impeached forever.” Arguably, the impeachment and acquittal of President Clinton served such a purpose, marking his lying under oath as clearly wrong but not necessitating his removal from office. Yet Mr. Trump, despite members of his own party acknowledging that his actions crossed a line, has continued to assert, including in his speech following acquittal, that he did nothing wrong. He has maintained throughout that he was and remains justified in applying the pressure for investigations that led to his impeachment.

He has maintained throughout that he was and remains justified in applying the pressure for investigations that led to his impeachment.

A Senate trial could still have served its necessary constitutional purpose while concluding in acquittal, but a trial determined in advance by partisan division fails to act as even a soft brake on presidential overreach. If the Senate is unwilling to assert its right to require documents, witnesses or answers from the president, expressions of discomfort with the president’s actions are not a sufficient replacement.

While the first article of impeachment, accusing Mr. Trump of abuse of power in relation to Ukraine, received most of the attention in the trial, it is the second article, accusing him of obstruction of Congress, that presents the most serious ongoing challenge to the American system of checks and balances.

If Mr. Trump does continue to use foreign policy to seek advantage in domestic political contests, it is at least possible that sunlight can serve as a disinfectant and that the combined threat of media scrutiny and House investigations can check his worst impulses in this regard. A debt of thanks is owed to the foreign service professionals and other officials whose testimony in the House investigation informed the country about these risks. Yet even if a repetition of the Ukraine affair is avoided, Mr. Trump’s manifest disdain for the concept of separation of powers still requires attention.

Mr. Trump refused to cooperate with the House impeachment inquiry and instructed administration officials that they enjoyed “absolute immunity” from congressional subpoenas. He has described the impeachment proceedings as a sham, a witch hunt and “constitutionally invalid.” He does not limit his assertions of power to refusal to be investigated; he has said that Article II of the Constitution gives him “the right to do whatever [he wants] as president.” While it is difficult for any particular outrageous statement from Mr. Trump to surface above the rest, this one captures precisely what is so troubling about his presidency: He focuses on what justifies his actions and seems uninterested in understanding or abiding by any limits on his power.

Mr. Trump refused to cooperate with the House impeachment inquiry and instructed administration officials that they enjoyed “absolute immunity” from congressional subpoenas.

Because Republicans command a majority in the Senate and party allegiance to Mr. Trump is nearly monolithic, Mr. Trump’s grandiose visions of presidential authority have gone unchecked by this impeachment process. A trial more focused on the obstruction of Congress charge—which would have required different strategic decisions in the House about how to conduct its investigation and present its case in the Senate—might have done something to redress the balance of power between the executive and the legislature. That opportunity, sadly, has been lost.

Though he is particularly brazen about it, Mr. Trump is far from the first president to push for troubling expansions of executive power, and this is far from the first Congress to fail to curb that expansion. That trend was well established through the 20th century, and America’s editors criticized both Presidents George W. Bush and Barack Obama for furthering it. While Mr. Trump is the current manifestation of this problem, that is no guarantee that a different president from a different party would attend to constitutional limits more responsibly.

The American political experiment seeks the common good not only by hoping for leaders who will prioritize it, but also through a system of checks and balances to restrain and correct those leaders when they choose self-interest instead. As voters, the American people must seek the common good not only by determining which politicians to support, but also by calling them to commit themselves more vigorously to the stewardship of the republic than to partisan purity.

This article also appeared in print, under the headline “A Republic, if We Can Keep It,” in the March 2, 2020, issue.