The Editors on the Question of Impeachment 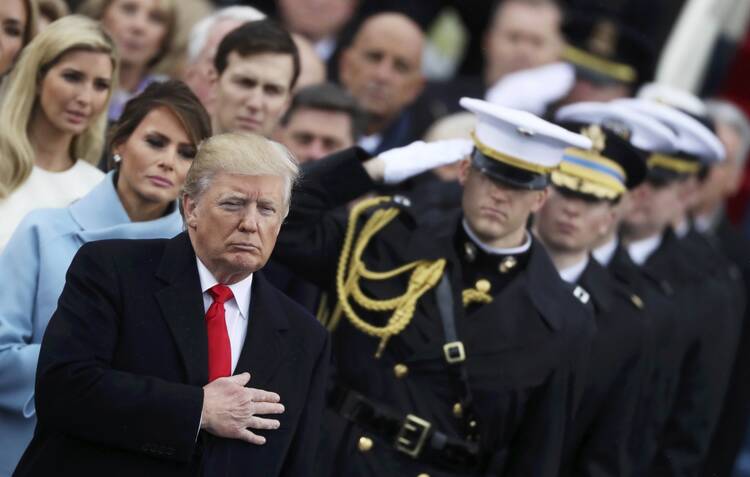 President Donald Trump listens to the national anthem after his Jan. 20, 2017 swearing-in as the country's 45th president at the U.S. Capitol in Washington. (CNS photo/Carlos Barria, Reuters)

For only the third time in the history of the republic, the U.S. House of Representatives will vote this week on articles of impeachment against a president of the United States. Every responsible citizen will see this event for the tragedy it is—a grievous wound to the body politic of a nation already torn asunder by the forces of polarization. Our civic duty requires us to rise above partisan and sectional interests and to act to preserve the constitutional order.

The articles of impeachment that the House will consider state that President Trump “ignored and injured the interests of the nation.” The first article charges the president with using “the powers of his high office” to solicit “the interference of a foreign government, Ukraine, in the 2020 United States presidential election.”

Our civic duty requires us to rise above partisan and sectional interests and to act to preserve the constitutional order.

The U.S. Constitution states that the president “shall be removed from office on impeachment for, and conviction of, treason, bribery or other high crimes and misdemeanors.” Since the Constitution does not define all of those terms, people of good will can and do disagree about whether the president’s actions with respect to Ukraine and the subsequent congressional investigation constitute impeachable offenses.

Yet it is clear from the evidence produced thus far that the president’s conduct belongs to a sphere of activity that was a matter of great concern to the framers of the Constitution and, at a minimum, represents a grave constitutional hazard. “The desire [of] foreign powers to gain an improper ascendant in our counsels,” Alexander Hamilton wrote in the Federalist Papers, is “one of the most deadly adversaries of republican government.”

There are few, if any, historical examples of a U.S. president asking a foreign head of state to launch a criminal probe into the associates of a domestic political rival.

The evidence indicates that the now-famous phone call between President Trump and Ukrainian President Zelensky on July 25, 2019, not to mention its associated activities, cannot be characterized in any objective sense as “perfect,” as the president has described it, nor can it be described as historically typical. There are few, if any, historical examples of a U.S. president asking a foreign head of state to launch a criminal probe into the associates of a domestic political rival.

It is also highly unusual for a president to refuse to cooperate entirely with the legitimate and lawful actions of Congress in the exercise of its constitutional prerogatives, however odious or partisan in intent the president may judge their decisions to be.

In evaluating the evidence, it is important to bear in mind the framework for impeachment and trial established by the Constitution. In 1974, the editors of this review, in an editorial that assessed the case against then-President Richard M. Nixon, described this framework:

The function of the House is to accuse or not to accuse. The function of the Senate is to acquit or convict. Clearly, the two functions are not the same and should not be governed by the same rules. The members of the House do not have to ask themselves whether there is sufficient evidence to convict. What they do have to ask themselves is whether there is sufficient evidence to justify, or even require, accusation.

The function of the accusation is to compel the President to defend himself. The question, then, before the House is whether the evidence presently available with respect to [the President] demands further explanation and defense of his activities.

In applying that standard to the present case, it is clear that the evidence, including the meager evidence provided by President Trump himself, demands further explanation and defense, which can be fully realized only through the formal proceedings of a trial by the U.S. Senate. The president’s apparent conduct raises grave constitutional questions, and the evidence suggests a pattern of wrongdoing that, at a minimum, raises the question of whether the president abused the power of his office.

Common objections to this course of action include the following:

The first objection is that the impeachment process has been driven purely by partisan motivations, that Democratic members of Congress have wanted to impeach the president since the day he took office. In a nation beset by partisan conflict, there is an obvious element of truth in that claim.

The only ultimate question is whether the full set of facts reveals a pattern of behavior that warrants the conviction and removal of the president.

That claim, however, is a fallacious argument that has no dispositive bearing on the facts. As a matter of logic, the fact that some Democrats have long suspected Mr. Trump of abusing the power of his office neither guarantees nor eliminates the possibility that he has done so. In the event of a trial, senators should stick to the facts and avoid accusing each other of bad motives, a tactic that characterized the proceedings in the House. The only ultimate question is whether the full set of facts reveals a pattern of behavior that warrants the conviction and removal of the president.

The second objection to impeachment relies on the conventional wisdom that in a time of polarization we cannot expect two-thirds of the U.S. Senate, including 20 Republican senators, to vote to convict the president—the supermajority required by the Constitution. For this reason, many have argued that we should abandon the impeachment process and allow the 2020 presidential election to settle the question of Mr. Trump’s incumbency.

Yet such a course would absolve senators of their constitutional duty to rise above their partisan interests and to act as fair and impartial jurors. If the U.S. Senate is unable to act as an impartial jury, moreover, then the most important constitutional checks on the power of the chief executive, impeachment and removal, are meaningless.

As we stated at the outset, these events are testing the constitutional order, not only the future of the presidency of Donald J. Trump. Is the system of checks and balances established by our founders still viable? In the constitutional republic they envisioned, citizens should expect the U.S. Senate to consider the matter in an evenhanded manner, each senator arriving at an independent judgment after considering the national interest and after consulting his or her conscience. Citizens should expect that some Democratic senators, acting in good conscience, would consider acquittal, and that some Republican senators, similarly acting in good conscience, would consider conviction.

The Editors: The impeachment process shows why we need to clarify executive privilege
The Editors

From 1974: Why the President should be impeached
The Editors

Indeed, prescinding from the actual outcome of the trial, if the U.S. Senate is able to produce a few examples of such profiles in courage, then it will have done much to restore the faith of the American people in the ability of their elected officials to act in conscience for a greater good. We should give the Senate the opportunity to do so.

Whatever the outcome, no party or politician will be able to claim absolute victory or vindication. The founders gave us the power to remove a president through impeachment and conviction, but they viewed this process as a last resort, as a course to be pursued when all else failed to provide the check on executive power that the constitution requires.

All else has failed. Yet the nation, through its representatives in the U.S. Senate, will soon have an opportunity to demonstrate to the world that the Constitution has not failed; that our founding charter is still the guiding light of our country; and that we the people still possess the courage to meet the high standards it sets for every citizen.