Pope Francis: A vibrant economy must put an end to poverty 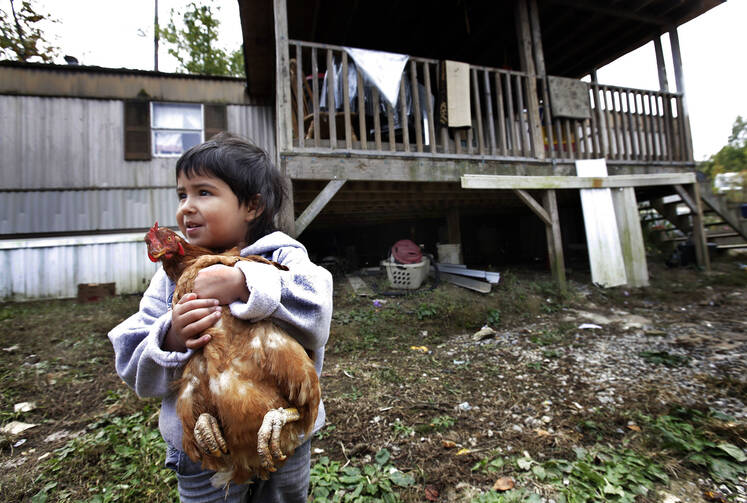 A boy holds a family chicken outside his home in Steele, Ala., in this 2013 file photo. (CNS photo/Karen Callaway, Catholic New World)

Pope Francis called for a radical change, “a new ethic,” in the organization and management of the world’s economy and finances when he addressed a high-level conference in the Vatican attended by the managing director of the International Monetary Fund, the president of the World Bank, heads of multilateral institutions, government ministers and well-known economists, including many from Latin America.

He encouraged them to build bridges that foster the development of a vision of solidarity in the financial world, among governments and in economic decisions. The one-day conference was held at the Pontifical Academy of Social Sciences and brought together economists and government officials from North and South America, Europe and Africa.

“The world is rich but, notwithstanding this, the [number of] poor people around us is increasing,” he told the international gathering on Feb. 5. He said that per-capita income in the world today is around $12,000, but “hundreds of millions of people are living in extreme poverty, lacking the bare necessities of life including food, medical care, schools, drinking water.”

Five million minors “will die this year due to poverty,” Pope Francis said, and another 260 million are without education due to lack of resources, wars and migration, while millions more are victims of human trafficking or new forms of slavery, or subjected to prostitution or the sale of organs.

This situation is “a call for action, not a motive for despair,” he told them. “We are not condemned to universal inequality,” he said, suggesting “creative responses in the face of the...suffering of so many innocent people.”.

He identified the problem as “the lack of will and decision to change things, and especially [to change] the priorities.” But, he said, “a rich world and a vibrant economy can and must put an end to poverty.”

“The world is rich but, notwithstanding this, the [number of] poor people around us is increasing,” Pope Francis said. “Hundreds of millions of people are living in extreme poverty, lacking the bare necessities of life including food, medical care, schools, drinking water.”

Noting extreme poverty in the midst of sometimes extreme wealth, he said, “This is because we have permitted the gap to grow into the biggest in history.” He noted that the 50 richest people in the world could provide education and health care for every poor child in the world. “They could save millions of lives each year.”

But alongside “the globalization of indifference,” he said, there are what St. John Paul II called “the structures of sin,” which are visible whenever “the common good” is reduced to that of “certain sectors” or when the economy and finances “become an end in themselves.” He attributed these evils to “the idolatry of money, greed and speculation,” exacerbated by the speed of transactions as a result of modern technology.

Pope Francis said the social doctrine of the church teaches that forms of government and banks achieve their proper purpose in society when they work for “the common good, social justice, peace, and the integral development of each person, and of the human community.”

But “structures of sin,” built on corruption by some of the world’s largest companies often in collaboration with the government sector, facilitate tax evasion by the wealthy who use tax havens for private and corporate gain. He noted that every year “thousands of millions of dollars” that should be used as taxes that would finance medical care and education are deposited in these tax havens, preventing governments from providing proper development for their peoples.

This issue was also mentioned by a number of speakers at the conference, including Gustavo Beliz, minister for strategic operations in the new Argentine government, whom Pope Francis knows well, and Professor Joseph E. Stiglitz of Columbia University in New York.

He noted that every year “thousands of millions of dollars” that should be used as taxes that would finance medical care and education are deposited in these tax havens, preventing governments from providing proper development for their peoples.

Pope Francis highlighted the fact—which he knows well from his days in Buenos Aires—that people in “debt ridden countries” have to bear heavy taxes and cuts in social services so that their governments can pay the public debts that can be unsustainable. Such debts are often undertaken to advance economic development but can achieve the opposite and end up being a factor that damages a nation’s social fabric, the pope said.

Pope Francis recalled what John Paul II wrote in 1991 regarding the foreign debt of countries: “The principle that debts must be paid is certainly just. However, it is not right to demand or expect payment when the effect would be the imposition of political choices leading to hunger and despair for entire peoples. It cannot be expected that the debts which have been contracted should be paid at the price of unbearable sacrifices. In such cases it is necessary to find—as in fact is partly happening—ways to lighten, defer or even cancel the debt, compatible with the fundamental right of peoples to subsistence and progress.”

Francis recalled that governments at the United Nations had reached a somewhat similar agreement in their accord on Sustainable Development Goals in 2015, and several speakers at the conference had homed in on this same point, of countries being brought to their knees by the debt and the demands for payment.

Faced with such problems, Francis said, there was a need for new forms of solidarity from the financiers to enable the countries to develop without having to bear impossible burdens. He thanked the participants at the conference for their sensitivity to these issues and encouraged them to find new creative ways of “solidarity and inclusion” to help countries handle their debt and develop—ways that would also help bridge the gaps between them and richer, more economically developed countries.

The reference to the debt question was particularly significant as it signaled Pope Francis’ public support for the efforts of the new government in Argentina, his homeland, to renegotiate and restructure its enormous debt with the I.M.F. He had promised to help in whatever way he could when he met the new president of Argentina on Jan. 31.

The conference, organized by the Argentinian Archbishop Marcelo Sanchez Sarono, chancellor of the Pontifical Academy for Social Sciences, provided a crucial opportunity for the Argentine Minister of the Economy Martín Guzmán and the Minister for Strategic Affairs Gustavo Béliz to meet in private with the head of the I.M.F., Kristalina Georgieva, and the person responsible for the I.M.F.’s relations with the countries of the Southern Cone, Sergio Chodos.

They spent two and a half hours in private conversation over dinner at the Argentine Embassy to the Holy See last evening. This morning, both sides told reporters that it was a very constructive encounter.

In his talk to the conference, Francis declared that “a major structure of sin is the industry of war, which takes resources and time at the service of division and debt.”

Echoing what he said in Nagasaki, Japan, last fall, he recalled that the world “loses billions of dollars in arms and violence every year,” money that could be used to provide for medical care, education, welfare and the basic needs of people that are enshrined in the Universal Declaration of Human Rights.

He urged participants to use their good offices to inform and help governments to re-establish their priorities and combat the injustices in the world. He invited them to “work together to put an end to these injustices” and to promote “a new ethic.”

Francis joined all the participants for a group photo outside the Pontifical Academy for Social Sciences and greeted each of them. After he had departed, Ms. Georgieva, the first head of the I.M.F. from an emerging economy—Bulgaria—posted a tweet in which she expressed “my immense gratitude to @pontifex for joining our dialogue and for your inspiring words. We fully share your vision that the global economy needs to be more inclusive, more fraternal and should care about our common home, our planet.”