Monty Python and the 7 early takeaways from Iowa

Monty Python and the 7 early takeaways from Iowa 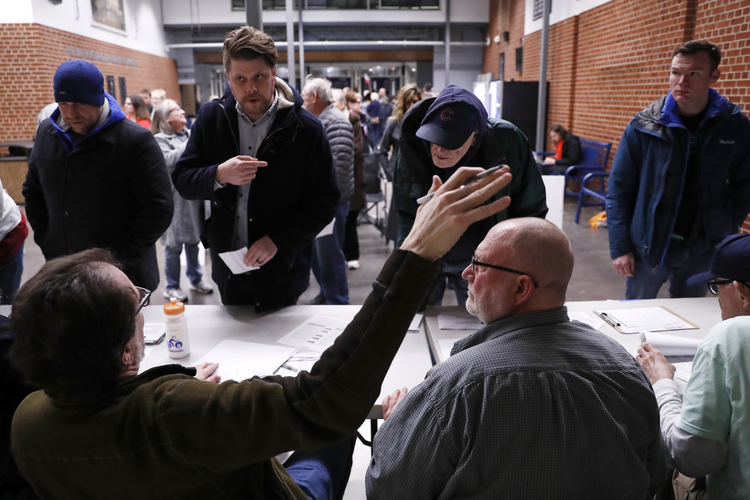 This article was updated as official county results from the Iowa caucuses became available. On Feb. 7, The New York Times was reporting that 99 percent of precincts had reported results, and Mr. Buttigieg was narrowly first in pledged delegates with 26.2 percent, followed by Mr. Sanders at 26.1 percent, Ms. Warren at 18.0 percent, Mr. Biden at 15.8 percent and Ms. Klobuchar at 12.3 percent. But Mr. Sanders had finished first in the first-round popular vote, with 24.8 percent to Mr. Buttigieg’s 21.3 percent, before the votes of candidates who did not make the 15 percent threshold at individual caucus sites were redistributed.

In a sketch from “Monty Python’s Flying Circus,” the late Terry Jones plays El Mystico, a magician hired to build public housing on the cheap by means of mass hypnosis. The only problem is that if the tenants stop believing in the building’s existence, it will collapse.

Last night the Iowa caucuses started to collapse. Reporters, political scientists and ordinary voters had long wondered why Iowa had taken on such importance, and this year candidates like Julián Castro complained that the state was too white and too rural to be given the task of culling the contingent of presidential hopefuls, but no one has been able to break its spell. This year’s fiasco, in which the Iowa Democratic Party still had not reported any official results by mid-afternoon of the next day, makes it more likely that the state’s almost-50-year run as the first major contest of the presidential year will end. But the 2020 caucuses still had an impact. Here are some of the main lessons of the debacle in Des Moines.

“Our elections are vulnerable to dangerous attacks on their legitimacy, especially when things go wrong like last night.”

1. It was a good night for authoritarianism. Democracy dies, not in darkness, but in a whirlwind of conspiracy theories and rumors meant to undermine confidence in the election process. President Trump promoted the idea of massive election fraud as an explanation for why he lost the popular vote in 2016, leading to fears that he will tell supporters not to accept the result if he loses re-election this fall.

This year, Iowa further encouraged paranoia, beginning with the Des Moines Register’s decision on Sunday not to release the results of its last poll before the caucuses. The newspaper said that its polling process was tainted (at least one surveyor apparently did not read all the candidates to at least one respondent), but that didn’t stop people from saying it was burying results it didn’t like.

On the night of the caucuses, efforts to delegitimize the results continued, with the conservative website Breitbart headlining a story “Non-Citizens, DACA Illegal Aliens Organize for Democrats in Iowa Caucus” (there is no citizen status requirement for working on a political campaign, and teenagers ineligible to vote also volunteer) and Sean Hannity sharing a story that some Iowa counties have more people registered to vote than they have voting-eligible citizens (an assertion quickly debunked by the state’s Republican secretary of state). Even more creative, some people on Twitter began sharing an NBC News announcement that Joe Biden was withdrawing from the race—a tweet actually from 2008, the last time he ran for president.

As the political scientist Brendan Nyhan tweeted, “Our elections are vulnerable to dangerous attacks on their legitimacy, especially when things go wrong like last night,” leading to “wildly irresponsible conspiracy theories from both the left and right.” There is no reason to conclude that the Iowa results, even if reported late, are wrong, but unexpected glitches feed the narrative that the democratic process is just too messy to trust—and that can lead to the rationalization of anti-democratic practices like making it more difficult for people to vote.

2. Turnout was surprisingly low, and that raises questions about Bernie Sanders. The Washington Post’s Karen Tumulty reports that participation in the Iowa caucuses was “mediocre”: “About 170,000 people participated... far short of the unprecedented 240,000 voters who turned out in 2008 and launched Barack Obama on his way to the White House.”

The unimpressive turnout does not help Mr. Sanders, many of whose supporters make the case that he can bring newer and younger voters to the polls.

Was it campaign fatigue, the complicated rules, indecision caused by too much responsibility or too much choice? The state’s low 2.7 percent unemployment rate? Was it “The Bachelor”? Whatever the reason, the unimpressive turnout does not help Mr. Sanders, many of whose supporters make the case that he can beat Mr. Trump by bringing newer and younger voters to the polls. There is an alternative case for Mr. Sanders’ electability: that he can “win back disaffected Obama supporters in the Rust Belt” who voted for Mr. Trump in 2016, as Megan Day and Matt Karp argue in Jacobin. But those are overwhelmingly white non-college-educated voters, and Keeanga-Yamahtta Taylor, in making the case for Mr. Sanders in The New York Times, complained of “the endless analyses of poor and working-class white voters shortly after Mr. Trump’s election and the few examinations of poor and working-class people of color.” Future primaries may provide some evidence of whether Mr. Sanders can combine the approaches of bringing out newer voters and converting older ones, and whether either strategy is truly viable.

3. The age gap explains everything. ButMr. Sanders’s appeal may be simpler than all that. According to entrance polls at the Iowa caucuses, Mr. Sanders won a commanding 41 percent among voters under 45, with support diminishing among older groups. And a Pew Research Center survey released last week found Mr. Sanders with 40 percent nationally among voters 18 to 29, and only 10 percent among voters over 65, with almost precisely the inverse pattern for Mr. Biden. (None of the other candidates showed such a wide range among age groups.) That age gap explains a lot of the other demographic results, as Mr. Sanders does better with groups that skew young (the religiously unaffiliated, Hispanic Catholics, voters with some college education) and worse among those that skew old (white Catholics, white evangelicals, postgraduate degree holders).

Younger voters may also be more prone to protest, which may be cause for worry among the organizers of the Democratic National Convention this summer in Milwaukee.

4. Catholic candidates no longer dominate the Catholic vote. Mr. Biden is the only Catholic remaining among the major Democratic candidates, and the Pew survey mentioned above estimated that his support among white Catholic Democrats was 37 percent, far ahead of Mr. Sanders’s 14 percent but far short of a majority. And Hispanic Catholics preferred Mr. Biden by only four points: 29 percent to 25 percent. (Mr. Biden led among all major religious groups except the unaffiliated, where he was third: 28 percent for Mr. Sanders, 21 percent for Elizabeth Warren, and 17 percent for Mr. Biden.)

In Iowa, there are two majority-Catholic counties, according to the 2010 U.S. Religion Census: Dubuque, which has 94,000 people and borders the Mississippi River; and Carroll, which has 21,000 people and is in the west central part of the state. According to Gregory Korte of Bloomberg News, “Dubuque...is the smallest city in the country to house an archdiocese. Its hills, many churches and two Catholic colleges, Clarke University and Loras College, have also given it the nickname the ‘Rome of America.’” Dubuque County voted for the Democratic nominee in every election from 1960 (when John F. Kennedy was on the ballot) through 2012, but Mr. Trump won it by 1.2 percentage points in 2016. This year, Mr. Buttigieg won 28 percent of the popular vote in Dubuque County, with Mr. Biden at 23 percent and Mr. Sanders at 22 percent. Mr. Buttigieg also won Carroll County, with 32 percent.

5. There are diminishing returns in trips to Iowa. John Delaney made the most visits (270) to Iowa between Dec. 8, 2016, and Feb. 3, 2020, according to the Des Moines Register Candidate Tracker, but he still dropped out of the race three days before the caucuses. Ms. Klobuchar was second, with 191 events over the same period. Mr. Castro made the most visits (34) to the state’s largest city, Des Moines, but he also dropped out before the caucuses.

6. We have not yet seen what Mike Bloomberg is capable of. Former New York City Mayor Mike Bloomberg never campaigned in Iowa, and he was responsible for a modest 10 percent of all spending for television commercials by Democrats (through Jan. 29). We won’t get a true test of his wealth until March 3, or Super Tuesday, where he has had a head start. As of the Friday before the Iowa caucuses, Mr. Bloomberg had bought $30 million worth of TV ads in California and $24 million in Texas. Only his fellow millionaire, Tom Steyer, had purchased any ads in those states. According to The Wall Street Journal, Mr. Bloomberg “put about $200 million of his own money into his presidential campaign in its first five weeks.”

7. Ranked-choice voting may get a hearing. The complicated rules of the Iowa caucuses—in which supporters of candidates who finish below 15 percent at a caucus site get to shift their votes to one of the front-runners—are one way to handle elections with large numbers of candidates. A simpler way is ranked-choice voting, in which each voter is allowed to rank all candidates in order of preference. The idea is to reach a broad consensus; for example, someone who finishes second on everyone’s ballot would prevail over a candidate who gets the most first-choice votes but also the most last-choice votes.

Show Comments ()
Comments are automatically closed two weeks after an article's initial publication. See our comments policy for more.
Show Comments ()
Join the conversation: Login or create an account
Before you can comment, you need to update your profile to include your first and last name, as required in our comments policy. Then reload this page and you'll be set up for commenting. Update your profile
Advertisement
More: Election 2020 / US Politics