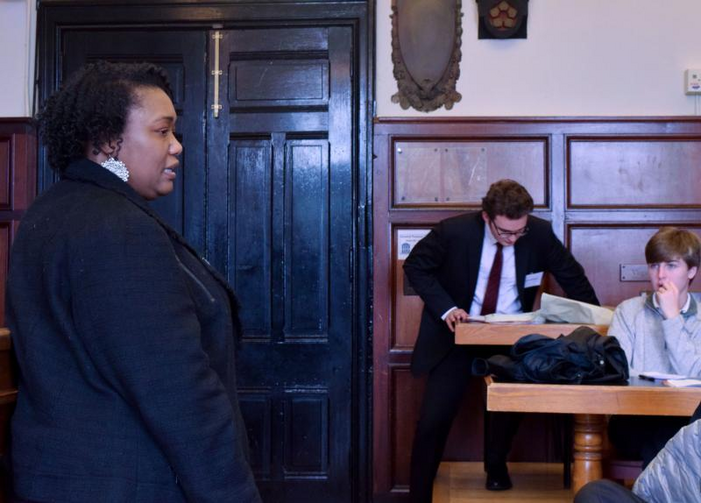 Gloria Purvis, host of "Morning Glory" on the Eternal Word Television Network, speaks at the 21st annual Cardinal O'Connor Conference on Life Jan. 25, 2020, at Georgetown University in Washington. The theme of the conference was "Anchored in Truth: Receiving & Proclaiming the Gospel of Life." (CNS photo/Sydney Clark)

Purvis, known for her work promoting the sanctity of life and the dignity of every human being, made the points in a Jan. 25 address at the 21st annual Cardinal O'Connor Conference on Life Jan. 25 at Georgetown University. She was one of several concurrent session speakers at the conference.

"You need to treat these people that you meet as long-lost cousins," Purvis told attendees at her session. "You really need to build a relationship."

Purvis emphasized that relationship-building is fundamental since the pro-life movement deals with heavy-hitting topics.

"African Americans need to know and understand that pro-lifers aren't using them as a political plot," stated Purvis.

She explained that African Americans often feel taken advantage of by the mainstream pro-life movement, leading to distrust and failure to commit to the cause.

"You don't care about me any other time, but when you wanna win an election, you come talking about you can't vote (for) so and so because of abortion," said Purvis. "But where are you all of these other times that concern me?"

Purvis challenged attendees to consider how the formation of the Black Lives Matter movement caused tension and division even among members within the pro-life movement.

"Somehow the things that we should all have in common with, especially as pro-life people, are for some reason, used to divide us," Purvis said.

In the early stages of the Black Lives Matter movement, she grasped the overarching theme of protesting racial disparities in police use of excessive force.

Purvis mentioned the incident of Tamir Rice, the 12-year-old from Cleveland who was playing with a toy gun when he was fatally shot by a police officer.

"Imagine the outrage from the black community," she told attendees. "People who are paid by the state to keep the public safe need to keep African Africans safe too, instead of behaving like extrajudicial executioners in our community."

Purvis discussed how blacks perceived the mainstream conservative pro-life people to be defending the police officer's actions, rather than acknowledging the extreme violence used against a 12-year-old boy.

Blacks understood the paradox concerning pro-lifers who defended the police officer, she said.

"How can you go on and talk about abortion, a child in the womb, and you can't talk about something that seems really clear about an innocent child on the playground? These are the things that are going on in people's minds as you are approaching them," said Purvis.

She emphasized that everyone wants to be seen as a person, and sometimes engaging with others requires more listening than talking. Taking up the mission of evangelizing within the black community must truly be a "labor of love," according to Purvis.

She cautioned the audience that this labor of love should not only be used during face-to-face interactions but also on social media.

Purvis recalled an incident where an African American woman talking about abortion and racism with a white woman on Twitter. The black woman later revealed that she had an abortion. The white woman then retweeted the comment and said, "You can't talk to me about racism because I've never killed a black person."

Another social media example she gave involved a black bishop from the Church of God in Christ who was discussing racism on Twitter. A pro-life activist replied, "Let me tell you about racism. Real racism is the abortion in your community, and that's your fault because you're doing nothing about it."

The conversation hadn't mentioned abortion before that comment. She also said this individual lacked knowledge about the bishop before joining the Twitter thread.

Purvis stated that the Church of God in Christ is the largest pro-life black Christian denomination in the country. Additionally, Purvis pointed out the black bishop was a known civil rights activist who wrote an open letter to Hillary Clinton regarding abortion in the black community and how she should oppose abortion.

Purvis said that she was saddened by the response on Twitter, wondering how a prominent pro-life activist didn't know any of the key background information.

She suggested those who are trying to evangelize need to review and examine their motivations and intentions before interacting with others.

"We cannot let our position as Catholics become politicized," said Purvis. "It should be as simple as, 'I want to follow truth and follow Christ.'"

Purvis also discussed how some pro-lifers are unaware that a number of Planned Parenthood facilities are strategically and conveniently placed within communities of color. Purvis claimed that people in certain communities may not see these facilities as primarily abortion clinics.

"Sometimes, some women only see Planned Parenthood as the place where they go and get their pills," said Purvis. "People have a different perspective and experience with that organization, and that helps when you want to go and have conversations about what Planned Parenthood also does."

Ultimately, black women have several pressures that could prompt them to get an abortion, according to Purvis. This could be their socioeconomic status, fear of not being able to financially support the child, the stigma of being a single mother, having a child out of wedlock or simply not knowing that there are other options available during the pregnancy.

"The abortion sidesteps the real issue," said Purvis. "If all you're telling poor women that the way to get out of poverty is abortion, that's not a solution. ... It's lazy."

Purvis concluded the session with a call to action: "What would be the action of love that you would like to see in the black community? I hope thriving, happy, healthy black families. Remember that going into conversations ... that's your motivation, that's the end goal."

Show Comments ()
Comments are automatically closed two weeks after an article's initial publication. See our comments policy for more.
Provide feedback on this article
Join the conversation: Login or create an account
Before you can comment, you need to update your profile to include your first and last name, as required in our comments policy. Then reload this page and you'll be set up for commenting. Update your profile
Advertisement
More: Abortion / Pro-Life