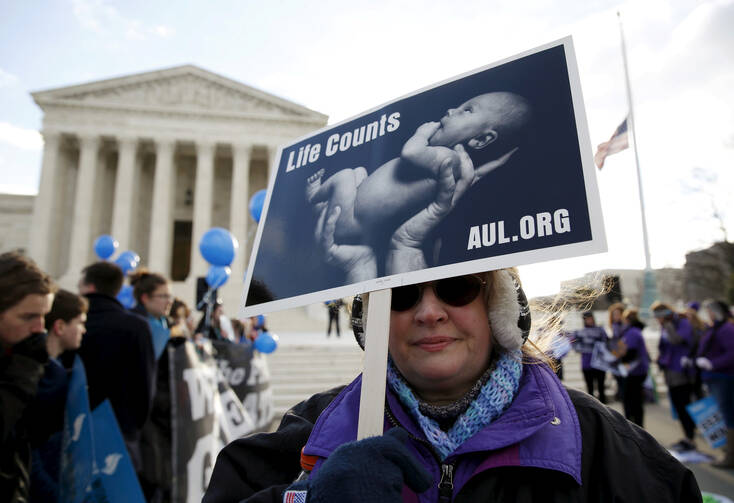 A pro-life supporter holds up a sign in front of the U.S. Supreme Court during a 2016 protest in Washington. (CNS photo/Kevin Lamarque, Reuters)

To put it mildly, the American Philosophical Association is not a bastion of pro-life sentiment. Hence, I was surprised to discover that the A.P.A. had organized a pro-life symposium, “New Pro-Life Bioethics,” at our annual conference this month in Philadelphia. Hosted by Jorge Garcia (Boston College), the panel featured the philosophers Celia Wolf-Devine (Stonehill College), Anthony McCarthy (Bios Centre in London) and Francis Beckwith (Baylor University), all of whom presented the case against abortion in terms of current political and academic values.

Recognizing the omnipresent call for a “welcoming” society, Ms. Wolf-Devine explored contemporary society’s emphasis on the virtue of inclusion and the vice of exclusion. The call for inclusion emphasizes the need to pay special attention to the more vulnerable members of society, who can easily be treated as non-persons in society’s commerce. She argued that our national practice of abortion, comparatively one of the most extreme in terms of legal permissiveness, contradicts the good of inclusion by condemning an entire category of human beings to death, often on the slightest of grounds. There is something contradictory in a society that claims to be welcoming and protective of the vulnerable but that shows a callous indifference to the fate of human beings before the moment of birth.

There is something contradictory in a society that claims to be protective of the vulnerable but shows a callous indifference to the fate of human beings before the moment of birth.

Mr. McCarthy’s paper tackled the question of abortion from the perspective of equality. A common egalitarian argument in favor of abortion and the funding thereof goes something like this: If a woman has an unwanted pregnancy and is denied access to abortion, she might be required to sacrifice educational and work opportunities. Since men do not become pregnant, they face no such obstacles to pursuing their professional goals. Restrictions to abortion access thus places women in a position of inequality with men.

Mr. McCarthy counter-argued that, in fact, the practice of abortion creates a certain inequality between men and women since it does not respect the experiences, such as pregnancy, which are unique to women. Some proponents of abortion deride pregnancy as a malign condition. A disgruntled audience member referred to pregnant women as “incubators.” Mr. McCarthy argued that authentic gender equality involves respect for what makes women different, including support for the well-being of both women and children through pregnancy, childbirth and beyond. He pointed out that in his native England, pregnant women acting as surrogates are given a certain amount of time after birth to decide whether to keep the child they bore and not fulfill the conditions of the surrogacy contract. This is done out of acknowledgment of the gender-specific biological and emotional changes undergone by a woman who has nurtured a child in the womb.

The most compelling argument against abortion remains what it has been for decades: Directly killing innocent human beings is gravely unjust.

Mr. Beckwith explored the question of abortion in light of the longstanding philosophical dispute concerning the “criteria of personhood.” The question of which human beings count as persons is closely yoked to the political question of which human beings will receive civil protection and which can be killed without legal penalty. The personhood criteria range from the most inclusive (genetic identity as a member of the species Homo sapiens) to the more restrictive (evidence of consciousness) to the most exclusionary (evidence of rationality and self-motivating behavior).

Mr. Beckwith has long used the argument from personal identity (the continuity between my mature, conscious self and my embryonic, fetal and childhood self and my future older, possibly demented self) to make the case against abortion, infanticide and euthanasia. To draw the line between personhood and non-personhood after conception or before natural death is to make an arbitrary distinction—and a lethal one at that. Mr. Beckwith noted, however, that none of the usual candidates for a criterion of personhood is completely satisfying. Even the common pro-life argument from species membership could, unamended, smack of a certain materialism.

The most compelling argument against abortion remains what it has been for decades: Directly killing innocent human beings is gravely unjust. Abortion is the direct killing of innocent human beings. But political debate rarely proceeds by such crystalline syllogisms. The aim of the A.P.A.’s pro-life symposium was to amplify the argument by showing how our practice of abortion brutally violates the values of inclusion, equality and personhood that contemporary society claims to cherish. In the very month we grimly commemorate Roe v. Wade, such new philosophical directions are welcome winter light.