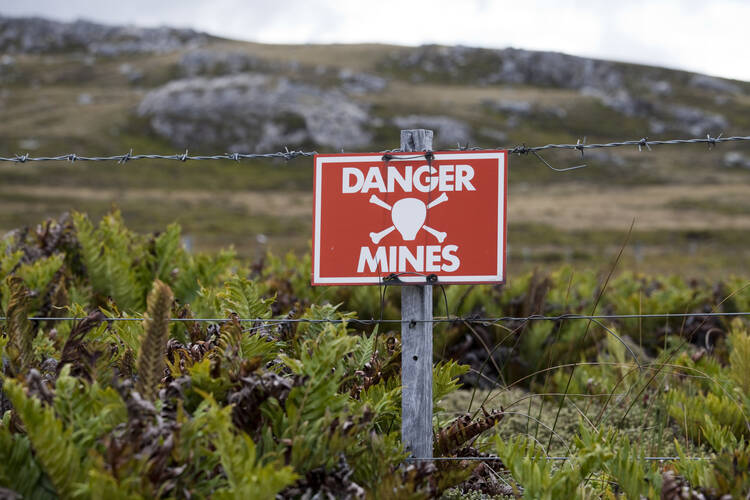 A warning sign marks one of the areas on the Falkland Islands not cleared of mines planted during the war with Great Britain  in 1982. (iStock/Gannet77)

My family was one of the first to visit the Czech Bohemian countryside after the Iron Curtain collapsed in 1989. Nothing, in my opinion, can match the charm of that fabled region of mysterious woods, sparkling streams and undulating forested hills. I recall we were walking in the former “no man’s land” on the West German/Czech border, where machine-gun emplacements, guard towers and patrol roads had fallen into disuse. Nature was reclaiming an area previously cleared only for avenues of fire. My three sons were bounding around, while my wife and I remarked upon the German gravestones still to be found under the pine trees. No one had lived here for some 45 years.

Then one of the boys came over to me and said: “Look, Daddy. What are those?”

Clustered at the base of a stream bank were several land mines, forgotten from the Cold War. I marched my family in the opposite direction, nature’s reverie shocked away by a fear that locked onto our every step. The attractive forest path might have enticed my whole family to slaughter.

“Look, Daddy. What are those?” Clustered at the base of a stream bank were several land mines, forgotten from the Cold War.

Another time in my travels I came across a strange comic book. It had no words because it was designed for the illiterate. It told the story of a farm girl who was violated by a land baron. To get revenge, she took the advice of another farmer who showed her how to put a bomb in the ground outside the baron’s door. To set the bomb, the rape victim made a trigger out of a lock of her own hair. The land baron was dramatically blown up.

This book, Mine Warfare, was printed in the millions and distributed to Chinese peasants by Communist activists during their decades-long war against the Kuomintang government, which ended with Mao Zedong’s victory in 1949. It showed how poor people could defeat a well-financed military by using remarkably deadly passive devices. Later, during the Vietnam War, “bouncing betties” would blow the leg off one soldier, then propel a secondary device into the air to kill even more. Then there were “toe-poppers,” which blew off only a part of a foot, causing other soldiers to become vulnerable to attack while they treated the wounded man. Today, of course, there are roadside bombs that destroy whole vehicles and incinerate those inside.

The mines I called in that did not explode are still there for all I know, still awaiting a day they can kill some poor devil.

As an artillery officer in the 1970s, I would call in airstrikes at U.S. exercise ranges in Kentucky. These were technological wonders to behold. A bomb would fall from an aircraft, and as it plummeted to the ground it opened like a piñata. From inside rained hundreds of bomblets, scattering bursts all across the countryside. The symphony of explosions was greeted with cheers because the target area was well and truly destroyed.

Of course, not all the bombs went off. I didn’t know that then, but I know it now. I think about a quotation I read much later in life, when John Woodward Phillip, a U.S. Navy officer in the Spanish-American War, upon seeing the enemy Spanish cruiser Vizcaya in flames, patiently told his men: “Don’t cheer boys. The poor devils are dying.” The mines I called in that did not explode are still there for all I know, still awaiting a day they can kill some poor devil. In its latest report, Landmine and Cluster Munition Monitor says there is “no credible estimate” of the number of mines buried worldwide, but at least 60 countries are still contaminated with them.

In 1998, the British government put out for bid a contract to disable the dozens of minefields left behind during the Falklands War, which took place 16 years earlier; that task is still not complete. Angola still has more than 1,000 minefields from a civil war that lasted from 1975 to 2002. There are still minefields in Bosnia from the Balkan Wars of the 1990s, and mines are still being planted amid conflicts across the Middle East.

In 1998, the British government put out for bid a contract to disable the dozens of minefields left behind during the Falklands War, which took place 16 years earlier; that task is still not complete.

Those who laid these mines are long gone; the wars, long over. For whatever reasons they were once placed in the ground, nothing compelled anyone to remove them. We rained millions of cluster bomblets on Vietnam; the Soviets did the same in Afghanistan.

Shells left over from World War I (that’s correct, World War I) are found weekly in Belgium and France. Explosives experts are still defusing the “Iron Harvest” planted in the battlefields of the Somme. I recall an electric jolt of panic when I saw our friend’s toddler son happily brushing away the dirt around a hand grenade on a pathway; it was left over from the Great War.

Those who die from forgotten mines tend to be animals, children or farmers in distant lands. Prosthetics allow those whose legs and arms are blown off to hobble around, the suffering of body and mind lasting forever.

But the United States continues, along with other major industrial nations, to sell such cluster bombs around the world. Those who continue to manufacture these devices are technicians, businessmen, military specialists and others with advanced degrees. Those who employ the land mines are military personnel, ideologues or other saviors who never see down the road. Perhaps you know some of them.

Then there are those who learn how to disable roadside bombs, build mine-detecting robots and develop mine-identification technologies. These people often work for the same country that made the mines in the first place.

No one knows where most mines are, for neither the peasants nor the fighter bombers left maps. Abandoned farmlands, maimed mothers, crippled children and broken menfolk are the never-ending legacy of sowing these pods of death. Today mine detection in Angola uses a method of sticks tied together in a foot-wide square. The square is laid on the ground, and a knife is prodded inside the marked area to see if something is there. That is about where shared modern technology has brought us: Poorer nations with vast numbers of minefields cannot afford to safely remove them.

We in the West could win over whole populations if we developed mine-detection technology that brings us out of the 19th century and that can be shared cheaply and effectively. Imagine a Nobel Prize for the scientist who saves the lives of those yet to be born, who clears fields so they can once again bloom with food.

Regardless of who placed them, the mines are there. I never signed up to kill future generations anywhere; no one I know did. Yet we have a chance to do something good. Perhaps the same politicians who avoid the Ottawa Treaty to ban anti-personnel mines might want to be the ones to introduce a modern detection technology that finds them. They can win the prize that clears minefields once and for all, so families do not tread in fear anymore and can enjoy a walk in the country. 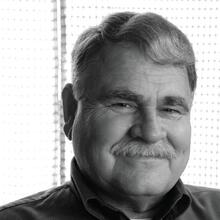 John William Davis is a retired U.S. Army counterintelligence officer, civil servant and linguist. He is the author of Rainy Street Stories: Reflections on Secret Wars, Terrorism, and Espionage.