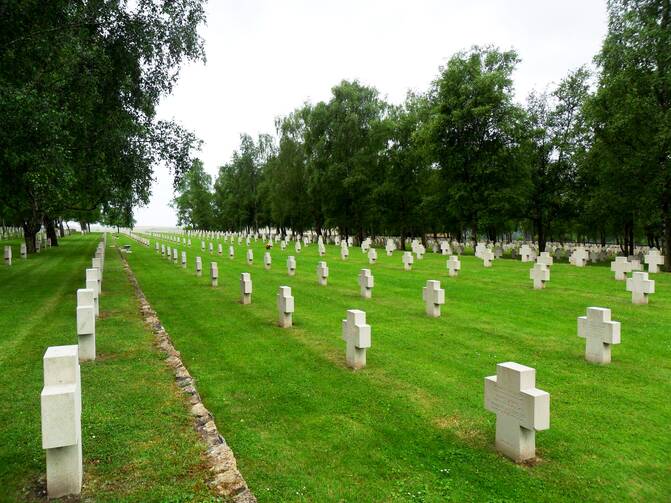 One Christian corporal work of mercy, to bury the dead, is perhaps nowhere more challenging—and challenged—than when it comes to the remains of German soldiers killed during World War II. Millions of German soldiers were killed or went missing in action in that conflict—with more than 1 million vanished within the borders of the former Soviet Union alone, according to Diane Tempel-Bornett, spokeswoman for the German War Graves Commission.

The commission—a volunteer-driven organization unaffiliated with the German government—is tasked with the humane burial of Germany’s war dead from both world wars. It marked its 100th anniversary last year, according to KNA, Germany’s Catholic News Agency. The commission’s goal is to locate and bury all German war dead with dignity.

“For us Germans, it is not easy to remember our dead because they brought about terrible atrocity with two world wars,” Ms. Tempel-Bornett told America. “That is why German war cemeteries are minimalistic. For the Germans there can be no hero tributes.

“Nevertheless, these German soldiers, fallen as invaders across Europe,” she said, “are also sons and fathers, brothers and beloved husbands. Thus every mourning is justified.”

“For us Germans, it is not easy to remember our dead because they brought about terrible atrocity with two world wars.”

Locating, identifying and burying these remains is no easy task and has been met with opposition for decades. Strong resentments are still present in countries whose people were victimized by the German army during World War II.

The Soviet Union stood firmly against locating German war graves in Russian territory. Information on German war dead in the U.S.S.R. was only made fully available after its collapse in 1991.

The German cemetery in Prague remained derelict and was vandalized for more than 50 years because of bitter feelings left over from the war. In France, civilians in a Pyrenees town concealed the bodies of a German World War II aircrew downed over their community and kept it secret, expressing unhappiness when the site was excavated in 2013. And the decayed remains of 4,000 German soldiers were stored in cardboard boxes in a factory in the Czech Republic for more than 60 years.

Locals in the Czech Republic who assisted the German war graves commission with burials in 2000 were called “collaborators” and threatened with violence; a plan to create a cemetery for 5,600 German soldiers in the Czech Republic met with fierce opposition in 2010 from citizens who claimed they did not want their relatives to be buried “next to fascists.”

Yet the steel-helmeted soldiers who once terrified the world left behind grieving family members and descendants—many of whom were children in the postwar era and lived in a state of limbo, not knowing the location or circumstances of their relative’s death. Some Germans spend decades trying to discover what happened to missing or dead relatives, like two brothers who finally found their lost father’s unmarked burial place in Ukraine in 2019.

Locating, identifying and burying these remains is no easy task and has been met with opposition for decades. Strong resentments are still present in countries whose people were victimized by the German army during World War II.

The War Graves Commission has continuously maintained that, while the deceased may have been guilty of crimes during life, all human beings are entitled to a decent burial. “We say everybody has the right to a grave,” one representative of the commission told the Chicago Tribune. “When we find them, we do not ask what they have done. We simply ask to bury them.”

Ms. Tempel-Bornett said she has witnessed many personal expressions of relief and tragedy in putting the individual dead to rest: an older man who expressed both sorrow and happiness attending the 2018 burial of his father, missing since 1944, in Russia; a 94-year-old woman who brought earth from her South German home region to sprinkle on her brother’s grave in the Caucasus; and a man who collapsed in tears in front of a memorial stone inscribed with the name of his father, who was still missing. Although many surviving relatives are now elderly, Ms. Tempel-Bornett said, they take “strenuous efforts upon themselves even in advanced age to travel to a grave or to visit the area where their fathers, brothers and uncles died.”

“For many, it is a great relief to know that their fathers and grandfathers are buried with human dignity in a maintained military cemetery. They are unbelievably grateful and often many tears flow,” she said. “I have constantly experienced people say, ‘At last the circle has closed. I am thankful to know where he is buried.’”

After the collapse of the Soviet Union, the commission was able to work in Eastern European countries for the first time. Despite the fact that many gravesites were built over or destroyed, the commission has recovered more than 900,000 war dead and reburied them in proper graves, according to Ms. Tempel-Bornett. Remains of German soldiers continue to be discovered—recently nearly 2,000 bodies were found near the site of the Battle of Stalingrad in Russia, and another estimated 100 were unearthed in Estonia in 2018.

“We recover continuously about 20,000 dead per year; we can identify just under half of them,” said Ms. Tempel-Bornett. “We have also sadly recovered scores of dead whose families are no longer living.”

“We want as the War Graves Commission to do everything we can to preserve peace and to use our war graves as learning places, so that young people can learn from the past and above all from the failures of history.”

Identifying the dead remains difficult. Historical artifacts such as medals, belts, letters, photos and pieces of uniforms can be helpful—even old wedding rings, according to Ms. Tempel-Bornett. The commission welcomes all information that could help in the search.

“Sometimes I am also present at exhumations. When I watch how my colleagues gently extract the bones of a soldier from the earth—so as not to wound him again—show his skull and say: ‘Look, he was only 25 years old,’ the insanity of war is clear to me,” she said. “I think of what this young soldier probably saw and thought of in his last minutes. And because I myself am a mother, I think of his mother who lost her child. For nothing.”

The commission has adopted “Reconciliation Over the Graves” as its official motto and works with youth groups from different countries to promote international peace and tolerance. Students from Germany work together with students from other European countries, including Poland, Ukraine and Russia, to maintain burial sites and perform other outdoor volunteer work for the commission.

“We want as the War Graves Commission to do everything we can to preserve peace and to use our war graves as learning places, so that young people can learn from the past and above all from the failures of history,” said Ms. Tempel-Bornett. She added that working with the youth groups to promote multicultural understanding is one of the most rewarding experiences of her job.

“I accompany youth at work camps and can share in the experience of how young people from different nations can learn to interact, get to know each other and sometimes even love each other,” she said.

“The most important thing is that the prejudices disappear after only a short time.” 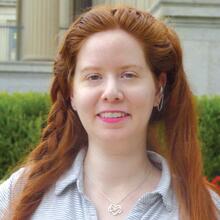 Zita Ballinger Fletcher is a journalist and author, bilingual in English and German.

@zita_reports
Show Comments ()
Join the conversation: Login or create an account
Before you can comment, you need to update your profile to include your first and last name, as required in our comments policy. Then reload this page and you'll be set up for commenting. Update your profile
Show Comments ()
Comments are automatically closed two weeks after an article's initial publication. See our comments policy for more.