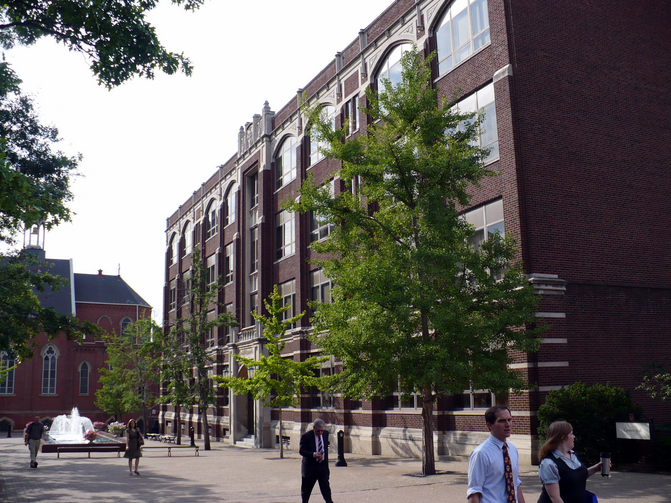 Duquesne University, a Catholic college in Pittsburgh, Pa., has been at the center of a battle over the unionization of adjunct faculty. (Wikimedia Commons)

WASHINGTON (CNS) -- A Jan. 28 decision by the U.S. Court of Appeals in Washington reversed a 2017 ruling by the National Labor Relations Board ordering a Pittsburgh Catholic university to bargain with its adjunct faculty group.

The Association of Catholic Colleges and Universities applauded the decision in Duquesne University of the Holy Spirit v. National Labor Relations Board.

"For us, this has always been a case about how the government decides to recognize our designation as faith-based institutions," the association said.

It also noted that when the NLRB addressed unionizing on Catholic college campuses, "it chose to limit the designation of 'Catholic' strictly to the work that is done by professors teaching religion or other narrow corners of our institutions to be decided, institution-by-institution, by the NLRB itself."

The ACCU said it was pleased the appeals court affirmed the ruling of the Supreme Court in its 1979 case NRLB v. Catholic Bishop of Chicago. In that decision the court rejected the labor group's attempt to expand its reach to include religious institutions, stressing that problems can arise when a government office tries to determine if certain activities are religious or not.

The case that was before the appeals court goes back to 2012 when some of the adjunct faculty members at Duquesne University in Pittsburgh sought to unionize. The United Steel, Paper and Forestry, Rubber, Manufacturing, Allied-Industrial and Service Workers International Union and AFL-CIO-CLC petitioned the NLRB to certify it as the exclusive bargaining representative for the adjunct faculty at the university.

And in 2017 the NLRB ordered the school to bargain with a union representing the school's adjunct faculty. Duquesne petitioned for a review saying the schools religious mission placed it beyond the board's jurisdiction, which the appeals court agreed it did.

The university argued in December 2018 that the National Labor Relations Act, when read in light of the religious freedom clause of the First Amendment, does not authorize the labor board to exercise jurisdiction in this matter.

The federal appeals court not only sided with the university in this case, but it also noted that the terms of employment of adjunct faculty members are note "necessarily equivalent to the permanent faculty."

The ACCU statement stressed that it has "consistently noted that unions have been welcomed on a number of our Catholic campuses. Our point is more fundamental: Empowering government offices to decide which components of a university are faith-based is simply the wrong way to protect faculty."

Carol Zimmermann - Catholic News Service
Provide feedback on this article
Join the conversation: Login or create an account
Before you can comment, you need to update your profile to include your first and last name, as required in our comments policy. Then reload this page and you'll be set up for commenting. Update your profile
Show Comments ()
Comments are automatically closed two weeks after an article's initial publication. See our comments policy for more.