The Editors: Congress must limit the president’s war powers 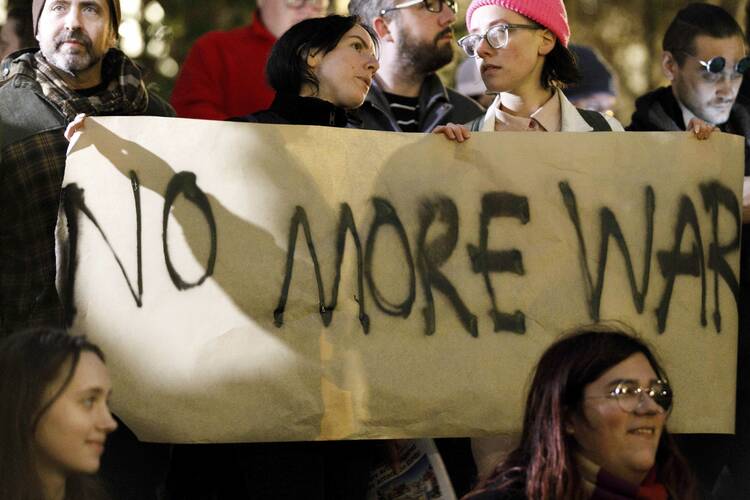 Hundreds in Portland, Oregon mobilized on January 3, 2020 for an emergency protest against escalating hostilities in Iran. Portland Democratic Socialists of America, along with other progressive groups, organized the rally in response to the recent US drone attack on Iranian military chiefs. (Photo by John Rudoff/Sipa USA via AP Images)

As a consequence of the drone strike used to kill Qassim Suleimani, the commander of Iran’s Quds Force, the United States has been reminded that the legal question of when and whether the use of military force is legitimate has been left murky by design. In the days immediately following the strike, President Trump and various administration officials provided a variety of legal justifications, some of them overlapping and conflicting.

Most of these justifications depend upon the 2002 Authorization for the Use of Military Force Against Iraq, which is still in force today. (The 2001 A.U.M.F. against those involved in the Sept. 11 terrorist attacks also remains in force.) While presidents have many avenues through which to justify the use of the military—pre-eminently through the inherent powers of the commander in chief to act in defense of the United States—such “statutory authorizations” from Congress have become, under the terms of the War Powers Resolution of 1973, the standard model by which military interventions are legitimated.

When the A.U.M.F. was passed in 2002, legislative debate was focused on reports (since discredited) of the presence of weapons of mass destruction in Iraq. That the authorization could be used almost two decades later to justify the targeted killing of Iran’s top general certainly was not in the minds of those who voted for it, many of whom have since been replaced in Congress.

The killing of General Suleimani is only the latest—and by no means unique—example of reliance on an A.U.M.F. long after its passage and far outside its reasonable scope.

But the killing of General Suleimani is only the latest—and by no means unique—example of reliance on an A.U.M.F. long after its passage and far outside its reasonable scope. When President Obama used a drone strike to kill 150 people in Somalia in 2016, he justified that action under the 2001 A.U.M.F., arguing that the targets were Islamist terrorists, part of the “associated forces” of Al Qaeda against whom Congress had authorized military force.

The problem is that such justifications have become largely pro forma because Congress has not provided itself with a mechanism to reject or limit them or even to regularly debate whether they have been misused. Indeed, it is more accurate to say that with these A.U.M.F.s, Congress has instead abdicated its constitutional responsibility for declarations of war. Democratic candidates for the 2020 presidential election are still arguing about how they voted on the 2002 Iraq authorization. There is plenty of motivation for legislators to avoid going on the record, handing off these choices and their consequences to the president.

With these A.U.M.F.s, Congress has instead abdicated its constitutional responsibility for declarations of war.

In addition to undermining the constitutional separation of powers, this state of affairs makes unwise and unjust use of military force more likely. Even if Congress does rouse itself to object, revoking an A.U.M.F. and limiting the president’s authorization for force would often require a veto-proof majority. Absent that, the status quo is a continuation of armed conflict in whatever way the president deems justified.

The Editors: The impeachment process shows why we need to clarify executive privilege
The Editors

Any “statutory authorization” under the War Powers Resolution should have an expiration clause, and the War Powers Resolution itself should be amended to require this. If Congress had to vote every 180 days to extend these authorizations, the initial debates about whether or not to start down these roads would look far different. The president would still have inherent authority to defend the United States against attacks but would not hold a blank check for military intervention.

If Congress cannot muster the votes to authorize military action—or the courage to conduct a debate about it—the default should be the cessation of conflict, not ongoing and endless war.