The Editors: The impeachment process shows why we need to clarify executive privilege 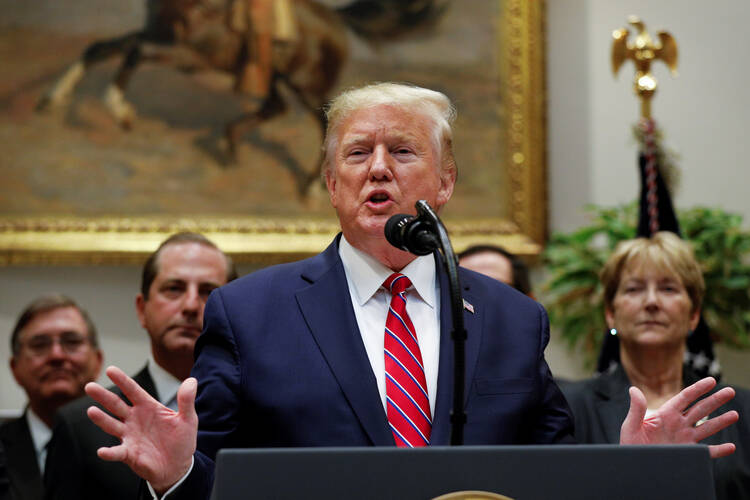 In the House Judiciary Committee’s opening impeachment hearings on Dec. 4, Jonathan Turley, a legal scholar called by the Republicans, warned members of the committee that they could be setting a dangerous precedent. If they proceeded without subpoenaing key witnesses, he argued, they would be answering the president’s extreme and unsupportable theory of executive supremacy with an equally unsupportable version of legislative supremacy—especially if they charged President Trump with obstruction because he presented legal challenges to the subpoenas they did issue.

Instead, Mr. Turley argued, the question of Mr. Trump’s extraordinarily broad claims of executive privilege should be tested in the courts, as they were during the Nixon impeachment inquiry. Without reaching any judgment as to how the House should proceed on impeachment, Mr. Turley’s observations highlight the need for a clear process for the prompt resolution of contested claims of executive privilege.

Instead, Mr. Turley argued, the question of Mr. Trump’s extraordinarily broad claims of executive privilege should be tested in the courts, as they were during the Nixon impeachment inquiry.

On the same day as this hearing, America hosted an event focused on understanding the court case that helped lead to President Nixon’s resignation, featuring a conversation between our editor in chief, Matt Malone, S.J., and Philip Lacovara, who, as counsel to the Watergate special prosecutor, argued United States v. Nixon before the Supreme Court in 1974. (Mr. Lacovara currently serves on the board of America Media.) Video of that event and a written interview with Mr. Lacovara are available at americamagazine.org/usvnixon. The Supreme Court handed down its unanimous decision requiring Mr. Nixon to produce secret recordings of Oval Office conversations less than three weeks after oral argument, and Mr. Nixon resigned 16 days later.

While the Supreme Court moved with impressive speed in United States v. Nixon, with only three months elapsing between the initial subpoena and the case’s final resolution, such efficiency is the exception rather than the rule in legal proceedings. In the contemporary impeachment inquiry, the fear that Mr. Trump’s claims of privilege would be tied up in court for months has led the House Democrats to declare that they will consider Mr. Trump’s refusal to cooperate with the inquiry as itself constituting obstruction of Congress. (In early October, Mr. Trump made the bizarre claim that the impeachment inquiry itself was “constitutionally invalid and a violation of due process” and directed the entire executive branch to refuse to cooperate.)

Trump’s attacks on public servants undermine the Constitution—and his own office.
The Editors

Every U.S. citizen should be concerned about the Trump administration’s peculiar intrigues in Ukraine—withholding military aid in order to pressure another country into the simulacrum of a corruption investigation meant to damage a political rival, former Vice President Joseph R. Biden Jr. They should also be able to recognize that the facts already in evidence require investigation and response. But reasonable people can reach different judgments about how the House should proceed and on what schedule. There are enough differences from the Nixon case—including Mr. Trump’s even broader pre-emptive refusal to cooperate with Congress and the nearness of the 2020 presidential election—that its precedent cannot cleanly determine the proper course of action.

All of this points to the need to clarify the scope of executive privilege and to establish a streamlined legal process to resolve such claims quickly. Otherwise, future presidents may continue to be incentivized to claim privilege in order to delay congressional investigations while simultaneously establishing a pretext for rejecting their findings as insufficient. Even though such legislation has no chance of proceeding given current partisan divisions, it is necessary to begin the slow work of closing this loophole in our system of checks and balances.

1
Spanish priest: ‘Amoris Laetitia’ allows the church to ‘untie the knots’ in Catholic morality since ‘Humanae Vitae’
Gerard O’Connell
2
How America Sold Out Little League Baseball
John W. Miller
3
The only Trappist brewery in the U.S. is closing (and IPAs are to blame)
John W. Miller
4
Cardinal Cupich: The Second Amendment did not come down from Sinai
Blase J. Cupich
5
‘They are traumatized’: How Catholic Charities is responding to Uvalde after the shooting
Kevin Clarke