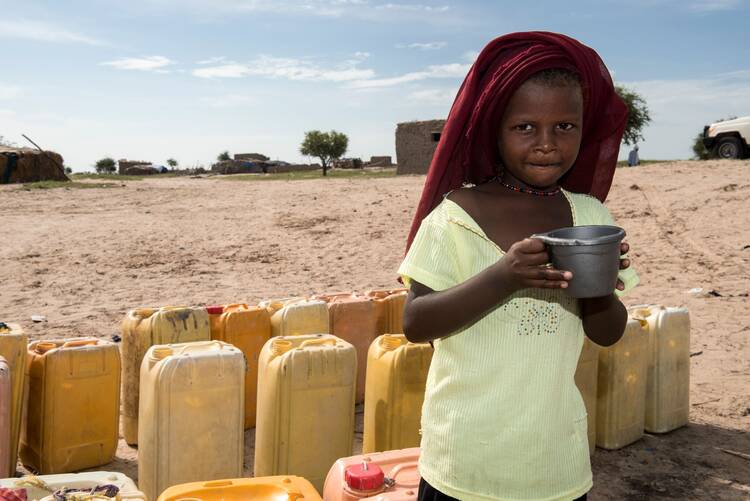 Daniel Dauda and his family heaved a sigh of relief when they saw the man in a video released by the militants. Rev. Lawan Andimi, 58, Mr. Dauda’s father-in-law, had gone missing on Jan. 2 after a Boko Haram raid on Michika, a town in Adamawa, northeast Nigeria. The family found out about the pastor’s capture via a six-minute Facebook video released three days after his kidnapping, where he softly but bravely told his loved ones not to panic but to pray.

“Be patient. Don’t cry, don’t worry, but thank God for everything,” he said in the video. He also called for Christian leaders and the governor of Adamawa State to rescue him.

“The attack occurred at about 6:30 p.m. and lasted for more than two hours,” Mr. Dauda said. The community was still enjoying the new year celebrations when gunshots rang out. People “flew out in different directions,” Mr. Dauda said. Some went high up into surrounding mountains for safety. But when the attackers left and everyone returned, Mr. Andimi was not among them.

His family and community members straddled a state of despair and hope as they waited to hear of his fate. The video proved that he survived the attack, but it confirmed that he was in grave danger, a prisoner of militants who have plagued northeast Nigeria for over a decade. Within days, sadly, they had their answer. According to Nigerian media reports, Mr. Andimi had been executed by his captors on Jan. 20.

The pastor’s murder is only the latest in a surge of attacks in the West African nation. On Jan. 19, Boko Haram insurgents ambushed two separate Nigerian army patrols, killing 17 and abducting a number of soldiers. Just a few weeks earlier, the militants had ambushed a bridal party on Dec. 27, killing Martha Bulus, a young bride set to wed on New Year’s Eve, and her friends.

The pastor’s murder is only the latest attacks in the West African nation. On Jan. 19, Boko Haram insurgents ambushed two separate Nigerian army patrols, killing 17, and slaughtered a bridal party on Dec. 27.

Boko Haram has waged a religious ideological war in the region since 2009. Its goal is to crush Western influences and create an Islamic caliphate.

Some 27,000 people have been killed since the start of the insurgency 11 years ago. Nearly two million people remain displaced by the violence and many more are in need of aid, according to the United Nations. Local authorities say the true numbers are likely much higher.

The group led by Abubakar Shekau calls itself Jama’atu Ahlis Sunna Lidda’awati wal-Jihad and has links to ISIS. It split in 2016 when ISIS backed the creation of a new faction called Islamic State West Africa Province.

The Shekau-led Boko Haram took responsibility for Mr. Andimi’s kidnapping. Mr. Dauda describes the pastor, the local representative of the Christian Association of Nigeria, as kind, giving and peaceful.

“He talked in the video just the way he used to interact with others before his abduction—fearless and courageous,” Mr. Dauda said. His family, church members and the entire Michika community are distraught, he added. “My wife has been so traumatized.”

Surge in violence
Violent attacks by militants diminished briefly in recent years, and the groups lost previously controlled territory under Nigeria’s President Muhamadu Buhari. The president had been elected in 2015 on the strength of promises to end terrorism and improve security in the country.

But attacks have crept up steadily over the past year. Public confidence in the administration’s ability to combat terrorism and secure the lives of those in the region has plummeted.

I.S.W.A.P. executed 11 men, most of them thought to be Christians, on Christmas Day, casting a pall over the festive season. The group claimed it was taking revenge “for the killing of our leaders Abu Bakr al-Baghdadi and Abu Hassan al-Muhajir in Iraq and Syria.” Al Baghdadi is the ISIS leader who was targeted and killed in a U.S. military raid last October. Al-Muhajir, the group’s spokesman, was killed in a separate operation a day later.

The militants are active in Nigeria as well as neighboring Niger, Chad and Cameroon. Since December alone, militants have attacked Biu village in Borno, razing a school and a church building. Thirty people were killed in a bomb blast in Gamboru, on the border with Cameroon, the deadliest attack this year in Nigeria. Last week, a military base in Niger was attacked, and 89 soldiers were killed.

Attacks on religious houses and clergy members have raised tensions in a country where ethno-religious conflict is rife and has led to the deaths of thousands in recent years. A separate conflict brewing in Nigeria’s middle belt is fueling that fire: Cattle herders, often members of the minority Fulani ethnic group, have clashed with farmers from the dominant Berom tribe over disappearing land resources in an area already experiencing the dire effects of a changing climate.

The conflict often develops religious tones since the herders are often Muslim, and the farmers mostly Christian. Nigeria has also experienced a surge in kidnappings by bandits in the country’s northwest region. Four students of the Good Shepherd Major Seminary in Kaduna state were taken in one such attack on Jan. 9 and have not been released.

“Christians feel unsafe”
The separate conflicts contribute to a general atmosphere of insecurity and fear in Nigeria. The abduction of Leah Sharibu, a 16-year-old girl who remains in captivity for refusing to renounce her Christian faith, is still fresh for many. “Many people especially Christians in northern Nigeria are living in fear,” said the Rev. John Hayab, an official with the Christian Association of Nigeria’s northern arm. Many villagers are too scared to attend regular church programs, he said.

In the hot zones where Islamic militant groups operate frequently, churches have been forced to shut down to avoid attacks or kidnappings. Mr. Hayab says clergy are repeatedly targeted. “If you travel, because of the fear of these evil men, Christian clergy have to disguise and move like they are not Christians since they can quickly recognize you by your way of dressing,” Mr. Hayab explained.

Humanitarian aid agencies providing relief in the region have been hit, too. Four employees of the U.S.-based nonprofit Action Against Hunger were executed in December. More than 38 aid workers have been killed since the start of the conflict, according to the United Nations.

Catholic Relief Services continues to operate in the region, but its staff members say the security situation makes it difficult to reach the thousands in need of relief. “C.R.S. has changed the way it reaches communities in need,” said Jerry Farrell, the deputy country representative. “It has meant that at times C.R.S. staff cannot use some local roads for weeks at a time or only during a few hours during the day.”

While the Nigerian government has repeatedly claimed to have defeated the militancy in the north, continued attacks from the groups say otherwise.

The Catholic Bishops Conference of Nigeria condemned the violence and called on the government to ensure justice in a press statement. “We recognize the efforts being made by the government to fight insecurity in the land,” read the release signed by the Most Rev. Augustine Obiora Akubeze, the conference president. “However, we emphasize that a lot more still needs to be done in this regard. We reiterate that without adequate security of lives and property, there can be no stability and enabling environment for meaningful development.”

In December, U.S. Secretary of State Mike Pompeo announced that Nigeria was on a special watch list of countries with “governments that have engaged in or tolerated “severe violations of religious freedom.” The United States also designated Boko Haram as an “entity of particular concern” along with Al Qaeda, the Taliban and ISIS.

Militants in Nigeria have expanded their reach, mounting attacks in neighboring countries. Kidnappings and ransom are a major means to accumulate funds. Farther east in Mali and Burkina Faso, other jihadist groups like the Islamic State in the Greater Sahara are active, launching attacks, killing thousands and prompting a humanitarian crisis, U.N. officials report.

While the Nigerian government has repeatedly claimed to have defeated the militancy in the north, continued attacks from the groups say otherwise.

The militants’ expansion prompted a regional response operation launched with the formation of the Multinational Joint Task Force, a 10,000-strong force of troops from Chad, Cameroon, Nigeria and Niger.

But Chad announced in January that it was pulling out all troops that were deployed in Nigeria, causing widespread fear of attacks in areas the troops secured. Chadian officials said the force had completed a nine-month mission in the Lake Chad Basin where ISWAP is currently most active. Nigerian troops also pulled out of the vicinity recently. In a panic, villagers fled to Maiduguri, the Borno state capital, for protection.

New strategies to end insurgency
Analysts say that Nigeria’s military response to the insurgency has not proven effective and can no longer be sustained in ending the violence.

A broadened, multi-pronged approach that focuses on dialogue and negotiations and consults with local communities, among other things, is crucial, according to Akinola Olojo, a senior researcher with South Africa-based Institute for Security Studies.

Negotiations with Boko Haram have been held in the past but yielded few results because of “the lack of political will to follow through, as well as a lack of consensus regarding objectives, process and expected outcomes on the part of government actors,” Mr. Olojo told America.

Negotiations have worked in some instances and have helped free some of the kidnapped schoolgirls. On Jan. 15, Nigeria’s State Security Service partnered with Ahmad Salkida, a journalist covering Boko Haram’s activities, to secure the release of five persons abducted in December. Three of them were aid workers.

The United States and other foreign powers can meaningfully support this approach by creating the conditions necessary for dialogue, Mr. Olojo said. “The U.S. has previously supported the fight against terrorism by training troops and providing intelligence [and] has what can be recognized as convening power, the capacity to bring together key stakeholders to deliberate on security issues at a global or strategic level.”

While local and multinational security analysts ponder the next, best steps to finally put an end to Boko Haram terror in Nigeria, Mr. Andimi’s execution will likely not be the last outrage Nigerians will endure. 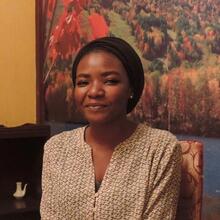 @Shollytupe
Show Comments ()
Join the conversation: Login or create an account
Before you can comment, you need to update your profile to include your first and last name, as required in our comments policy. Then reload this page and you'll be set up for commenting. Update your profile
Show Comments ()
Comments are automatically closed two weeks after an article's initial publication. See our comments policy for more.