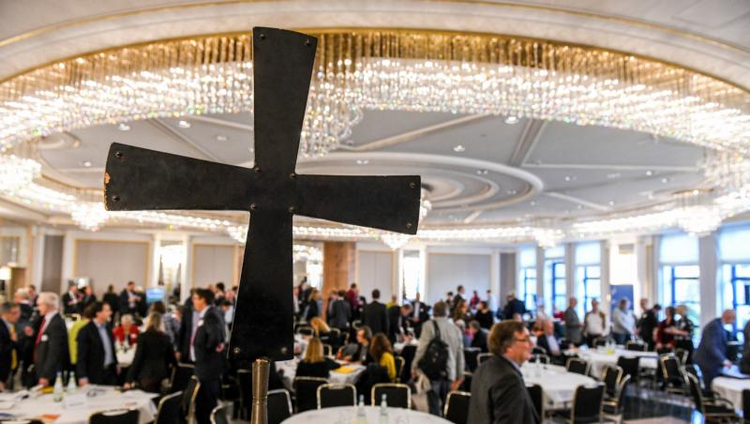 A cross is displayed during a meeting of the Central Committee of German Catholics in Bonn Nov. 22, 2019. Catholic leaders in Germany have compiled responses from lay Catholics in areas related to who holds power in the church, sexual morals, the role of priests and the place of women in church offices in preparation for an upcoming synodal assembly to debate church reforms. (CNS photo/Harald Oppitz, KNA)

FRANKFURT, Germany (CNS) -- Catholic leaders in Germany have compiled responses from lay Catholics in areas related to who holds power in the church, sexual morals, the role of priests and the place of women in church offices in preparation for an upcoming synodal assembly to debate church reforms.

More than 940 suggestions and questions had been submitted by early January in advance of the Jan. 30-Feb. 1 assembly in Frankfurt, reported KNA, the German Catholic news agency.

The synodal assembly is one segment of the synodal path, which the German bishops agreed to stage at their annual meeting last March.

The synodal assembly will include 230 members. It is the highest decision-making body of the synodal path, an effort by the bishops' conference and lay Central Committee of German Catholics to restore trust following a September 2018 church-commissioned report that detailed thousands of cases of sexual abuse by Catholic clergy over six decades.

Comments will continue to be accepted through Jan. 23 at the website of the German bishops' conference.

The bishops and the lay group are collaborating in planning the synodal assembly. During a September plenary meeting, the bishops approved statutes to guide discussions at the assembly.

German church officials say the synodal assembly is not meant to be a synod in the classic sense.

In describing the synodal path, KNA reported that the inclusion of the term synodal in the name of the reform process reflects that the dialogue, initially limited to two years, is more than a nonbinding conversation. As with a synod, each respective local bishop will determine whether the decisions reached will be implemented.

Several high-ranking church leaders have weighed in on the upcoming assembly.

Bishop Franz Jung of Wurzburg called for greater patience in the debates on church reform.

The synodal path to discuss reforms was "initially, first and foremost, about the church in German forming an opinion," Bishop Jung told a new year's reception in Wurzburg. "It is still unclear what decision-making scope will be granted to individual local churches and how much regional diversity Catholic unity can take."

KNA reported he said it also was unclear if there could be different speeds on the path to a renewed church.

The synodal path will be judged by the extent to which divergent views will be allowed to be heard, Bishop Jung explained. It is important "that one endeavors to lead the discussion objectively and above all to preserve the inner unity as far as possible," he said. "It's an enthralling task."

However, several German church leaders, including Cardinal Rainer Maria Woelki of Cologne and Bishop Rudolf Voderholzer of Regensburg, have voiced skepticism of the synodal path.

They have maintained that any decisions within the church should be left to the bishops alone. In addition, they have said the synodal path should not be interpreted as a "quasi-parliamentary vote on faith."

Other observers have said the most controversial issues confronting the church cannot be decided in Germany and can only be addressed within the Vatican on behalf of the worldwide church.

Elsewhere, Bishop Franz-Josef Overbeck of Essen called on the German church to embrace the synodal path of reform discussions as a chance to make a fresh start and to become "smaller and more humble."

KNA reported that in a statement read at all parishes of the diocese in early January, the bishop called for the church to allow "differentiated, multi-layered answers and refrain from raising itself above other people in a know-all and arrogant manner."

Bishop Overbeck called on the church to discuss the issue of power within its institutions, adding that more controls needed to be imposed. He also said the church must address celibacy, which placed a heavy burden on many priests.

Issues of sexual morality and partnership needed to be reassessed, and many people found it unacceptable that women were kept out of the most important positions of the church, the bishop added.

Earlier, in a new year's homily, Bishop Overbeck described gender justice as an "issue of the century" and urged the church to address it.

However, KNA reported in mid-January the bishop said he did not want to raise false expectations regarding the ordination of women in the upcoming discussions.

"But I also belong to those bishops who do not want to slam the door shut in that regard," he told a meeting of 400 priests and laypeople from through the Essen Diocese.

Increasing the role of women in the church is one of the core issues to be debated in the synod assembly. Church officials have repeatedly pointed out, however, that St. John Paul II declared in 1994 that the church had "no authority whatsoever" to ordain women as priests.

A statement on the bishops' conference website said the "dissatisfaction of many believers" was the starting point for the synodal path, which would be the first national consultation since a 1971-1975 synod at Wurzburg on implementing reforms of the Second Vatican Council.

It added the issues of priestly celibacy and the ordination of women could only be "addressed and clarified" by the whole Catholic Church.

Show Comments ()
Comments are automatically closed two weeks after an article's initial publication. See our comments policy for more.
Provide feedback on this article
Join the conversation: Login or create an account
Before you can comment, you need to update your profile to include your first and last name, as required in our comments policy. Then reload this page and you'll be set up for commenting. Update your profile
Advertisement
More: Europe