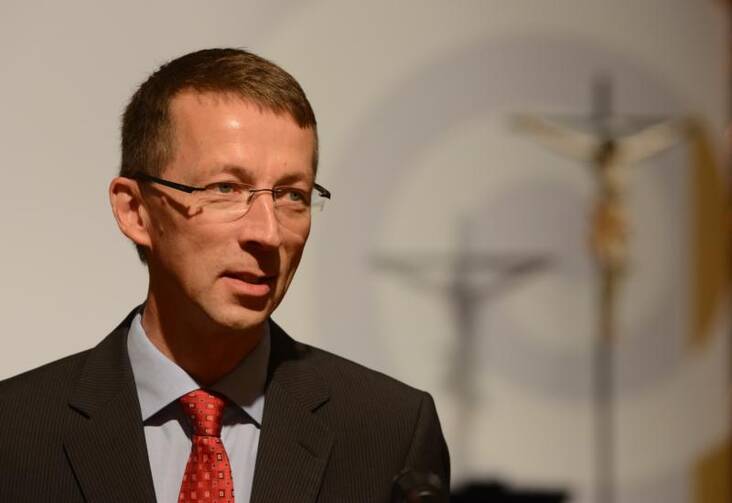 OXFORD, England (CNS) -- Germany's Catholic bishops are pressing ahead with a national reform consultation, or "synodal way," despite cautions from the Vatican and criticism from some bishops.

"At their spring assembly, the German bishops decided by common consent to follow the synodal way, and they've continued working toward this at their latest plenary in Fulda," said Matthias Kopp, spokesman for the Bonn-based bishops' conference.

Kopp spoke as documents were published from the bishops' Sept. 23-26 autumn plenary, clarifying plans for the two-year consultation, organized by the bishops' conference and lay-led Central Committee of German Catholics.

In an Oct. 1 interview with Catholic News Service, he said the initiative, to be launched Dec. 1, had been prompted by "loss of credibility" and "institutional failure" highlighted in a September 2018 church-commissioned report, which detailed the cases of more than 3,600 children sexually abused by Catholic clergy over six decades.

He added that the conference president, Cardinal Reinhard Marx, had "cleared everything up" during talks Sept. 19-20 with Pope Francis and Vatican officials, and said the bishops were convinced its findings could be "useful and instructive" for the church in other countries.

"You can see the synodal way as exemplifying a listening church -- the bishops want to concentrate on the questions believers are asking," Kopp said.

"The bishops' conference has verified the issues -- authority, participation, the separation of powers, sexual morality, the priestly life, women in church services and orders -- and wish to face these issues. A vast number of believers are waiting for this, and the bishops see it as their pastoral mission."

Addressing a Sept. 26 news conference, Cardinal Marx said the statutes, not yet published, had been approved "by a very large majority" of 65 bishops attending the Fulda plenary after lengthy debate.

"There are no stop signs from Rome, and we will therefore continue," the cardinal was quoted on the bishops' conference website.

"For some time, there has been a visible gap between the church's life and teaching -- even an extermination of the church. This is why we attach great importance to dialogue."

However, Cardinal Rainer Maria Woelki of Cologne said he had voted against the statutes after his own proposals to avoid questioning church teaching were rejected.

"I could not agree with the statutes in this form, although I do not wish to refuse the conversation," the 63-year-old cardinal said in a Sept. 26 twitter message.

"Let's try to renew the church together -- but it must be a renewal in faith, a renewal of our relationship with Christ."

Catholics make up 28.2 percent of Germany's population of 82.7 million, according to a 2018 church yearbook, although only one in 10 Catholics practice regularly, and formal departures from the church have increased sharply in the last two years.

In a June 29 message to German Catholics, Pope Francis pledged support for efforts "to respond with boldness to the present situation," but said the process should focus on faith and witness and avoid "a search for immediate results that generate quick and immediate consequences but are ephemeral."

In a Sept. 4 letter to the bishops' conference, Cardinal Marc Ouellet, prefect of the Vatican's Congregation for Bishops, included a critique of the proposed statutes, which said the German process probably should follow canon law procedures for a plenary council.

the church is dying in Germany. Benedict failed. The German people know a cover-up when they see one.

Revelation is ongoing, Jesus continues to invite and in order to proclaim the gospel with integrity, the Church has to know what the needs and concerns of the world really are. It seems important to engage in conversation about issues facing the local Church.

These bishops and lay groups are going to be discussing women being ordained priests and married clergy. It may be that the only way to make Catholicism act Christian is to indeed have Western Catholic Diocese, Bishops and all, jump off on their own and let Rome realize it needs them. We need justice in our church and that means all same sacraments made available to all who are called without regard to sex. This bias needs to end and Rome continues to elect popes whose model is misogyny above all else! It is not working and it is sinful and anti-gospel. Maybe, this will be a next step - each country decides do they want to break and hope later on there can be reunification when Rome decides to treat all people, including women, the same as they treat wealthy, Italian, Male Catholics.