Monks at Saint Anselm clash with college board over power

Monks at Saint Anselm clash with college board over power 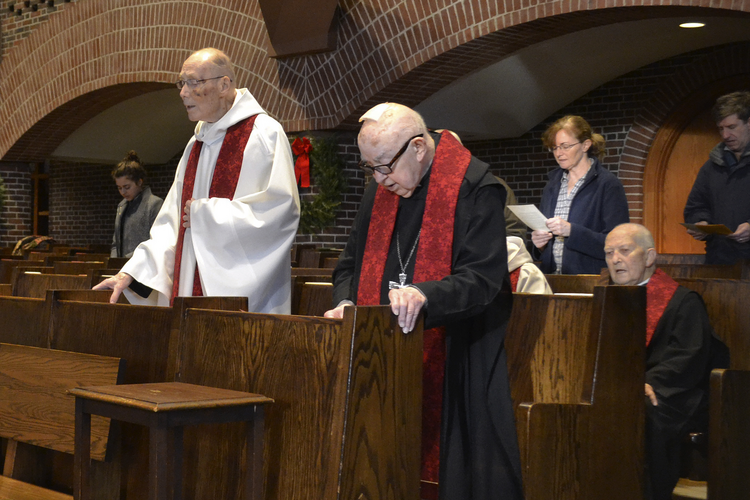 In this Dec. 26, 2019, photo, Benedictine monks of Saint Anselm Abbey celebrate mass in Manchester, New Hampshire. Monks at a Catholic college in New Hampshire have gone to court in a dispute with the school's board of trustees over an effort to limit their power. The two sides were in Hillsborough Superior Court on Monday, Jan. 6, 2020, over the lawsuit filed against the Saint Anselm College board last year. The unusual clash was set in motion when the board moved to take away the monks' ability to amend the school's bylaws. (AP Photo/Michael Casey).

MANCHESTER, N.H. (AP) — Monks at a Catholic college in New Hampshire faced off in court Monday against the school's board of trustees in a dispute over an effort to limit the the monks' power — a move some worry could lead to increased secularization.

A judge heard motions in Hillsborough Superior Court related to a lawsuit filed against the Saint Anselm College board last year. The unusual clash was set in motion when the board moved to take away the monks' ability to amend the school's bylaws.

Michael Tierney, representing the monks, said the school's charter dictated that they retain the power to amend laws governing the school. The school was set up and run by Benedictine monks for 130 years.

“I'm confident at the end of the day that the court will understand that the monk members maintain the amending power over the bylaws as they have since the legislative charter in 1889 and can maintain Saint Anselm College as the great Catholic and Benedictine institution it is and always will be,” Tierney said after the court hearing.

The board has argued that it has the authority under state law on nonprofit organizations to amend the bylaws. It argues the move is necessary to ensure it has the required independence for re-accreditation.

In a letter to the school community last month, Saint Anselm President Joseph Favazza took pains to suggest the board was not trying to change the mission of the school — as some monks have suggested. He said the move was about meeting the standards set by the accrediting body, the New England Commission of Higher Education and that the college was “fully committed to resolving the remaining governance issues.” “The Board of Trustees has made it clear that in no way do they wish to impede the fundamental role of the Catholic, Benedictine mission and traditions of the college,” he wrote.

For many students and alumni, the monks in their dark black habits are critical to the identity of the school. They pledge a “vow of stability” to live and work at the school their entire lives. They hold administrative posts, teach classes and form lifelong bonds with students that include officiating at weddings and baptisms.

Until 2009, much of the school's power was in the hands of the monks. But a reorganization that year created the 40-member Board of Trustees that included seven monks. It has the power to hire and fire a president, approve budgets and set spending priorities.

Meet the monks who brew the only Trappist beer in America
John W. Miller

The monks retained some power, including the ability to fire a president for violating Catholic teachings and amending the bylaws, which Abbot Mark Cooper said is critical to keeping future boards in check.

In a letter sent to the board in August, Cooper warned the proposal to take away the monks' ability to amend the bylaws risks “changing and secularizing the college from the great institution that it is today.”

“Our purpose ... is to offer the best expression of the Catholic tradition and Catholic faith that we can through the curriculum, through the social life and through everything we do there,” he said. “The easiest way or the most promising way in my mind to offer that is to have the amending power.”

Tierney said the arrangement by which the monks and the board share power at Saint Anselm is not unusual among religious schools nor is the debate over creeping secularization. In most cases, the concern revolves around whether a dwindling number of monks, priests or nuns can continue playing a central role at a school.

That is not the case at Saint Anselm. The 30 monks include several in their 20s and 30s, and the order has grown slightly in the past decade. These younger monks want assurances they will continue having a role long into the future.

“The Catholic identity of the school is not just preserved when we, with the Board of Trustees, makes pronouncements on large doctrinal matters or on cultural issues or whatever,” Brother Francis McCarty said. “Also our Catholic identity is preserved by our very presence living here and working in the college. There is an x factor that we bring and you can't really define it.”

It is unclear how the dispute will play out in court. But most observers, including the higher education commission, expect it to be resolved.

“Everybody agrees on the Catholic and Benedictine mission of the institution,” Barbara Brittingham, the president of the commission, said. “I do not see any threat to that.”

Show Comments ()
Comments are automatically closed two weeks after an article's initial publication. See our comments policy for more.
Provide feedback on this article
Join the conversation: Login or create an account
Before you can comment, you need to update your profile to include your first and last name, as required in our comments policy. Then reload this page and you'll be set up for commenting. Update your profile
Advertisement
More: Higher Education