Meet the researchers helping the Jesuits address their history of slaveholding 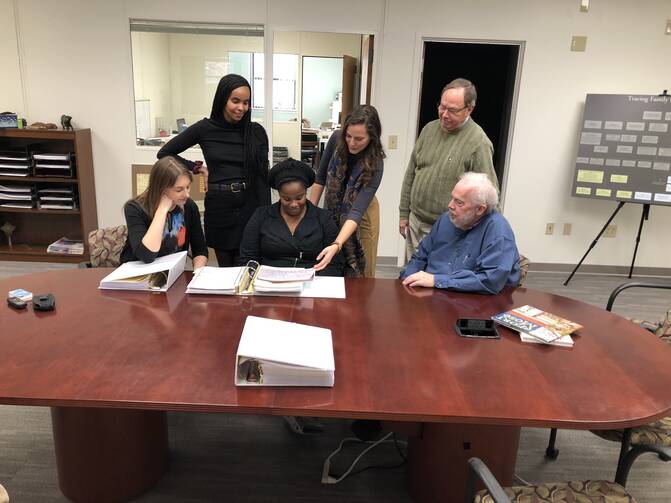 Laura Weis coordinates the Jesuits Slavery, History, Memory and Reconciliation Project on behalf of the Society of Jesus in the United States, working to build relationships with descendants, community members, researchers, Jesuit partners and others to identify the history and descendants of Jesuit-enslaved people in the 19th century United States. She holds a Ph.D. in Peace Studies and History from the University of Notre Dame. She previously worked in Washington, D.C., advocating for the prevention of violent conflict with the Friends Committee on National Legislation and the American Friends Service Committee. Dr. Weis is also an alumna of St. Louis University, where she earned a B.A. in history and sociology.

In addition to Dr. Weis, the project team currently includes co-director Jonathan Smith of St. Louis University, research coordinator Kelly Schmidt, researchers Jeff Harrison, S.J., Ayan Ali, Cicely Hunter and digitizer Mike Harter, S.J. Poring over hundreds of Jesuit records, baptisms, marriages and other records from Catholic parishes, they have accounted for at least 190 enslaved people owned, rented or borrowed in the territory of the current U.S. Central and Southern Province of the Society of Jesus between 1823 and 1865, successfully tracing a few of their genealogies. The team shares a passion for telling these stories in a way they hope will connect with descendants of enslaved people and also engage the descendants of slaveholders, including the current Society of Jesus. Eventually they hope to share digitized historical records in a public platform online, contributing to current discussions about the legacy of slavery in a way that makes the past relevant.

On Dec. 4, I sat down with Dr. Weis and the team at the SHMR office in St. Louis. Although we could not include everyone’s contributions to the conversation in this final article, Dr. Weis endeavored to represent them all faithfully in a sit-down interview, telling the story of their work as fully as possible. The following transcript of our conversation has been edited for style and length.

What inspired the Jesuits to establish an investigation into their own slaveholding practices in the 19th century?

Jesuits today know slaveholding is and was a sin. As our researcher Father Jeff Harrison has said, the Jesuits are now having an overdue conversation about slavery and its legacy. We want to do it in a way that’s intentional and really foregrounds the lives of enslaved people and not the people doing the enslaving. We want to uncover those stories.

Why should ordinary people care about the Jesuits Slavery, History, Memory and Reconciliation Project?

As we learn more and more about this history, we learn it’s not just a Jesuit story. While our focus is on the history and legacy of Jesuit slaveholding, what has become clear is the centrality of slaveholding in the history of the Catholic Church. It’s not just a Catholic story either; it’s a story about the founding of many cities, states and territories all across the country. Our work makes a contribution to that national conversation. Just as slavery was a totalizing institution, so too are its vestiges, and our contemporary lives are inextricably bound to this history.

As we learn more and more about this history, we learn it’s not just a Jesuit story.

What are the goals of this project?

From the beginning, the project leaders identified three interrelated goals, all of which are ongoing and not necessarily linear. The first is to research the history of Jesuit slaveholding with an intentional focus on the lived experiences of enslaved people, tracing their family lineages with the hope of identifying their descendants. The second goal is to share their ancestors’ stories with living descendants of the enslaved and invite them into a conversation with Jesuits today about how to address this history and its legacy. The third goal is to address the healing question of “Where do we go from here?” We are committed to the transformative process of telling the truth about that history in conversation with descendant communities today.

What have you learned since establishing the project?

Our researchers like to emphasize that when the project started, we only had six names—and only first names—of enslaved people forced to come with Jesuits from Maryland to Missouri in 1823. What we’ve learned since then, through the work of this team of researchers, has included their full names, where they lived, the conditions where they lived, the relationships they built, the ways they tried to protect their families, and so on. The project speaks to the importance of telling those stories, and one of the most wonderful things we’ve learned is that it’s possible to do that. There was some doubt in the beginning that we’d even find anything. Now we’ve identified at least 190 enslaved people owned, rented or borrowed by Jesuits in the central and southern United States between 1823 and 1865.

The words slavery, history and even memory in your project title seem self-explanatory. But what does reconciliation mean?

Father Jeff Harrison has said it’s a word that means confessing sin and expressing remorse for the grave sin of slavery, from a Jesuit and Catholic perspective, but it also acknowledges the ongoing legacy of slavery in racial inequalities which persist today. At the same time, any conversation about what reconciliation means or looks like has to take place with descendants of enslaved people. Our approach from the project perspective is to facilitate conversation with descendants and descendent communities. Our job is to listen. Enslaved people led vibrant lives, but their voices were disregarded, unheard and suppressed. The Jesuits are now open to—and not anticipating—what the response will be; it’s a conversation that has to take place with descendants.

We’ve identified at least 190 enslaved people owned, rented or borrowed by Jesuits in the central and southern United States between 1823 and 1865.

Your project has already identified and contacted the descendants of a family held in slavery by Jesuits in Missouri. How has that conversation gone so far?

It’s been different from person to person in the family. But it’s been wonderful to share the stories of their ancestors and facilitate a connection to that. We don’t expect a monolithic response from people to learning this information.

Georgetown University has launched its own investigation into its Jesuit slaveholding practices, an investigation in which you’ve collaborated, and it has even pledged to give preferential enrollment to descendants of slaves held there. What is your attitude toward reparations as a possible outcome of your own project?

It’s important to say any discussion about an outcome to this process cannot be undertaken unilaterally. We have to let the process and conversations with descendants unfold naturally. Much like Georgetown University, St. Louis University has established a working group to discuss what to do in conversation with the descendants of enslaved people held on campus as part of the healing process.

Our approach from the project perspective is to facilitate conversation with descendants and descendent communities. Our job is to listen.

What gifts have you brought from your academic background to the project coordinator role?

I’m not the most obvious person on paper for this job. Kelly is a historian of slavery, Cicely is studying African-American experience in the early 20th century. But my academic background in history and peace studies did teach me about the important role of narrative and storytelling in healing. In a lot of ways, the work we’re doing hopefully weaves another story together from all of these disparate parts, which we can’t segment into past and present.

You’ve mentioned that your team includes Jesuit Father Jeff Harrison and research coordinator Kelly Schmidt among others; they’ve spent a lot of time digging into the U.S. Jesuit archives in St. Louis and collecting Catholic records from around the country of Jesuit-held slaves. Can you say a little about this work of finding historical documents?

Our work started at the U.S. Jesuit archives here. There wasn’t a single box labeled “slavery,” so there wasn’t an obvious starting point. Kelly, Jeff, Ayan Ali, Cicely and others have had to piece together the research from all kinds of archives. We’ve gone into archdiocesan archives, parish records, city records, state records and other places to get a full and rich understanding of people’s lived experiences. We’ve begun to put together binders with the families’ histories to share with descendants, and we hope to digitize historical records to make them available and accessible online in the long term.

A practical guide to discernment (Hint: just be yourself)
Sean Salai

If you could say one thing to Pope Francis about Jesuit slaveholding, what would it be?

First, I’d want to thank him for his attention to social justice. Then I’d want to highlight that the legacy of slavery is an inextricable part of our contemporary lives as Americans and we have a responsibility to do this work. This is a project of the Jesuit Conference, a work of the United States, but slavery was a global issue. The Catholic Church has to grapple with this history.

The Catholic Church has to grapple with this history.

I hope we can continue to connect with descendants and that the project continues to embody the goal of endeavoring to hear all voices. This work is a process that’s going to take a very long time; it’s not a one-and-done conversation, but rather an ongoing work of research and relationship building. It’s a relational process and we’ve been cognizant from the beginning about the need to work in partnership, as we’re doing here in collaboration with St. Louis University and the Jesuits.

Correction, Jan. 7: The researchers interviewed for this article have identified “at least 190 enslaved people owned, rented or borrowed by Jesuits in the central and southern United States between 1823 and 1865." The original article stated they had identified "at least 190 descendants of slaves.”