Mideast Catholic patriarchs pray for those suffering, appeal for dialogue 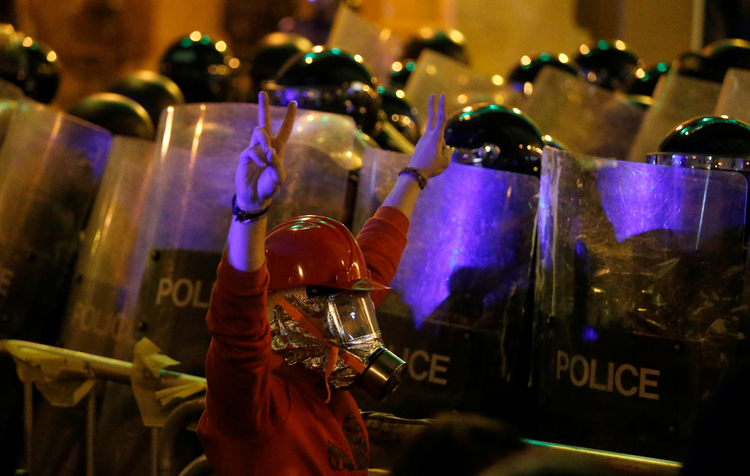 BEIRUT (CNS) -- Against a backdrop of anti-government protests in Iraq and Lebanon, at Christmas, Catholic patriarchs in the Middle East spoke of the continued suffering.

From Baghdad, Cardinal Louis Sako, patriarch of Chaldean Catholics, called it "very sad" that Christmas comes "in such painful circumstances."

"The wounds of the Islamic State have not been healed yet, together with the ongoing violence, poverty, unemployment and poor services that have pushed thousands of people, especially youth, to demonstrate peacefully, demanding the right to live with dignity and freedom in a stable, secure and strong independent homeland," he said of anti-government protests that began Oct. 1.

"Since 2003, this dream has not been realized, and our hearts are still full of sorrow and anxiety for the large number of casualties and thousands of injured Iraqis."

The Chaldean Patriarchate canceled all evening Masses Dec. 24 in Baghdad due to security concerns, and there were no Christmas decorations in honor of those who died and were injured in protests.

"It is unfortunate that Iraqis are unable to find an effective way to put the country on the right track, eliminate sectarianism, corruption, illegal enrichment, and the unfair seizing of public and private properties, despite the numerous appeals from inside and outside Iraq," Cardinal Sako said.

He appealed for a "rescue initiative" involving "courageous dialogue" to achieve a comprehensive national project to save the country.

Cardinal Bechara Rai, Maronite patriarch, pointed to the corruption that has plagued Lebanon and to the country's rapidly deteriorating economic crisis.

"Our tragedies have come from the fact that our rulers have refused to transfer power for decades," he said in his Christmas message from Bkerke, the patriarchal seat north of Beirut. He said the rulers seized power, looted money and accumulated debts of all kinds.

"They brought the state to an economic and financial collapse," throwing more than a third of the Lebanese people into poverty and 35 percent of university graduates into unemployment, as well as prompting businesses and educational institutions to close.

At Christmas, Cardinal Rai said, the Lebanese people are waiting for the gift of a new government that includes professionals of "integrity and competence" to set the country "on the path of economic, financial, and social salvation."

He referred to the largely peaceful massive uprising that began Oct. 17 as "a sign of shining hope in the darkness."

"The people, young and old, have expressed what they are suffering from, and the reforms required, in a positive revolution," Cardinal Rai said, adding that "we hope it will remain so and not become a destructive negative revolution."

From the patriarchate in Beirut, Syriac Catholic Patriarch Ignace Joseph III Younan said in his Christmas message, "If we consider the alarming situation in our region, the wars, chaos, persecutions and oppressions that spread in many countries, we realize how much our world needs Christmas in this climate of hatred and violence."

Like Cardinal Rai, Patriarch Younan addressed the demonstrations in Lebanon, noting that protesters are demanding a democratic civil government that would respect the rights of all citizens, "fight against tribalism and confessionalism as well as against any external interference that divides the population." He stressed that the popular uprising calls for a system of state institutions that holds those responsible accountable to the law.

Patriarch Younan urged high-ranking officials to listen to the demands of the people and "to form a government of specialized ministers who are not hostage to political and sectarian parties and leaders."

Turning to Syria, Patriarch Younan said, "We keep hoping that the efforts made by people of goodwill (will) be able to overcome the horrible violent conflict that continues to destroy such a beautiful country known in the past to be a cradle of civilization."

He repeated his call to the international community to lift "the unjust economic sanctions that only harm the innocent people."

"We urge them to stop fomenting hatred and sectarianism in the name of exporting an illusion democracy in the region," he added.