How a ‘green’ church in Toronto teaches theology through design 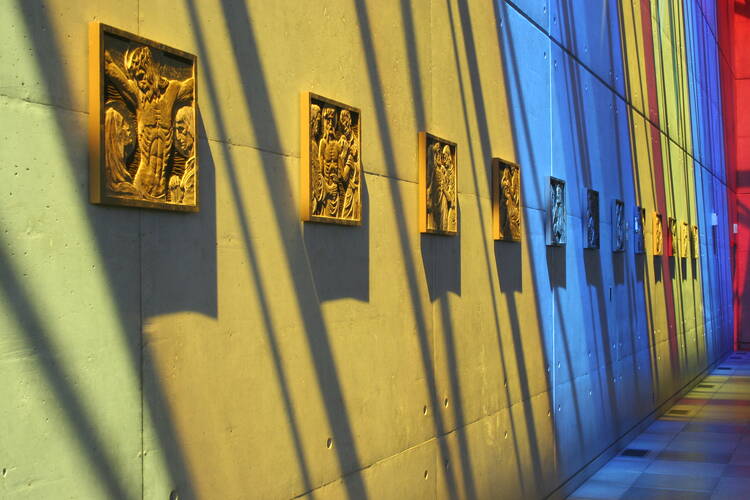 “You’re just catching the tail end of the light show,” said the architect Roberto Chiotti a little after 1 p.m., showing off the sanctuary of St. Gabriel’s Passionist Parish in Toronto, the church he designed with Larkin Architect Ltd. in the early 2000s. Around noon, the sun cascades through colored-glass skylights, bathing otherwise blank concrete walls in a wash of dazzling hues as the congregation gathers for Mass. The colors creep up one wall, reach an apex, and then creep back down the other side, fading away until about 4 p.m., when the sun enters the church at an oblique angle to highlight a crucifix in bold reds and blues for the sacrament of reconciliation.

“[At first] I was afraid it would be like a discotheque, with shooting lights and lasers,” Mr. Chiotti said of the design, which he tested using white boxes and pieces of glass in parks. “I hadn’t conceived that it would represent cosmic time, because the light moves at the rate of the earth turning on its axis.”

St. Gabriel’s was the first church in Canada to be certified by the Leadership in Energy and Environmental Design, or L.E.E.D., rating system. From its floor plan to its building materials to its parishioner programs, St. Gabriel’s has embodied a Catholic vision of ecology since its consecration in 2006, nearly a decade before Pope Francis published “Laudato Si’”in 2015.

When their aging church in Toronto presented a host of financial and maintenance burdens at the turn of the millennium, the Passionists decided to start fresh. Passionists in Canada were interested in the teachings of the U.S. Passionist priest Thomas Berry, C.P., a towering figure in the development of ecotheology even after his death in 2009, and the prospect of designing a new building suggested a unique opportunity to express the cosmic vision of Father Berry beyond texts and lectures.

Mr. Chiotti had studied the work of Father Berry at St. Michael’s College in Toronto under Father Stephen Dunn, C.P., a Passionist and long-time member of St. Gabriel’s parish, and he was keen to take on the project.

“First you say, ‘Isn’t that beautiful on the wall?’ But the lesson is there. We keep inviting the sun into each of our liturgies one way or another.”

The Passionists’ mandate was to make Father Berry’s ideas tangible. “When we asked Thomas Berry, ‘How do we do that?’” said Mr. Chiotti, “he responded with a question instead of an answer: ‘How will you address the sun?’ Because we’re solar beings.”

The sun’s rays of color during the Mass is aesthetically moving, but Father Dunn said that for him, the primary purpose of the windows is catechesis. “It’s a long tradition in churches that the windows tell the story of salvation history. You get to know your saints, all that sort of thing.” Some of the stained-glass images of saints from the old church were salvaged and recycled in the new building, no longer high above churchgoers but now face-to-face with them.

The catechesis of the windows in the nave, however, speaks to transformation, illumination and salvation history on a cosmic scale. “The windows are blank until the sun changes them,” said Father Dunn. “That is the essential cosmological link. It’s something that you grow into. First you say, ‘Isn’t that beautiful on the wall?’ But the lesson is there. We keep inviting the sun into each of our liturgies one way or another.”

When the sun no longer shines through the colored filters above, it still washes the nave in light through the massive wall of windows that faces south, giving the congregation full view of a garden maintained by parishioners. “It just so happens that the garden is the same size as the worship space, so the templum of the sacred space is projected out into creation,” said Mr. Chiotti.

The baptismal font also faces the windows “to remind us that when we’re baptized into the Christian community, we’re also accepted into the earth community,” said Mr. Chiotti. Along with the sun, water is a primary theme of the architecture. A constructed wetland near the garden, also visible from inside the church, is fed by rainwater collected on the roof that empties like a waterfall into a stony basin surrounded by lush foliage. When rain is scarce, however, the plant life dies off.

“Not only is water a primary symbol in our initiation rite as Christians,” said Mr. Chiotti, “but it’s also absolutely essential to life. Christ spoke about living water, so [the wetland] puts us in touch with the preciousness of water, and how water is meant to bring new life. But if we pollute it or don’t respect it, or misuse it, it will bring death.”

Even the air that parishioners breathe is a reminder of human dependence on creation. A living wall made up of plants inside the building captures carbon released from clothing and shoes, and it returns clean air in its place. Plants dehumidify the air in the summer and humidify it in the winter. At every turn, St. Gabriel’s tries to encourage those who walk through it to see themselves as intimately tied into creation.

At every turn, St. Gabriel’s tries to encourage those who walk through it to see themselves as intimately tied into creation.

As a Passionist parish, St. Gabriel’s also testifies to the charism of the order that maintains it. Dating back to 1747, the Passionists devote their lives to the suffering of Jesus and the meaning of the cross in the world.

“The passion of the earth is always the passion of Christ himself,” said Father Brando Recaña, C.P., pastor of St. Gabriel’s. “When we’re gone, the earth will still be here. Whatever we do to Mother Nature always comes back to us.” Although ecological problems are grave, Father Recaña says the youth of his parish give him hope as they learn a deeper relationship with God and creation through gardening and caring for justice.

In the garden, as part of the catechesis of St. Gabriel’s, there is a series of plaques that function as “stations of our cosmic earth,” telling the story of the universe, or what Thomas Berry called “cosmogenesis,” with stations like “the flaring forth of the universe” and “the rise of the flowers.”

What would a chapel on the moon look like? Catholics in the ’60s had some ideas.
James T. Keane

“As people of faith, we’re celebrating the transformative moments in the story of the universe,” said Mr. Chiotti, drawing from Father Berry. “If the universe story was written in 30 volumes, humans would appear on the last sentence of the last page, and Christ would appear in the period of the last sentence. So somehow we’re missing a sense of the cosmic Christ, or the 30 volumes prior to the incarnation of Christ. He had to have been here all this time from the beginning, if we believe in God’s presence as part of our universal truth and reality.”

Mr. Chiotti continues to think ecologically as he designs and updates other sacred spaces. “My hope had been that every church I designed after this one would be like this,” he says. That has not happened, but since “Laudato Si’”he has noticed a difference in how congregations think about construction. For example, a church he is currently working on in Milton, Ontario (Saint Benedict), will be net-zero in its energy consumption, built with sustainable materials available nearby and efficiently insulated.

“From up in the stars, the cosmos, you could look down and see we’re crucifying the earth. But there’s hope that resurrection, [and] a new understanding, will bring about a viable human future,” said Mr. Chiotti. If human beings can form better relationships with each other and the planet, perhaps, St. Gabriel’s Parish suggests, we might even become more than one sentence at the end of the universe story.

Do I detect another feeler by the Jesuits to normalise the crackpot ideas of Jesuit Pierre Teilhard de Chardin?

Genesis, Job and the psalms are quite enough information about the creator and His creation.
God the Son is not in time so much as time is part of what he has created and then briefly entered mysteriously for the purpose stated in the New Testament.

The Kingdom of God might have come near to us, but it was pre-existent and we play no part in producing it, we become part of it when we are totally existing as a creature conformed to the effective will of God.

As for capturing sunlight for stimulating religious sentiments within your worship building by copying Stonehenge in Ancient Britain or the pyramids in Ancient Egypt, great originality.

As for boasting about the virtue of following one of the biggest hoaxes in history, nuts!

As a tradituionslist you might appreciate the fact that in the Middle Ages/Renaissance this was a widely held belief among catholics, which only disappeared with the Protestant reformation: there are three scriptures throufgh whicjh God communicates to the world, the Holy Scriptures/the Bible; nature; and the ancient works of great literature (human nature). St. Francis's Canticle of the Sun, hardly derivative of deChardin, was composed in a Catholic culture that looked on creation this way.

Are you a baptist, or Calvinist, or Puritan/Iconoclast determined to strip beauty from churches?

Well, Google them and go have a look at the building, not the very preciously selected pics America editors are including. The place has all the beauty and charm of the meeting rooms at the Hyatt, no, let me take that back, the Hyatt attempts to hide their sound and light equipment, although I will say that one aspect, the broad stained glass bath of light, is pretty well done.... but other than that, terrifically 'meh.'

An article which says, this church is beautiful would have been welcome.
An article which expounds New Age drivel identifiable as in the same realm as de Chardin unwelcome; the nasty trick of subversion of our love of beauty to hook us into that nonsense is not.

what a great image--we are the last sentence on the last page of the book of the universe---hope the book does not close with a bang! Boy, does that make you feel humble and insignificant.