Will affordable housing be a major topic in the 2020 campaign? It should. 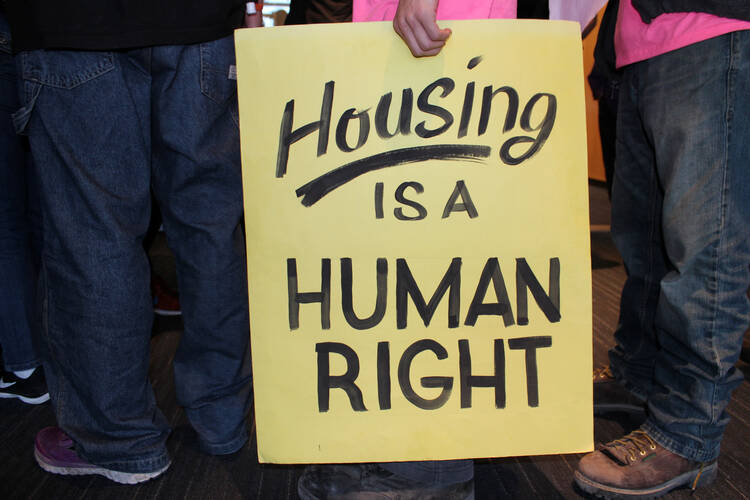 Protesters hold placards during a May 14, 2018, Seattle City Council vote for a new "head tax" on the city's biggest companies, including Amazon.com, as a way of fighting a housing crisis due rising real estate costs. Escalating housing costs were a hot topic at a Feb. 2, 2019, workshop on the opening day of the Catholic Social Ministry Gathering in Washington. (CNS photo/Gregory Scruggs, Reuters)

On June 12, about 1,400 protesters gathered outside the residence of Mayor Bill de Blasio of New York, demanding that he fulfill his campaign promise to build more senior housing. The protest drew people of all ages, perhaps because younger residents are looking out for their own future, perhaps because of a growing recognition that the affordable housing shortage is a threat to all.

That threat may turn housing policy into a major topic in the 2020 presidential campaign, challenging the view that the provision of homes is a concern only of local government. In particular, the Democratic candidates Cory Booker, Julián Castro, Kamala Harris and Elizabeth Warren offer a variety of plans that include direct benefits to families (like tax credits for renters and assistance programs for homebuyers) but also financial incentives for communities that build, or at least allow, new housing.

That threat may turn housing policy into a major topic in the 2020 presidential campaign, challenging the view that the provision of homes is a concern only of local government.

Young adults and families with young children have long been frustrated searching for affordable homes near job opportunities. The National Low Income Housing Coalition reported in June that a worker earning the federal minimum hourly wage of $7.25 would have to work 127 hours a week to live in a two-bedroom home with a rent at the national average. In most places, buying a first home is even farther out of reach. The protest in New York City suggests that older Americans—a powerful voting bloc—are also becoming dissatisfied with their limited options. Some seek alternatives that are more manageable than family-size houses but less costly than assisted-living facilities, including trailer-size homes on small lots, “in-law” apartments added to existing houses and apartment buildings near public transit.

The trouble is that many communities make it very difficult to add such housing. Seniors, especially those who live alone, face the same resistance as recent college graduates in an economic and political environment that still promotes the costly option of a single-family home with a front lawn and two-car garage.

Housing production has long been steered toward sprawling suburbs, thanks to the lower costs of building on vacant land, spending priorities for infrastructure (new highways as opposed to public transit) and tax policies that favor homeowners over renters. Zoning laws also limit huge portions of metropolitan areas to detached single-family housing. As The New York Times recently reported, it is illegal on at least 75 percent of the residential land in many large American cities to build anything other than single-family dwellings. These policies have benefited a large number of baby boomers, who were able to buy homes before prices skyrocketed and who, in many places, enjoy property tax advantages that encourage them to stay in large houses even after their children have gone (see Proposition 13 in California).

It is illegal on at least 75 percent of the residential land in many large American cities to build anything other than single-family dwellings.

The Obama administration made tentative steps toward encouraging more flexible housing production by offering incentives for zoning reform and transit-oriented construction, but a more comprehensive federal policy is needed as demographic changes make the suburban-sprawl, single-family model of housing less useful. According to census data released in late June, the nation’s over-65 population increased 30 percent between 2010 and 2018. During the same period, the population under age 18 decreased by 1.1 percent.

This is not to say that the principle of subsidiarity should be abandoned in housing policy. Local governments and community groups must be a part of the conversation to determine whether specific housing projects are appropriate for towns and neighborhoods. But rigid zoning laws that prohibit multi-unit housing or that mandate large lot sizes can be exclusionary and insensitive to the needs of fellow citizens in a metropolitan area.

Housing is as much a part of the common good as health care and education. It is encouraging that the national conversation is beginning to recognize this.

it would be hard to pick out a more important topic for political consideration than housing. There are so many aspects to it. Attaining and maintaining a policy objective that is politically satisfactory tests all of our economic and moral convictions. And formulating strategies that incorporate workable alliances among business and government entities that is free from self-serving stratagems has proven to be a rare accomplishment.

Housing situations fluctuate cyclically between satisfactory and unsatisfactory and from region to region in ways that are partially predictable, but with a large measure of unpredictability as well. It is possible, for example, to predict a coming housing shortage, whether due to unaffordability or some trending geopolitical development, when the causal factors first start to show up in statistics. On the other hand, fluctuations caused by natural disasters or political malfeasance usually are less possible to predict.

Whether the upcoming elections will afford voters a chance to express a clear choice regarding housing policy is, in my opinion, currently not knowable.

On another article recently it said “health care is a human right.” Three questions: What level of each is a human right? When did they become a human right? Are there any other human rights? A famous document said life, liberty and the pursuit of happiness are inalienable rights. Part of my education said food, clothing and shelter were the basis necessities of life through the ages.