When you take a Jesuit to the Democratic debate 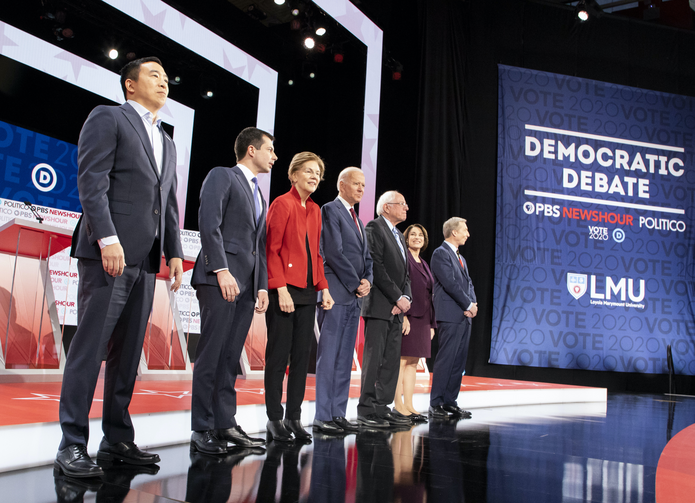 Last week the Jesuit community of Loyola Marymount University, where I live, was informed that no one would be able to enter or leave campus on Dec. 19 without a special placard. The Democratic National Committee was holding its final presidential debate of 2019 on L.M.U.’s Los Angeles campus, and security concerns meant that for 24 hours almost no one was being let in or out.

“That isn’t going to work for me,” someone “reply-alled” to the university official who informed us. (If you really want to wind Jesuits up, tell us we can’t do something.)

“Me neither,” I chimed in, a troublemaker to the end. “It’s sad to say, but I think the Democrats are going to have to go elsewhere. I apologize for their inconvenience.”

In fact, despite weeks of planning and what seemed like a full-press mobilization of the entire campus community, the Democratic debate almost did have to go elsewhere. For months L.MU.’s unionized food service workers had been fighting for improvements in their new contract with the Sodexo Group, the international conglomerate subcontracted by L.M.U. to manage its university-wide food service.

“The cost of housing in Los Angeles is at more than a crisis point, and wages at L.M.U. were low,” explained Kurt Petersen, the co-president of Local 11, the union representing the food service workers. “We wanted to increase wages by a dollar or more an hour.”

Being courtside at a presidential candidate debate sounds thrilling, but it turns out that you don’t get a great view. While I can see Biden’s head, I cannot see the body to which it is attached, and from my angle Senator Elizabeth Warren is just a left arm.

The university itself had stayed out of the conflict, citing this as an issue between Sodexo and its employees. But once presidential candidates began tweeting that they were not going to cross a union picket line, both university officials and Tom Perez, the chairman of the National Democratic Committee, swooped in, and matters were quickly resolved.

Mr. Petersen would have preferred that the contract had been concluded on moral merit alone before the debates; “Catholic social teaching doesn’t distinguish between contractors and subcontractors. It’s squarely on the shoulders of university to do right by these employees.

“But sometimes God moves in mysterious ways,” he said.

On the morning of the debate the campus is empty to the point of apparent abandonment. Has everyone been Raptured but the Jesuits?I wonder. The Dominicans are going to have a field day with this.

At the entrance to campus, though, I discover we’re not alone. A dozen Elizabeth Warren supporters wave signs at cars driving by. There’s a great can-do merriness about them; they look like the kind of people you can always count on to show up for the neighborhood clean-up day or the PTA bake sale. Who’s got the hot chocolate?

Hours later inside the university’s 4,200-seat basketball arena, I’m thinking about drinking something far stronger as we sit cheek by jowl in our Sunday finest, waiting two hours for the seven Democratic candidates to arrive. I’m directed to a seat among donors and local luminaries just 30 feet from the stage. Wearing the fraying suit coat I took vows in 25 years ago, I feel not for the first time in my Jesuit life that I might not belong here.

That’s when the lady behind me says, “Father, if you’re gonna sit here, you better be rooting for the Democrats. No ‘Make America Great Again’ hats allowed. I’m from Boston; we don’t play.” It really is true; the Lord helps us find our people.

The real surprise of the night for me is Amy Klobuchar. She looks a little bit like Tina Fey, and she works this SoCal audience like a pro

I’m sitting so close I could just about play a game of catch with America’s Dad, former Vice President Joe Biden. It’s eye-opening to be able to watch the candidates when they’re not on camera. While most are oddly raising their hands, desperate for teacher to call on them, whenever Biden stops talking he seems to enter C-3P0 sleep mode. The man barely moves. Meanwhile, Senator Bernie Sanders looks like he has to force himself to keep from pacing behind the other candidates. Andrew Yang often stares dreamily into space, imagining himself, I guess, in a more interesting world.

Being courtside at a presidential candidate debate sounds thrilling, but it turns out that you don’t get a great view of all the candidates. While I can see Biden’s head, I cannot see the body to which it is attached, and from my angle Senator Elizabeth Warren is just a left arm. Worse, Mayor Pete Buttigieg is a haunting disembodied voice.

And yet, the longer I sit here, I discover when you can’t view much, you can actually see a lot. Warren’s left arm shoots up at the weirdest moments, like when Yang mentions he has a child with special needs. What could she possibly want to add to that? Meanwhile, Buttigieg’s voice has a sing-song preacher’s cadence, constantly trying to reassure us that he knows what he’s doing.

Slowly my experience of the event morphs into something less CNN video horizontal and more like a parade of Doonesbury panels.

Our next question is for Senator Sanders. How do you feel about our upcoming war with China?
Elizabeth Warren’s left hand has got a plan for that.
Joe Biden’s head is currently charging.
Andrew Yang is thinkin’ about getting a motorcycle, y’all.

Mayor Buttigieg, which communities will you evacuate first because of climate change?
Pete Buttigieg’s disembodied voice would like you to know that he is serious and competent.
Elizabeth Warren’s left hand has the right answer.
Joe Biden’s head is currently charging.
Amy Klobuchar heard this great quote.
Elizabeth Warren’s left hand has a quote too.
Bernie Sanders is waiting to speak.

Corruption and cruelty don’t seem to motivate voters’ choices right now, and big ideas tend to scare off the voters candidates need to get elected.

'Andrew Yang, why should we change leaders when the economy is doing really well for everybody?
Tom Steyer is here.
Elizabeth Warren’s left hand is here as well, thank you.
Amy Klobuchar has a great story about that.
Andrew Yang just did a space jump on his motorcycle from the International Space Station, hell to the yeah!
Joe Biden’s head is currently charging.

The real surprise of the night for me is Amy Klobuchar. She looks a little bit like Tina Fey, and she works this SoCal audience like a pro, maybe better than anyone tonight. Yet she’s constantly peppering in little references to the Midwest that no one here will understand, like an ultra-niché joke about Wind Cave National Park in South Dakota. (If she’d mentioned Carhenge she’d have gotten free water for life from Wall Drug.)

When she notes that the Midwest “is not a flyover state, it’s where I’m from,” you can hear her almost lose the California room for a moment. But it’s a genius move; the comment wasn’t for us but for everyone watching who doesn’t live on a coast, and did they love it? You betcha.

Speaking as someone raised in the Midwest myself, I can confirm that her beef with Buttigieg is also about as Midwestern a fight as you will ever see. People like to say Midwesterners are so nice, and they’re right. We call it “having manners.”

But the secret to that genial composure is that, like the Hulk, we’re also always angry—did you think we actually enjoy all your “Fargo” quips? Two Midwesterners triggering each other is like hornets in a glass jar; don’t open that lid!

None of the candidates is ever asked a question that touches on faith—PBS, supported by non-religious viewers like you. The closest we come is anchor Judy Woodruff bizarrely acknowledging Christmas as the debate concludes and asking the candidates if there’s anything for which they want forgiveness. (That’s more Lent than Christmas, Judy.)

No one on stage mentions the just concluded British elections either, and as I walk home I wonder if that isn’t the far more worrying omission. Democrats like to believe that no one in their right mind could possibly vote for Donald J. Trump, knowing what we now know about him. And yet in Great Britain (and Australia before it), the electorate, confronted by an incumbent government with a history of dishonesty, disorganization and xenophobia, still voted it back into power rather than elect a leader they could not somehow personally relate to.

Corruption and cruelty don’t seem to motivate voters’ choices right now, and big ideas tend to scare off the voters candidates need to get elected. I don’t like it any more than you do, Elizabeth Warren’s left hand, but people appear likely to vote against their own best interests if they can’t see a way to like you.

And that’s going to take more than hand waving and mature-sounding voices.