Watching the Democratic debate with my students at Loyola Marymount

Watching the Democratic debate with my students at Loyola Marymount 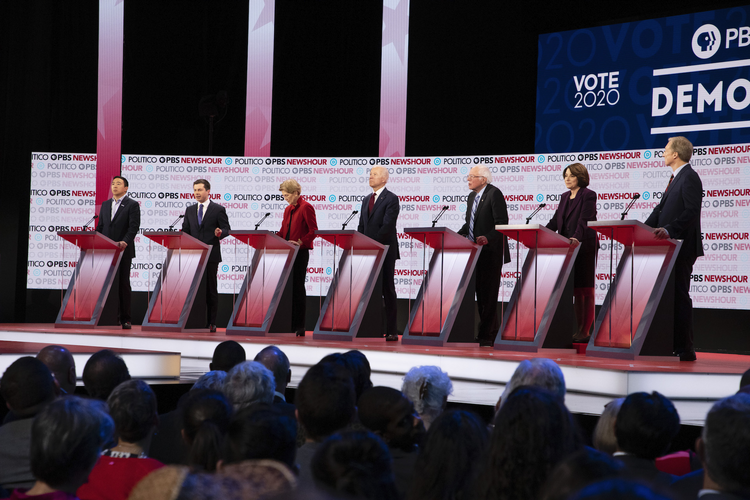 It is late and very cold by California standards when we finally finish our conversation at a tiny Mexican restaurant two blocks from the Loyola Marymount University campus. The students with me had just realized that over the last two months they had gone through extraordinary experiences that most people around the world couldn’t even imagine.In November, they had been delegates to the Ignatian Family Teach-In for Justice outside Washington, D.C., and visited Capitol Hill to advocate for climate policy and immigration. Tonight, there they were in the audience at the sixth debate of the Democratic primary season, hosted by PBS NewsHour and Politico.

Packed tight in what is normally our university’s basketball stadium, these accomplished student leaders were part of the community listening to seven candidates for the presidency of the United States. Sitting in L.M.U.’s Gersten Pavilion with California’s governor, the mayor of Los Angeles and many other leaders, there was something truly inspiring about the presence of these undocumented students at a moment that could very well determine their place in this country.

There was something truly inspiring about the presence of these undocumented students at a moment that could very well determine their place in this country.

The planning for the debate had begun less than a month before when, quite unexpectedly, the university announced our campus would be the site of the December debate. As I ran into a conference room with a hastily assembled cast of faculty and staff, we wondered aloud how to prepare in three weeks for something other universities had organized with a year’s advance notice. We had to be creative, check our bandwidth to see how much we could each handle and then go for it. So, after the debate, as we munched on nachos I asked the students, was it worth it? What do you think?

One young woman reflected on how amazing it was for students to be engaged in the debate, to be able “to be part of something that felt almost surreal.” She had watched the earlier debates on television, but here it was: “Tonight there were the candidates, there was the audience, I was one of them, and it was all real.”

Would they tell me about their experience of the debate? What had they learned and felt? As we settled into conversation, several themes emerged.

Would they tell me about their experience of the debate? What had they learned and felt?

The issue of trust. I noted the students’ honest desire to trust the feelings and passions being expressed on the debate stage. Elizabeth Warren’s closing words, as her voice appeared to break recounting a family’s inability to pay for their prescriptions, was fresh in their ears. They wanted to believe her, they really did, but they expressed reticence. “It is so hard to trust what anyone says because we feel politicians are lying all the time,” one student remarked. One young man reminisced about how that was not always the case; he remembered believing the truthfulness of Barack Obama’s tears. His eyes wide, he pounded on his heart recalling that trust. “But now, it feels like there’s just so much lying everywhere, how can we believe anyone?” The table fell silent. These are the heartbreaking signs of our times.

The urgency of concerns.One of the students had been hard at work with the L.M.U. Center for the Study of Los Angeles, which had sent them out during the previous week to conduct interviews around the city. “We were talking to people in hard hats at construction sites, to security guards, just regular working people, and there were two things that really concerned them: immigration and homelessness,” he recalled. I could see the wonderment in his eyes as he reflected on how these were “people with jobs, who didn’t need to care about the people living on the streets, but they did. They cared about them.” Did we hear much about these issues in the debate, I asked? No, was the consensus. “Senator Bernie Sanders did bring up homelessness,” one student said appreciatively, “but that was about it.”

What about immigration? We looked around the table, this was the most urgent issue in their own lives.

What about immigration? We looked around the table, this was the most urgent issue in their own lives. One of the students thought perhaps the question that had been asked about the Deferred Action for Childhood Arrivals program—an Obama-administration policy for undocumented immigrants who came to the United States as children—was the one sent in by him and mistakenly attributed to a professor. A DACA recipient, he mused that “there wasn’t much of an answer.” The candidates did not seem to realize that in June the Supreme Court will likely rule with the Trump administration and declare DACA rescinded. “These candidates were in California, they were on a Jesuit campus that educates undocumented students, could they have said more, given us some hope?” the student asked.

And then there was the issue of race. Andrew Yang was the only person of color on the stage, and they appreciated his presence, but “why did he have to reduce everything to economics? These issues are much more complicated than that,” one student remarked. All agreed.

One more thing was on their minds as young people: “What about gun legislation and gun violence?”

One more thing was on their minds as young people: “What about gun legislation and gun violence?” “Why wasn’t there even one question about that?” There was a sadness in their eyes that I have seen in young faces more and more. The youngest candidate, Pete Buttigieg, alluded to it when he spoke about not giving in to “the helplessness” and “cynicism.” I see this sadness in his eyes, too, when he speaks about hearing politicians talk about the same problems “for as long as [he’s] been alive.” My generation has failed this generation. I feel the weight of their sadness.

The rest of the world. The students noted how some of the candidates spoke expansively, acknowledging that what the United States does has an outsized influence on the rest of the world. They appreciated Joe Biden’s reminders about not just participating but leading on climate change measures. At the same time, they worried that some of the candidates may not have the necessary experience to deal effectively with international problems.

The qualities of leadership.These young people also zeroed in on some of the qualities that they think we need in our next president. They remarked on the intelligence of some of the candidates, especially Elizabeth Warren, Amy Klobuchar and Pete Buttigieg, while also noticing somewhat bemusedly how Joe Biden seems “so much like a dad, so lighthearted, and then suddenly you realize, he really does know what he’s talking about!” They are looking for someone who is capable, who can handle problems and “who wouldn’t shy away from hard work.”

Searching for God in the city of angels
Cecilia González-Andrieu

For this, they really appreciated Senators Warren and Klobuchar. They saw in them a mixture of confidence and experience that could translate well to the role of president. “Warren is a hard worker,” one student said. “You can relate to her, and it’s not like she’s trying to be cool. It’s just that she’s saying exactly what she feels.” They also valued that some of the candidates committed to changing campaign finance laws and provided the clarity that unless the power brokers are changed in Washington, the laws needed to help the most vulnerable will never be passed.

As the night winds down, there is no jubilation as we say goodbye. We hug, and the students head off in multiple directions to be with their families at Christmas. We are all painfully aware of how much this coming election could hurt the world or begin to heal it. These students are among those who will be most affected: immigrants, brown, young, looking at a planet that we have the power to heal but lack the will to do so. Then one of them turns and quietly says, “I feel safety.” “How do you mean?” I ask. “As long as it’s one of them,” the student says of the Democratic candidates, “there’s safety in that.”

Show Comments ()
Comments are automatically closed two weeks after an article's initial publication. See our comments policy for more.
Show Comments ()
Join the conversation: Login or create an account
Before you can comment, you need to update your profile to include your first and last name, as required in our comments policy. Then reload this page and you'll be set up for commenting. Update your profile
More: US Politics / Jesuits

Cecilia González-Andrieu is an associate professor of theological studies at Loyola Marymount University, Los Angeles, Calif., and a contributing writer for America.