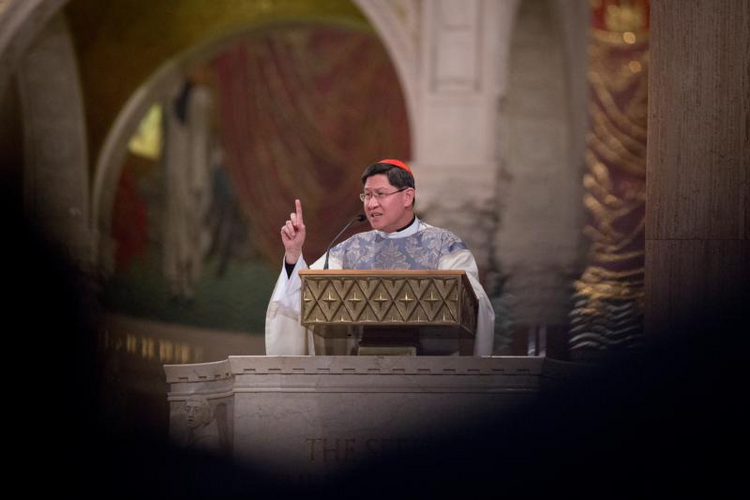 Cardinal Luis Antonio Tagle of Manila, Philippines, shown during a 2014 Mass at the Basilica of the National Shrine of the Immaculate Conception in Washington, said evangelization can happen even in shopping centers. The cardinal celebrated Mass in a shopping mall in Manila on Dec. 17 with hundreds of people in attendance. (CNS photo/Tyler Orsburn)

MANILA, Philippines (CNS) -- It might be "unbelievable" to people in other countries, but a Catholic chapel inside a shopping mall and thousands of people attending Mass there have become a new norm among Filipinos.

Cardinal Luis Antonio Tagle of Manila, the incoming prefect of the Congregation for the Evangelization of Peoples, said evangelization can happen even in shopping centers, ucanews.org reported.

"They cannot believe that evangelization can happen in commercial centers," added the prelate, who celebrated a Mass at the Chapel of the Eucharistic Lord in a shopping mall in Manila on Dec. 17.

"They cannot believe that every first Friday there is a Mass in offices, banks," he said.

"(People at the Vatican) probably want to understand why this is so," added the cardinal, who Dec. 8 was named head of one the Vatican's most influential offices.

"This is your fault," Cardinal Tagle joked, drawing laughter from the faithful. He then appealed for prayers for his new church assignment.

"I ask for your prayers," he said, adding that "everything is still unclear. ... But when is life clear? It is not always clear."

He said the observance of Advent by Catholics "is good because we have Mary, Joseph, John the Baptist all operating in the darkness of faith in the hope that the light will come."

As head of the Congregation for the Evangelization of Peoples, Cardinal Tagle will direct mission work in most areas of Africa, Asia and Oceania. The congregation is also tasked with "re-evangelizing" the old Christian world.

Church leaders across Asia have welcomed Cardinal Tagle’s appointment, describing it as a "blessing" not only for the Philippines but for the region.

"He can bring his wisdom to the work of evangelization," said Manila Auxiliary Bishop Broderick Pabillo.

Archbishop Gabriele Caccia, the outgoing papal nuncio to the Philippines, said Cardinal Tagle is "in a position to take care ... of the evangelization of people."

Bishop Salvador Lobo of Baruipur, India, said the appointment comes at the right time when the "propagation of faith ... is taking place much more effectively" compared to other areas.

He said the church's evangelization work, especially in Asia, will "stand out" and will be given more attention under the leadership of Cardinal Tagle.

Show Comments ()
Comments are automatically closed two weeks after an article's initial publication. See our comments policy for more.
Provide feedback on this article
Join the conversation: Login or create an account
Before you can comment, you need to update your profile to include your first and last name, as required in our comments policy. Then reload this page and you'll be set up for commenting. Update your profile
Advertisement
More: Asia / Evangelization