The Editors: We need to take the threat of nuclear arms more seriously 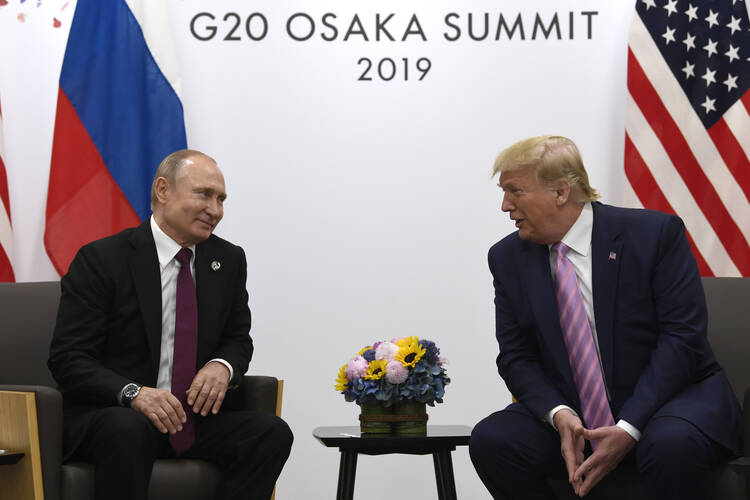 In this June 28, 2019, file photo, President Donald Trump, right, meets with Russian President Vladimir Putin during a bilateral meeting on the sidelines of the G-20 summit in Osaka, Japan. Delegations from the U.S. and Russia met to discuss arms control and the possibility of coaxing China into negotiating a new, three-way nuclear weapons pact, two senior administration officials said on July 15, 2019. (AP Photo/Susan Walsh, File)

“Russia wants to make a deal very much on arms control and nuclear, and that’s smart, and so do we,” President Trump told reporters at the 70th-anniversary celebration of NATO in London on Dec. 3. Those were welcome words—words that now need to be backed up with action.

In August, Mr. Trump removed the United States from the Intermediate-Range Nuclear Forces Treaty, claiming that Russia had developed weapons in violation of the agreement (a charge denied by Russia but echoed by other member nations of NATO). Now, one of the few remaining arms control agreements that limit the arsenals of the two Cold War powers—New START, signed into law by President Obama in 2010—is in jeopardy.

The treaty expires in February 2021 and would take years of negotiations to revise. The deal that Russia very much wants is to extend the treaty for five years, which requires only the mutual agreement of both presidents. Mr. Trump’s negotiating team has not responded to Russia’s offer, as the president appears to want a more ambitious trilateral deal that involves China—a deal that does not interest China. However worthy that goal may be, Mr. Trump should not risk allowing New START to expire as the world teeters on the brink of a new nuclear arms race.

Mr. Trump should not risk allowing New START to expire as the world teeters on the brink of a new nuclear arms race.

This slow-walking by the Trump administration is emblematic of a wider lack of urgency in the United States about the threat posed by nuclear weapons. Following Mr. Trump’s withdrawal from the I.N.F. treaty, George Shultz, who served as President Reagan’s secretary of state, said, “When something like the I.N.F. goes down the drain almost like nothing, it shows you the degree to which people have forgotten the power of these weapons.” It is, in a way, understandable. Amid global threats like climate change and more immediate dangers like mass shootings, Americans have plenty of other concerns to keep them up at night.

Pope Francis: Peace and international stability are incompatible with attempts to build upon the fear of mutual destruction or the threat of total annihilation.