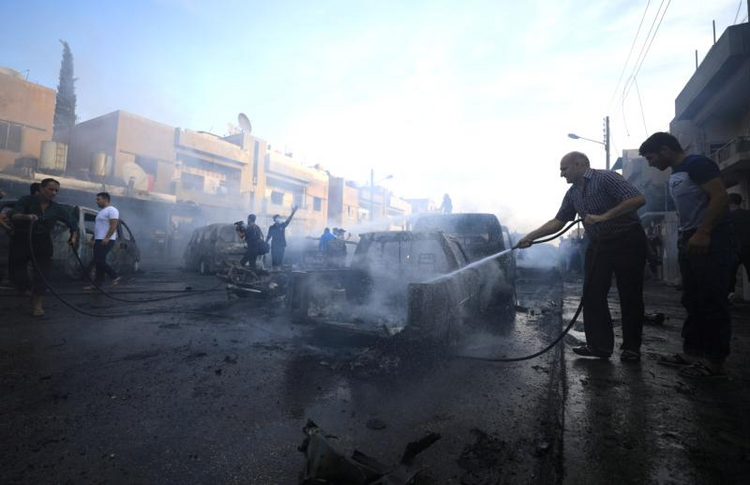 AMMAN, Jordan (CNS) -- Church bells have been ringing in Qamishli and elsewhere in northeastern Syria, signaling the alarm to Christians and others of the ongoing Turkish military operation that is having a devastating humanitarian impact on civilians.

"Hundreds of thousands of people have escaped," said Yerado Krikorian, communications assistant for the Catholic aid agency Caritas Syria, which is working around the clock to aid those displaced by Turkish bombing and shelling.

"They need water where they have fled, and so Caritas is distributing badly needed water bottles and other essentials to those displaced in shelters throughout the Hassakeh region," Krikorian told Catholic News Service by telephone from Damascus.

Some 70,000 children have been displaced since hostilities escalated Oct. 7

The A'louk water station, supplying water to nearly 400,000 people in Hassakeh, is out of service, according to UNICEF. The organization and Syrian government are is trying to get it fixed.

Meanwhile, UNICEF warns that some 70,000 children have been displaced since hostilities escalated Oct. 7, but it expected that number to more than double as a result of ongoing violence. As of Oct. 15, the United Nations estimates that at least 160,000 people have been displaced, but 400,000 are in need of humanitarian aid as the Turkish military and its allied Syrian rebels, including Islamic State and al-Qaida militants, press deeper into northeastern Syria, battling Kurdish and Syriac Christian forces.

Christians and other religious minorities said they feel particularly vulnerable as Turkish artillery targeted a predominantly Christian neighborhood in Qamishli, the largest city in northeastern Syria. News reports said Christians, Ayeda Habsono and her husband, Fadi, were severely wounded in the attack that hit their house. Several other residents also were injured. Christians and Yazidis have been victimized by Islamic State militants in recent times.

Humanitarians complain that they are being denied safe and unimpeded access to civilians due to Turkish shelling and airstrikes as well as uncertainty as to who is in control over certain areas, forcing many aid organizations to relocate to northern Iraq. Hospitals, schools and churches have been bombed. They have also decried targeted killings of civilians, including that of a Kurdish female politician, by Syrian militants working with the Turks.

Christians and other religious minorities said they feel particularly vulnerable as Turkish artillery targeted a predominantly Christian neighborhood in Qamishli.

Observers point to the danger of NATO member Turkey using proxy forces to carry out atrocities, deemed as war crimes.

David Miliband, head of the International Rescue Committee, condemned Turkey's offensive, designed to clear out the native population of Kurds, Christians and Yazidis to put 2 million Syrian refugees from other regions and now sheltering in Turkey into a so-called "safe zone."

"The so-called safe zone is becoming a death trap," Miliband warned. "And the winners of this are Islamic State and the Assad government.

"The northeast was one of the most stable parts of Syria," he said, before U.S. President Donald Trump announced in early October that he was withdrawing U.S. troops.

Trump has since called for an immediate end to Turkey's moves against the Kurds in Syria and has sent Vice President Mike Pence to the Middle East. The U.S. is "simply not going to tolerate Turkey's invasion of Syria any longer," said Pence.

Alarmed by the military onslaught on "beloved and martyred" Syria, Pope Francis called on "all the actors involved and the international community" to commit themselves "sincerely to the path of dialogue to seek effective solutions" to the crisis.

The pope said Oct. 13 that dramatic news was emerging about the fate of the populations forced to abandon their homes because of military actions. "Among these populations there are also many Christian families," he said.