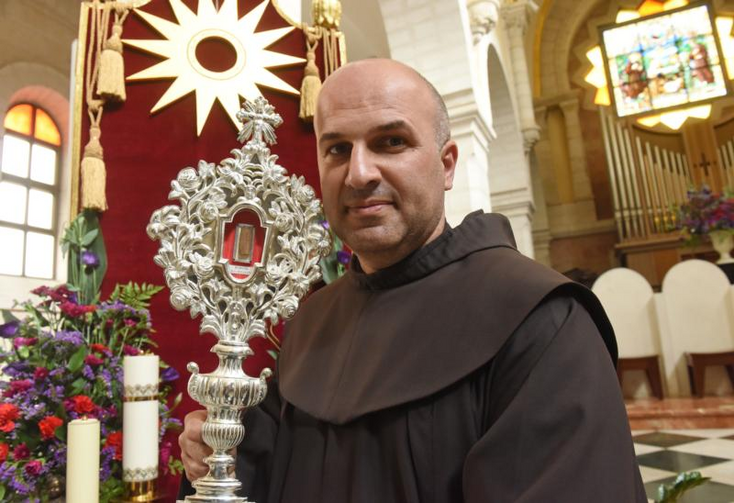 Franciscan Father Rami Asakrieh holds a reliquary containing what is believed to be a small fragment of Jesus' crib Dec. 1, 2019, in the Franciscan Church of St. Catherine, which is adjacent to the Basilica of the Nativity in Bethlehem, West Bank. Pope Francis gave the relic fragment to the Franciscan Custody of the Holy Land, which oversees the main churches and shrines associated with the birth, ministry, death and resurrection of Jesus. (CNS photo/Debbie Hill)

VATICAN CITY (CNS) -- As Advent approached, Pope Francis gave a small fragment of Jesus' crib back to Catholics in the Holy Land.

"This is more blessings for this place," he said. "You can't imagine the great joy to have this blessing."

On Nov. 22, experts from the Vatican Museums extracted a small fragment from the relic of what has been venerated as Jesus' manger. The relic, given to the Vatican in the seventh century, has been kept in a chapel under the basilica's main altar.

Pope Francis gave the relic fragment to the Franciscan Custody of the Holy Land, which oversees the main churches and shrines associated with the birth, ministry, death and resurrection of Jesus.

The relic arrived in Jerusalem Nov. 29 and was present during a Mass celebrated by the nuncio, Archbishop Leopoldo Girelli, in the chapel of Our Lady of Peace at the Notre Dame Center.

After the Mass and time for people to venerate the relic, the Franciscan friars carried it in procession to the Church of St. Saviour, where they recited vespers. The relic was transferred to Bethlehem Nov. 30 to be in place for beginning of Advent Dec. 1

"May the return to Bethlehem of this piece of holy wood arouse in us the profound desire to be bearers of God. Now it is our hearts that are a manger: the holy crib of God made man," said Archbishop Leopoldo Girelli, apostolic nuncio to Israel and Cyprus and apostolic delegate to Jerusalem and Palestine, at the handing-over ceremony to the Franciscan friars at Jerusalem's Notre Dame Center.

Reading a letter sent by Cardinal Stanislaw Rylko, archpriest of the Basilica of St. Mary Major, Archbishop Girelli said, "Pope Francis accompanies this gift with his blessing and with the fervid wish that the veneration of this illustrious relic can open the hearts of many men and women, adults and youngsters, the elderly and children, to receive with a renewed fervor of faith and love the mystery that changed the course of history. The Holy Father wishes, in particular, that the message of peace announced by the angels on the night of Christmas to the men loved by God, which for 2,000 years has rung out from Bethlehem, brings the gift of peace and reconciliation which our world needs more and more."

Local Catholics in Bethlehem had the opportunity to venerate the relic at Mass at St. Catherine's Dec. 1 before the relic was put away until a proper location and protocol for it can be arranged.

Meanwhile, as Christmas approached, the opening hours of the Church of the Nativity adjacent to St. Catherine had been extended by three hours to 8 p.m. to accommodate the influx of pilgrims who sometimes had to wait up to four hours to go down to the grotto where, according to Christian tradition, Jesus was born.

On the first day of Advent, the wait was only about one hour.

"We are going to wait as long as it takes to go in," said David Williams, 67, of Texas as he waited in line with his tour group and a local guide. "It is very exciting. This is what you read, and when you read it again after having been here there will be new insight."

Local guide Jaber Saadeh, said that as a Christian he was happy to see the large number of pilgrims coming to Bethlehem.

"I feel so proud and happy to welcome them. We are a peaceful country," he said.

Coming out from the grotto, Claudia Haita, 44, of Romania, said the wait had not been an issue. Having the opportunity to visit the grotto and say a prayer there had been "good for my soul as a Christian" and strengthened her faith, she said.

Another pilgrim who identified herself only as Maria said she had been overwhelmed by the experience.

"I had an overwhelming feeling of tears of joy but also a feeling of sadness because of the hurting of humanity, of the suffering. It is time to let that go," she said.