Best place to be a woman? Look to Scandinavia

Best place to be a woman? Look to Scandinavia 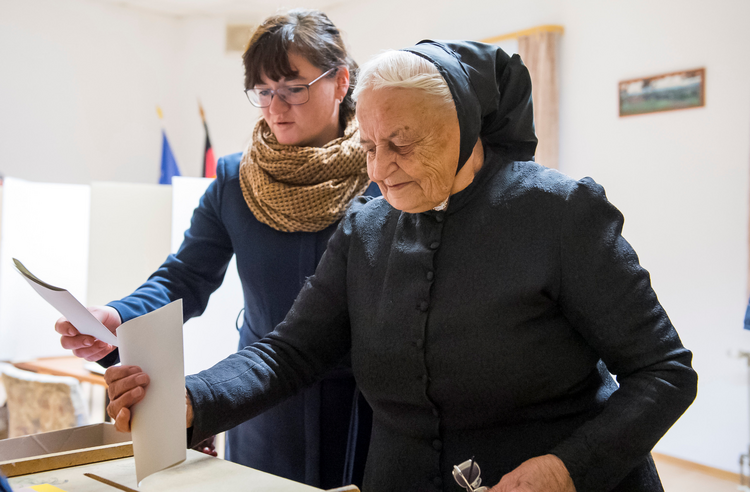 Women casts their votes in 2017 at a polling station in Crostwitz, Germany. (CNS photo/Matthias Rietschel, Reuters) )

Norway may be the best place to be a woman in the world. The worst place could be Yemen, a nation wracked by years of civil war and social disorder. That is according to the Women Peace and Security Index released on Oct. 22 in a presentation at the United Nations in New York. With 1 being the best possible score, Norway earned .904 on the W.P.S. Index; Yemen earned a score of .351.

The good news, according to the index’s authors, is that “trends in women’s empowerment are heading in the right direction globally. Some 59 countries recorded significant progress since the first edition” in 2017, “while only one country (Yemen) experienced major deterioration.”

Another welcome change was a drop in the number of deaths of women attributable to organized violence, “due largely to lower levels of state-based conflict.” Index researchers said, “De-escalation is driving the overall declines rather than fewer conflicts.” The number of conflicts actually rose between 2017 and 2018, from 52 to 54, “the highest number on record.”

W.P.S. Index researchers add that as many as two-thirds of the fatalities because of organized violence took place in just two countries: Mexico and Syria.

The good news is that “trends in women’s empowerment are heading in the right direction globally. Some 59 countries recorded significant progress while only one country (Yemen) experienced major deterioration.”

“Data is crucial,” said Sarah Hendricks, director of the Programme & Policy Division at U.N. Women, “crucial for policy makers to make better-informed decisions” and crucial for advocates to better track progress. “It helps put political resources and commitment in the right place.”

Behind the numbers, she said, “are the real lives of women and girls around the world.”

Ms. Hendricks added that reports like the W.P.S. Index this year have helped alert U.N. officials to record levels of political violence targeting women and other issues affecting women around the world. She learned that while “girls make up half of the school age refugee population, they are only half as likely as boys” to be enrolled in education opportunities that are made available to refugee populations.

The index, compiled by the Georgetown Institute for Women, Peace and Security in partnership with the Peace Research Institute of Oslo, is intended as a guide for policy makers and advocates to locate areas of concern and assess progress for women in the nations so far included in the ranking.

This is the second release of the index. It was first published in 2017, and researchers plan a third report for 2021. The W.P.S. Index ranks 167 countries on women’s equality and tracks trends in women's well-being across 11 categories.

The United States just made it into the index’s top 20, ranking 19 overall in the world. It trailed many European states, including Estonia and Slovenia, and scored lower than Canada, ranked 11, and New Zealand, ranked 14. Compared to its peer nations, the United States’ low percentage of women in Congress, higher rates of intimate partner violence and lower rating for “community safety” hurts its ranking the most.

Jeni Klugman, the managing director of Georgetown University’s Institute for Women, Peace and Security, said a statistically significant association between rates of intimate partner violence in societies with other forms of violence, including willingness to resort to armed conflict, stood out in the rankings this year. She admitted that teasing out correlation and causation in such relationships was difficult, but she suggested the question of how a generalized acceptance of violence against women influences a societal willingness to resort to other forms of violence is worth exploring.

One civic activist from Pakistan attending the release conference, noting a correlation between “organized violence” and intimate partner violence against women, observed, “States persecute us when societies allow persecution against women.”

The index’s researchers report that in South Sudan at least 47 percent of women experienced intimate partner violence in the past year, a global high, while Singapore and Switzerland, at below 1 percent, maintained the world’s lowest rates. Regionally, the share of women who experienced violence at the hands of an intimate partner over the previous year is lowest in Central and Eastern Europe and Central Asia at 7.1 percent, and Latin America and the Caribbean at 7.8 percent. It is highest in Sub-Saharan Africa and South Asia—both exceeding 20 percent.

The report is based on criteria related to the U.N. sustainable development goals, adopted by U.N. member states in 2015. According to the study, “fronts where too many countries lag far behind the global averages” include “women’s parliamentary representation and employment.”

Globally, women hold just one fourth of legislative seats. Women in Rwanda scored the highest political representation with 56 percent, while in Papua New Guinea women have no seats in the national legislature. In 18 countries the share of women in parliament ranged in the single digits. The index also reports that the global gender gap in employment remains wide, at 30 percentage points, “with regional gaps averaging 68 percentage points in South Asia and nearly 60 percentage points in the Middle East and North Africa.

Trailing Norway to the top position, according to the report, were Switzerland, Denmark, Finland and Iceland, suggesting a solid showing on women’s inclusion and well-being in Scandinavian states. South Sudan, Pakistan, Syria and Afghanistan scored just above Yemen to the bottom of the rankings, which was crowded with states from North Africa and the Middle East.

As the Amazon Synod nears the end, a Brazilian bishop makes the case for women deacons
Luke Hansen, S.J.

Caring for the most vulnerable: undocumented women in abusive relationships
Christauria Welland

Gender inequities around the world continue to do women harm. “Some 600 million women of working age around the world say that they are unable to take on paid work because of unpaid care responsibilities,” the researchers found. Countries that rank high on the W.P.S. Index “tend to have a more equitable distribution of unpaid work between men and women and...countries with the least equitable distribution tend to rank low.” Conflict, poverty and discriminatory employment laws or low rates of social and political inclusion, especially in paid employment, typified the index’s low performers, but the analysis also found notes of improvements for women even in problematic states.

Afghanistan did not score well on most measures of well-being for women, but with more than 27 percent of its seats in parliament held by women it performed better than most other states in its region and even better than the United States, which could only report just under 24 percent congressional representation by women.

According to the report, challenges to women’s overall well-being globally are greatest in “fragile and conflict-affected countries, especially in the security dimension. All the current bottom dozen ranked countries except Pakistan are classified as fragile and conflict affected, and six are in Sub-Saharan Africa.”

This second iteration of the index for the first time drills down to the local level for comparisons in several complex high-population states: China, India and Nigeria. The index draws on authoritative international data sources to build a comprehensive measure of women's well being and their empowerment in homes and communities.

The report also looked at differences in educational attainment, financial inclusion, employment and cell phone use. Measuring performance according to justice, it tracks legal discrimination of women, “son bias” in childbirth and discriminatory work norms. Under women’s security, nations were ranked according to rates of intimate partner violence, community safety and “organized violence” by measuring the rate of women’s mortality in active conflict zones.

I suggest interested readers read Factfulness by Hans Rosling for statistics on all sorts of achievement world wide. amzn.to/2SM5vTb

Interesting, it is free market capitalism that indicates where on the scale a country lies. All of the top 40 are European, North American, or two ex British colonies plus Israel, Singapore, Japan and South Korea. Norway which leads the list has free energy and a small population. Of the top ten, 9 are small countries. At 45, Costa Rica. is the top Latin American nation,

Needless to say Jen, a Swedish woman who actually lives in Sweden, disagrees with Kevin... https://youtu.be/oZCCXZz5Esw

Does the author believe that females are dwelling in sinless perfection if they are materially poor, mistreated or disenfranchised?

Not much difference between the sentiments expressed by him and the Noble Savage nonsense of the Romantic poets and artists depicting the humanism of their day. .

Best place to be a woman? Look to the democrat party perhaps. Norway (WPS #1 ranking) and Finland (WPS #3) each have 40% Parliamentary representation – seats held by women. For democrats in congress, women have 38% representation. For republicans, women representation in congress almost makes the bottom ten (154 out of 167 countries in the WPS Index).