Pope Francis: Food is becoming an avenue of personal destruction 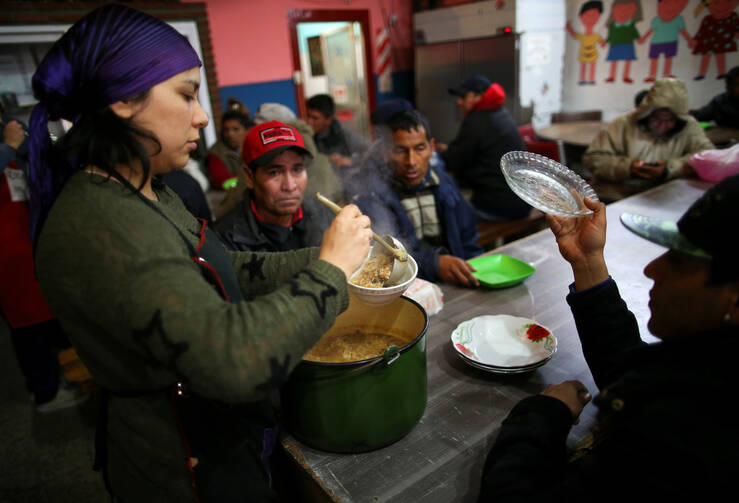 A volunteer serves a meal at a soup kitchen in Buenos Aires, Argentina, Oct. 4, 2019. Resolving the global crises of world hunger and malnutrition demands a shift away from a distorted approach to food and toward healthier lifestyles and just economic practices, Pope Francis said in an Oct. 16 message. (CNS photo/Agustin Marcarian, Reuters)

Pope Francis has again condemned the relegation of food “to a mere commercial product subject to financial speculation” that results in a global contradiction: Even as some 800 million people suffer from hunger and malnutrition worldwide, another 700 million people are obese, “victims of improper dietary habits.”

In a letter to Qu Dongyu, the first-ever Chinese director general of the Food and Agricultural Organization of the United Nations on the occasion of the annual World Food Day on Oct. 16, the pope declared that “the battle against hunger and malnutrition will not end as long as the logic of the market prevails, and profit is sought at any cost.”

Pope Francis emphasized the need for “a conversion in our way of living and acting.” He said, “we must come to realize that what we are accumulating and wasting is the bread of the poor.”

World Food Day is sponsored by the F.A.O. to draw attention to the plight of so many hungry people and to highlight the need for greater action against hunger. Each year F.A.O. chooses a theme to celebrate this day. For this year it is: “Our actions are our future. Healthy diets for a #ZeroHunger world.”

Pope Francis emphasized the need for “a conversion in our way of living and acting.” He said, “we must come to realize that what we are accumulating and wasting is the bread of the poor.”

Francis said the theme highlights “the distorted relation between food and nutrition.” Indeed, he said, “we are in fact witnessing how food is ceasing to be a means of subsistence and turning into an avenue of personal destruction.”

He emphasized that those who are overweight “are no longer simply a byproduct of the diet enjoyed by peoples blessed with abundance.” They are also “found in poorer countries too, where they eat little, but increasingly [they eat] poorly, since they imitate dietary models imported from developed areas.”

He pointed out that “due to poor nutrition, pathologies arise not only from the imbalance caused by ‘excess’, often resulting in diabetes, cardiovascular diseases and other forms of degenerative diseases, but also by ‘deficiency,’ as documented by an increasing number of deaths from anorexia and bulimia.”

Pope Francis called for “a conversion in our way of living and acting” and stated that “nutrition represents an important starting point.” He said, “Nutritional disorders can only be combated by the cultivation of lifestyles inspired by gratitude for the gifts we have received and the adoption of a spirit of temperance, moderation, abstinence, self-control and solidarity.”

He recalled that “these virtues, which have accompanied the history of humanity, summon us to a more simple and sober life and unfailing concern for the needs of those around us.”

By adopting such a lifestyle, he said, “we will grow in a fraternal solidarity that seeks the common good and avoids the individualism and egocentrism that serve only to generate hunger and social inequality.” This is the way “to cultivate a healthy relationship with ourselves, with our brothers and sisters, and with the environment in which we live.”

In the letter, Pope Francis emphasized the primary role the family has to play in developing such a lifestyle, thanks especially to “the particular sensitivity and wisdom of women and mothers.” He noted that the F.A.O. recognizes this by the attention it gives to protecting rural families and promoting family farming.

Pope Francis, quoting from his encyclical “Laudato Si’,” said, “It is a cruel, unjust and paradoxical reality that, today, there is food for everyone and yet not everyone has access to it, and that in some areas of the world food is wasted, discarded and consumed in excess, or destined for other purposes than nutrition.”

In order “to escape from this spiral,” he said, “we need to promote economic institutions and social initiatives which can give the poor regular access to basic resources.”

He concluded by saying: “In the fight against hunger and malnutrition, our first concern should always be the human person: concrete men, women and children, especially those who lack daily food and have a limited ability to manage family and social relationships.”

Furthermore, he said, “when priority is given to the human person, humanitarian aid operations and development programs will surely have a greater impact and will yield the expected results.”

There is no global crisis in world hunger.
The overall number of hungry people in the world is dramatically lower than a century ago.
The difference is entirely due to the spread of the scientific and technical discoveries and inventions of the civilisation which until recently could be called Christendom. (Oil driven ploughing, harvesting, transport, refrigeration, storage, pesticides ... you know, all the modern evils!)

During the last century, a vast number of people in the Soviet Union and in mainland China died by the perverse will or the blind stupidity of evil ruling regimes or individuals and elsewhere due to warfare and disruption of perfectly good food producing communities.

On the other hand, obesity is rife amongst the less affluent in the richest communities.
Do we solve that with a one-line aphorism? Gluttony?
Those who study obesity in the rich world are not so sure.

It is awfully convenient of you to suggest that 800 million people suffering from hunger is not a crisis. If you were one of those 800 million I think you would have a different perspective.

According to your criteria, the world was in crisis for more than 10,000 years. For example, 200 years ago it was 98%. Now it is less than 10%. We should rejoice in this progress and double down on what led to the over 6 billion people who are not currently worried about hunger. There is enough food, politics is the main reason this small percentage are still hungry, Nothing the Pope is recommending will help. That is the sad thing.

Food is a tricky commodity. If consumed with due respect, it can add life to our lifespan. If not, then it can lead us to a grave crisis.

The world is eliminating poverty but the Pope wants to get rid of what achieved this result. A little over 200 years ago there was about 1 billion people in the world and 98% of the world lived on meager diets and had short harsh lives. This changed because freedom came to a small group of people. Now there are 7 billion people and enough food to feed everyone and the Pope wants to eliminate the way this happened. I’m sorry that is a stupid idea and has nothing to do with religion. The Jesuits on America admitted the Pope was a communist about a month ago. Here is another example of this.

The way to eliminate poor food habits is promoting the ideas that led to so much prosperity not central planning and collectivization which led to the death of over 100 million people in the 20th century. This is something religion should definitely stay away from. The expertise of the Catholic Church is morality not politics, economics or social planning. No matter what the Pope recommends it will be wrong and Catholicism will be tied to it. Chesterton said a 100 years ago, “Wed a culture and you will soon be a widower”

There is a photo above of a soup kitchen in Argentina. About a hundred years ago Argentina was as prosperous as the United States. It then went for socialism and now lags far behind the United States. It must be white privilege as Argentina is the most Caucasian country in the world outside of Europe and even whiter than many European countries.

It is hard to take seriously a person who is so committed to his visceral ideological impulses that no amount of data could ever convince him to rethink his assumptions. Any number of charts readily available on the Internet will make a compelling case that things have improved greatly since 1800. But since these charts and data do not support the desired narrative, they will just be ignored. After all, as Fr. Spadaro has aptly pointed out, if the party line requires that 2+2=5 then "5" it shall be.

Well bless Pope Francis! Goodness, how he is trying to save us. Now he tells us what to eat, where to live, who to love (migrants illegally entering a country but not so much anyone else), why he even tells us how to speak ("We have fallen into the culture of adjectives and adverbs, and we have forgotten the strength of nouns,"). All roads, except for the path of personal freedom, appear to lead through Francis. Sheesh!

Now I'm waiting for Francis to claim that a lack of exercise is a mortal sin as it destroys your body which is God's temple. Do you really think he will not??

I have to say, the naysaying and barbs delivered against Pope Francis in so many of the comments in America lead me to shout for joy. He must be on the right track.

His statements are supported by very little empirical data or logic, but the fact that they annoy the right class of people must make them true?