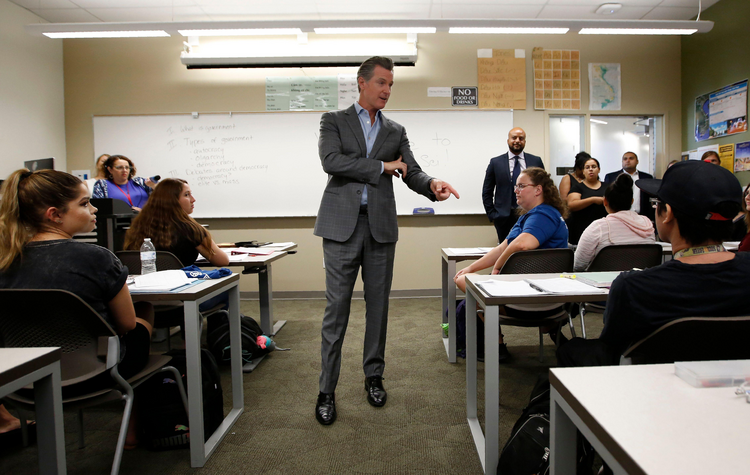 If signed into law, the “College Student Right to Access Act,” or SB 24, would take effect in January 2023. Newsom has until Sunday (Oct. 13) to make a decision.

Commonly known as “the abortion pill,” the prescription medication provides a nonsurgical process to end early pregnancy, for women who are less than 10 weeks along, by blocking hormones needed to sustain the pregnancy. While groups like the California Family Council claim the medication can be dangerous, scientific research has found it is safe and effective.

State Sen. Connie Leyva, a Democrat who authored the bill, said the legislation “reaffirms the right of every college student to access abortion.”

“By ensuring abortion care is available on campus, college students will not have to choose between delaying important medical care or having to travel long distances or miss classes or work,” she said in a statement.

Former California Gov. Jerry Brown vetoed a similar bill last year, saying such services were already “widely available” to students. Newsom, however, spoke in favor of the bill on the campaign trail.

Andrew Rivas, executive director of the California Catholic Conference, is advising people to pressure Newsom into vetoing the bill, which Rivas  described in a statement as “unprecedented and unnecessary.”

How the new Supreme Court term will impact the future of immigration, religious freedom and more
Ellen K. Boegel

The California Catholic Conference drafted a letter that people can submit to Newsom’s office. This piece of legislation, the letter states, is “written in such a way to exclude pro-life counseling.”

The California Family Council, an organization that works to “protect and foster Judeo-Christian principles in California’s laws,” urged its followers to call Newsom to discourage him from signing the bill.

Jonathan Keller, president of the California Family Council, criticized the state Assembly vote that moved the bill forward. He said it was just a way to “score points with Planned Parenthood.”

Catholics this summer were also called to pray as part of a statewide novena Aug. 3-11 that sought the intercession of Our Lady of Guadalupe to stop the legislation.

Bishop Jaime Soto of the Diocese of Sacramento initiated the prayer and said in a letter to diocese members that the bill is an “unprecedented intrusion on university campuses. It is unnecessary and only serves to further indoctrinate the young to the ideology of abortion.”

The Archdioceses of Los Angeles and San Francisco along with the Dioceses of San Bernardino and Orange were among those that participated in the prayer.

It’s estimated that up to 519 students at University of California and California State University campuses seek medication abortions every month at off-campus health care sites, according to a 2017 report by a UC San Francisco research group.

Sooner or later Pro-lifers are going to have to face the fact that limiting access and trying to criminalize abortion is not a constructive or even christian response to the demand and use of the practice of abortion.

When they do realize this, they can start to make a real difference in the amounts of abortions sought and therefore procured. Abortion restrictions, either by limits on access or legal rights, create more abortion in every country around the globe.

Please do the research and learn! Both the lives of the unborn and women depend on this.

There is a line between allowing and encouraging abortion that this policy dances on the edge of. The answer to abortion is free school, daycare and a living wage for students $2k month and their children $1k month each child. The debate over methods avoids real solutions. As for the Novena, prayer is for discernment, not Santa God. May those in prayer examine what they should be doing rather than asking God to manipulate others.