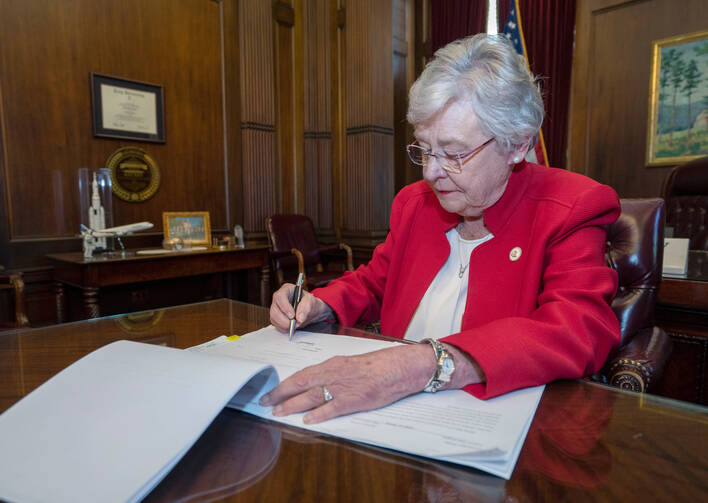 Alabama Gov. Kay Ivey signs into law a bill to ban abortion in nearly all cases at the state Capitol in Montgomery on May 15. (CNS photo/Office of the Governor State of Alabama handout via Reuters)

Gov. John Bel Edwards of Louisiana, a Democrat, signed into law on May 30 a measure that makes nearly all abortions in his state illegal once fetal cardiac activity is detected, adding Louisiana to the list of mainly Southern states that signaled a desire to overturn decades of abortion policy in the United States. Louisiana joins five other states—Mississippi, Georgia, Ohio, Missouri and Kentucky—that passed “fetal heartbeat laws” in 2019, which, if upheld by the U.S. Supreme Court, would essentially outlaw abortion after six to eight weeks.

Limits on abortion after 18 to 22 weeks of gestation were passed in other states this year, and on May 15 Alabama passed what is perhaps the nation’s most controversial new abortion law, a nearly total ban on abortion at any stage of pregnancy except in the case of a fatal fetal abnormality or lethal risk to a woman during pregnancy. The new law includes no exceptions for rape and incest. The Alabama ban is set to take effect in November but, like the other new limits, would only be enforceable after a Supreme Court decision overturns the Roe v. Wade decision (1973).

Nationally, abortion rates have been reaching historic lows and significant percentages of Americans continue to express support for restrictions on abortion as pregnancies approach fetal viability. While the sudden rush of limiting legislation has cheered many prolife advocates, some worry that the rush to ban or restrict abortion could backfire. Others wondered how prepared U.S. communities are to step in to assist women with unplanned or medically problematic pregnancies should Roe be abruptly overturned.

Learn more about the nation’s changing laws on abortion and what that suggests about a showdown over Roe v. Wade in Kevin Clarke’s updated comprehensive report. 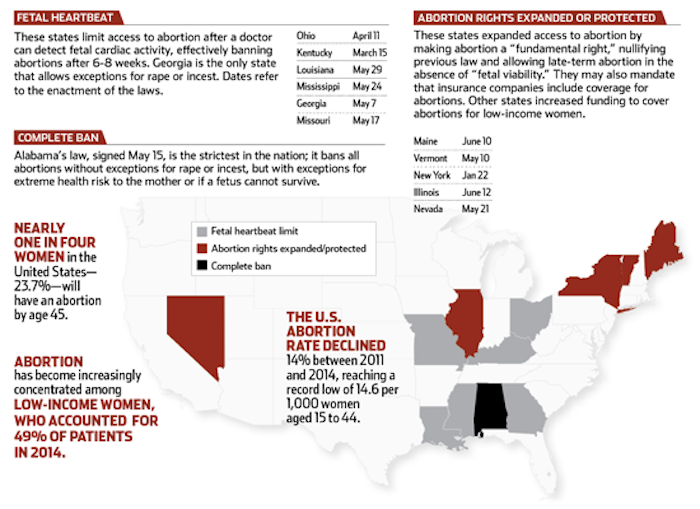 Notice that for all their talk about the poor, the only Democratic controlled legislature to protect the poorest of the poor is Louisiana. I wish the bishops would see that Democrats have never done anything to help the poor escape the welfare trap. Their only policy to reduce the poor is by abortion (half of all abortions).