U.N. Panel: Violence based on religious grounds must end.

U.N. Panel: Violence based on religious grounds must end. 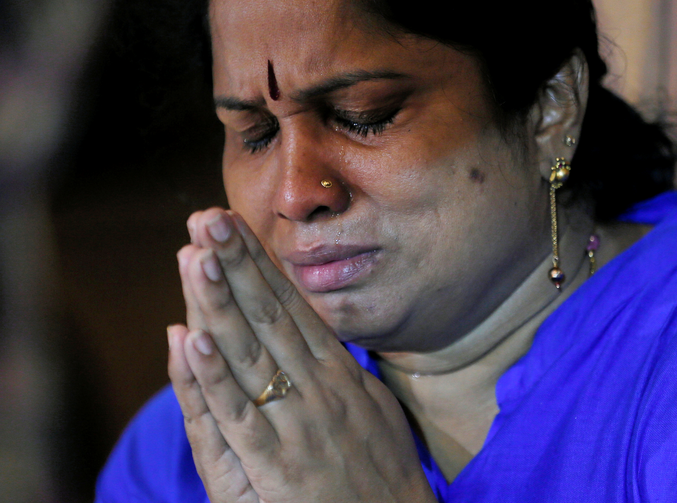 A family member of victims cries while praying during the reopening ceremony of St. Anthony's Shrine in Colombo, Sri Lanka, June 12, 2019, months after it was closed because of an Easter bombing. (CNS photo/Dinuka Liyanawatte, Reuters)

The European Union and representatives from seven countries denounced the worldwide persecution of Christians on Sept. 27 at the United Nations. The panel discussion, held during the 74th session of the U.N. General Assembly, was co-hosted by the permanent missions of Hungary and Brazil.

In his opening statement before the panel, Péter Szijjártó, the minister of foreign affairs and trade for Hungary, stated, “This is a fact that Christianity is the most persecuted religion all over the world,” a sentiment echoed in 2012 by Chancellor Angela Merkel of Germany.

An independent review completed in 2019 of Christian persecution, spearheaded by Anglican Bishop Philip Mounstephen of Truro, England, supported that claim and found that “[e]vidence shows not only the geographic spread of anti-Christian persecution but also its increasing severity.”

Cardinal Parolin saw the recent movement of exiled Iraqi Christians back to their homeland as “a sign that evil does not have the last word.”

In June 2017, the Pew Research Center reported that in 2015, Christians endured harassment in 128 countries but faced the most instances of harassment in Christian-majority countries.

Mr. Szijjártó said he believes that political correctness contributes to a lack of discussion on this topic. “In global politics, the fact that the Christians are persecuted is kind of being ignored,” he said. He also highlighted the efforts undertaken by Hungary to combat anti-Christian violence, which included providing aid to 1,000 Christians displaced by ISIS attacks in Teleskof, a northern Iraqi town on the Nineveh Plains.

Cardinal Pietro Parolin, the Vatican secretary of state, recalled his visit last December to Mosul, the Iraqi city ravaged and then captured by ISIS militants, who were driven out in 2017. “As I walked through the city of Mosul, there was still rubble everywhere, making it difficult to traverse,” the cardinal said. He saw the recent movement of exiled Iraqi Christians back to their homeland as “a sign that evil does not have the last word.”

“Our message is clear: violence based on religious grounds must stop,” said Eamon Gilmore, the European Union’s special representative for human rights.

The Lord Ahmad of Wimbledon, the United Kingdom’s minister of state for the Commonwealth, the United Nations and South Asia, broadened the scope of the discussion beyond the persecution of Christians. “Individuals all around the globe are persecuted and discriminated against because of their religious beliefs,” he said. The Lord Ahmad also said that it is because of his Muslim faith, not in spite of it, that he supports religious freedom for all people. He said that Islam is a peaceful religion and that he does not view attacks by ISIS as acts of faith. He called perpetrators of such violence “evil” and “demonic.”

Robert Destro, the U.S. assistant secretary of state for democracy, human rights and labor, explained how the United States aims to protect Christians from persecution, citing the intention of Secretary of State Mike Pompeo to establish an International Religious Freedom Alliance. “The United States believes people should live by the dictates of their conscience, not the dictates of the government,” said Mr. Destro.

Several of the panel’s participants represent nations that have been criticized for abuses by their increasingly authoritarian governments, including Brazil, Hungary and the Philippines. Prime Minister Viktor Orbán of Hungary has made evident his opposition to multiculturalism by promulgating a seven-point plan to restrict immigration.

During the panel discussion, Teodoro López Locsin Jr., the secretary of foreign affairs of the Philippines, spoke of “murdering fanatics” slaying Christians, criticized the Vatican for its response to anti-Christian violence and predicted that the “next Holocaust” will be Christian in character. He concluded his remarks with the following: “For those who do not fight for their faith and fellow faithful, go to hell.”

The human rights abuses and high number of “extrajudicial killings” that launched an investigation by the U.N in the Philippines were not addressed at today’s gathering. Nor did Ernesto Araújo, the minister of foreign affairs of Brazil, comment on exhortations to police violence by his nationalist president, Jair Bolsonaro. Mr. Araújo promoted a “new concept of democracy” and the need to battle “intolerance” toward Christians.

He also attacked climate change activism, calling it “a substitute religion” indicative of a “spiritual void.”

The main takeaway from the meeting, however, was articulated by Eamon Gilmore, the European Union’s special representative for human rights. “Our message is clear: violence based on religious grounds must stop,” he said.

“Violence, persecution and discrimination not only have to be condemned but prevented.”

“In June 2017, the Pew Research Center reported that in 2015, Christians endured harassment in 128 countries but faced the most instances of harassment in Christian-majority countries.”

Finally, someone dares to speak the truth and point out the obvious ...

Worthless article based upon a worthless unrepresentative institution.
Amongst Catholics, news that they were not being persecuted anywhere would be evidence of the worst kind of failure.

Yes.
Unrepresentative institution is UN which appointed panel of whoever that placed value on a statistical sampler the likes of which had Hillary a shoe-in for POTUS and other erroneous pseudo-scientific propositions.

To add insult to injury, they misrepresented the Pew findings as well. Ask Mr Google to show you the full report.

The "Islam is a peaceful religion" mantra is a joke. While Uighur Muslims are indeed being persecuted in China and this is not right, 80-90% of all Christian persecution news stories originated from Muslims from Nigeria, Algeria, Somalia, Egypt, Iraq, Iran, Indonesia, the Atlantic to the Pacific, where Christians are being assaulted, killed, burned alive, imprisoned, raped, dispossessed of homes, charged with blasphemy, forced into Islamic marriages, churches blown up, businesses destroyed, denied medical treatment -- and the list goes on -- by people yelling "Allahu Akhbar!" It would really help if Pope Francis could see his way clear to speak less about debatable global warming and a lot more about the condition of persecuted Christians. -Editor Facebook Praying for Persecuted Christians