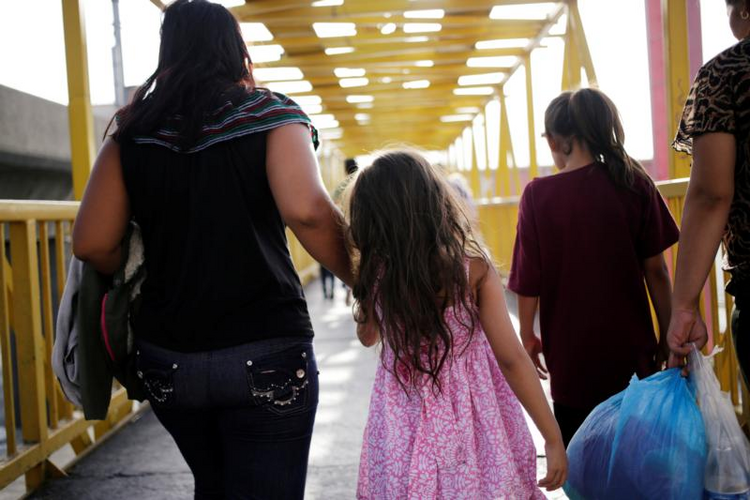 Central American migrants are seen July 31, 2019, returning from the U.S. to Nuevo Laredo in Mexico under the Trump administration's Migrant Protection Protocols to wait for their court hearing for asylum-seekers in Monterrey, Mexico. (CNS photo/Daniel Becerril, Reuters)

WASHINGTON (CNS) -- The Supreme Court issued an unsigned order late Sept. 11 that will temporarily allow the Trump administration to enforce its new rule preventing many Central American migrants from seeking asylum in the United States, while the legal battle over this issue continues to work its way through the courts.

The order temporarily reverses a recent lower court ruling that had blocked the administration's rule, which would deny asylum to anyone who traveled through another country while on their way to the United States without first seeking asylum in that country.

The U.S. Court of Appeals for the 9th Circuit had blocked the government from implementing the new rule in Arizona and California, but now it can be enforced across the country while the administration appeals a decision by a federal judge in California to the 9th Circuit and, if necessary, seeks a final decision on this issue from the Supreme Court.

Although it is not clear how soon the administration's policy can fully take effect, government leaders lost no time praising it on social media. "BIG United States Supreme Court WIN for the Border on Asylum!" President Donald Trump tweeted after the court's order was announced.

Ken Cuccinelli, the acting director of U.S. Citizenship and Immigration Services, also called the decision a big win and pledged on Twitter that his office "will commence implementing the asylum rule ASAP."

The nonprofit group Hope Border Institute, based in El Paso, Texas, said the court's decision reflects "a disturbing pattern that emerges when the Supreme Court starts using its power, however temporarily, to greenlight Trump's anti-immigrant agenda."

In a Sept. 12 statement, it said the "human impact of this decision will be devastating to thousands of refugees who see the possibility of safety, security and freedom at our nation's border and will instead now be greeted with cold disdain."

As in other instances when the court grants or denies temporary relief, the justices did not explain their decision or how the justices ruled. A requirement for a stay is that five judges must rule in its favor. The order noted the dissent of Justices Ruth Bader Ginsburg and Sonia Sotomayor.

In late July, the Supreme Court also issued an unsigned order saying the Trump administration could use $2.5 billion in Pentagon funds to pay for construction and repairs of a wall along the U.S-Mexico border. The order overturned an appellate court decision that froze the funds for border wall work involving building and replacing fencing and other projects in California, New Mexico and Arizona.

Sotomayor, in her five-page dissent in the Sept. 11 order, said the administration's ban on asylum-seekers "topples decades of settled asylum practices and affects some of the most vulnerable people in the Western Hemisphere" and comes at a time when the stakes for asylum-seekers "could not be higher."

She also criticized the high court's decision to step in on this issue, stressing: "granting a stay pending appeal should be an 'extraordinary' act."

In a public comment filed Aug. 15 with the Executive Office for Immigration Review, a group of more than 250 faith leaders and organizations called the rule a "a backdoor asylum ban" and urged the administration to end it.

"The rule fails to understand or acknowledge the realities of asylum-seekers' journeys and the lack of options they have been left with," said the leaders. "No one flees their home or country by choice."

"For those passing through Northern Triangle countries and Mexico, applying for asylum and waiting for a decision from a country that has little or no ability to process such claims may put the asylum-seeker at further risk of harm," the faith leaders said.