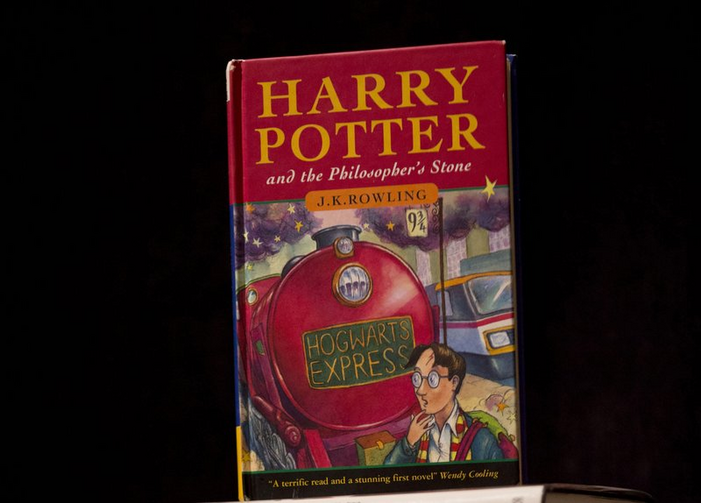 A May 20, 2013, file photo of a first edition copy of "Harry Potter and the Philosopher's Stone" (AP Photo/Matt Dunham, File).

NASHVILLE, Tenn. (AP) — A Catholic school in Tennessee has removed the Harry Potter books from its library after the school’s priest decided they could cause a reader to conjure evil spirits.

In an email obtained by The Tennessean , the Rev. Dan Reehil of Nashville’s St. Edward Catholic School said he consulted exorcists in the U.S. and Rome who recommended removing the books.

J.K. Rowling’s work tells us goodness can emerge from the most unexpected of places.
Jim McDermott

Reehil wrote, “The curses and spells used in the books are actual curses and spells; which when read by a human being risk conjuring evil spirits into the presence of the person reading the text.”

Catholic Diocese of Nashville superintendent Rebecca Hammel said Reehil has the final say at his school.

Hammel said she thinks the books by J.K. Rowling are still on the shelves of other libraries in the diocese.

I can see Reehil is a real deep thinker. This imbecile should be defrocked.

I don't agree with the decision but one assumes that there are public libraries in Nashville so it doesn't seem that big a deal.

Totally, right??
I mean, just because leaders of Catholic schools are seen publicly hiding the most popular children’s literature in the history of the world from children because of “Satan” in no way could have any negative impact on Catholics.
🙄🙄

Words do not fully describe the idiocy of this decision. Run, do not walk, from this parish.

I do wonder about the folks Rev. Reehil "consulted," I wonder even more if he read the books, or talked to any of the children who have read them -- with no evident incidence of "conjuring evil spirits" in any of these children. No doubt he is well-meaning, but perhaps he missed the larger message in these books: there is evil in life, yes, but there is also courage and grace, and redemption and conversion. And we have a choice about how to live. All in all, a good thing for children to know.

Why use one more area of censorship in an already dwindling Catholic School Roster Count. Reading is fundamental and kids know fantasy from reality. In being genuinely concerned & our likes of Rev. Reehil needs more Catholicism ventures on what is really daunting the very same parents evolving around their underestimated intelligent children.

This is not only embarrassing news for the Catholic Church, but Fr. Reehill needs to read more to learn how deeply Christian and Catholic the Harry Potter books truly are. I would recommend he begin with John Granger, Finding God in Harry Potter; then work his way up to Danielle Tumminio's God and Harry Potter at Yale. Like Narnia and Lord of the Rings, the Harry Potter series does more for sharing the heart of Christian faith than most homilies.